How Tetanus Vaccines Give Newborns a Fighting Chance in Yemen

In the midst of a humanitarian crisis, UNICEF and partners are working to protect mothers and babies from maternal and neonatal tetanus.

More than four years of armed conflict in Yemen have made life extremely difficult — particularly for mothers and children — in what was already the poorest country in the Middle East. Every two hours, a mother and six newborns die because of complications during pregnancy or birth.

Arwein Ahmed, 26, lives in the Malia district in Aden, Yemen, in a neighborhood filled with shanty homes made of cardboard, plastic sheets and other scavenged materials. Despite her impoverished circumstances, Arwein's 4-month-old son, Abdulrahman, is healthy and happy — a fact she attributes to the timely tetanus vaccination she received at a UNICEF-supported health care center during her pregnancy. 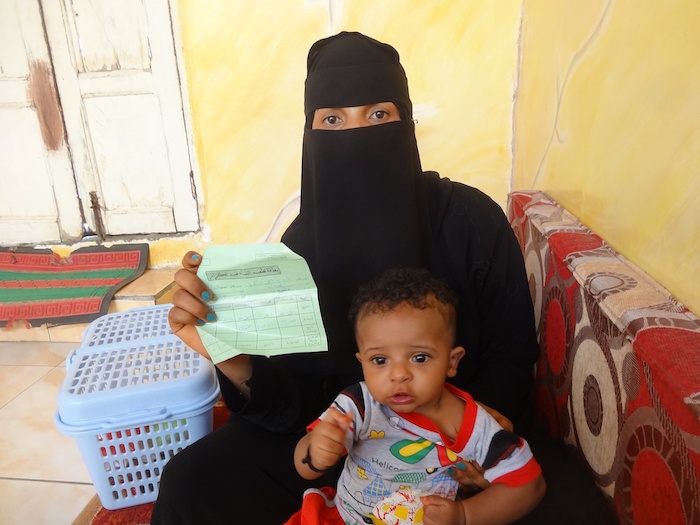 Arwein Ahmed, 26, holds the paper proving she was vaccinated against tetanus by UNICEF-supported health workers while she was pregnant with her son, Abdulrahman, who was born healthy as a result. © UNICEF Yemen/2017/Rasheed

"When I was pregnant, I was very anxious," she says. "I know of a woman in my neighborhood who lost her first child during delivery, a child she and her husband had been eagerly waiting for. They lost the baby because the local midwife used contaminated tools during childbirth."

Ahmed says she has heard several stories from prenatal caregivers about children who died during delivery. Most of the women who lost babies in childbirth had not been vaccinated against tetanus.

"That encouraged me to get the tetanus vaccination so my child could have good immunity and I could have a safe delivery," she says. "I visited the prenatal care center frequently and got my tetanus shots. You can see here my healthy little Abdulrahman is alive and kicking."

Tetanus is not passed from person to person, but through exposure to spores of the bacterium Clostridium tetani, commonly found in dirt. Mothers who give birth outside hygienic health facilities and who have not been immunized themselves are most at risk. Infants infected during or just after delivery suffer an excruciating death.

The World Health Organization (WHO) estimates that 30,848 newborns died from neonatal tetanus worldwide in 2017, the last year for which data is available. But tetanus is surprisingly easy to prevent through immunization and hygienic birth practices. A series of three shots provides immunity to a woman and protects her future children at birth. (As they grow, children need routine booster shots to remain protected.)

Before she became pregnant, Ahmed thought vaccines were only for children. "Now I know that all pregnant women and women of childbearing age should be vaccinated, too," she says. "It is critical and lifesaving."

Nurse Nada Al-abri, a prenatal care staffer at the Crater Health Facility, says that in rural areas and among largely impoverished communities, death during childbirth is common. Most of the recorded deaths have been linked to tetanus.

"I have worked in this prenatal care center for 15 years," she says. "Most of the people from marginalized sections think that vaccination is a luxury not meant for the poor. We need to create more awareness and make more efforts to disseminate information in the community. Awareness will encourage the community to embrace vaccines. The acceptance then needs to be linked with easily accessible and readily available free services." A UNICEF-trained health worker shares information with a group of women in Aden, Yemen to explain how immunization protects mothers and their children from preventable diseases like tetanus. © UNICEF Yemen

UNICEF is conducting a Communication for Development (C4D) campaign in Yemen to raise awareness about tetanus among adolescent girls and expectant mothers. The work is mainly carried out by locally recruited volunteers and community mobilizers.

In Al Dhale in the southern part of Yemen, 18-year-old Majida Mahmoud is one such volunteer. Popular and easygoing, she leads sessions with women in her village, urging them to get their tetanus shots. She speaks from the heart, and the women listen intently.

Majida lost her sister Amina to a miscarriage caused by tetanus. "I can never forget her face as she lay in pain, dying," she says. "Amina never took the vaccine. If she did, it could have saved her life and that of her child. Since then, I have pledged myself to promote the importance of the tetanus vaccine for all women between the ages of 15 and 49, to protect themselves and their babies."

Aiming to support the provision of essential health and nutrition services in Yemen and seeking to maintain the capacities of the national health system, UNICEF — under the Emergency Health and Nutrition Project (EHNP), in partnership with The World Bank and WHO — has been able to procure, bring into the country and distribute traditional vaccines in health facilities across Yemen. Through its C4D program, UNICEF works to ensure that women are aware of health risks and seek available health services.

UNICEF provides vaccines to hearly half of the world's children, saving an estimated 2 to 3 million kids from life-threatening diseases each year. With your help, UNICEF can protect every child from vaccine-preventable illnesses so they can survive and thrive.

If you are a member of Physicians Moms Group, please donate here.