The brutal Syrian war continues to target the youngest and most vulnerable.

This week's gas attacks in Idlib province, in northwest Syria, killed at least 27 children. A further 546 people, including many children, have suffered injuries, and casualty figures are expected to rise. Autopsy reports from Turkey confirm that the banned nerve agent, Sarin, was detected in at least three victims.

“The images of children choking and dying in the streets of Idlib, Syria, following alleged chemical weapons attacks, are as horrific as they are heartbreaking,” said UNICEF Executive Director Anthony Lake. “These attacks must do more than provoke our outrage; they must compel action by those with the power and the ability to bring an end to this devastating violence.”

“The alleged use of such a horrific weapon must not obscure the violence taking place elsewhere in Syria, including in Aleppo, Damascus and Hama, nor should it distract from the daily suffering of the more than 280,000 children trapped under siege, cut off from humanitarian aid,” Lake also said. “The children of Syria have already suffered far too much, for far too long.”

The moments after a gas attack in Syria: "They are dying" https://t.co/QkhqofqF1r pic.twitter.com/MwuSH0kFuT

“The senseless killing of children in Idlib serves as yet another reminder of how humanity is failing the children of Syria,” said Caryl M. Stern, President and CEO of UNICEF USA. “We are calling on all parties to the conflict and those with influence to put children first and end this horrific violence.”

UNICEF and partners continue to respond to the recent gas attack by supporting three mobile clinics and four hospitals that provide first aid and treatment, and nine ambulances to transport patients to area hospitals. UNICEF is also delivering critical medical supplies and working with health partners to raise awareness about the proper medical response to chemical attacks.

For these suffering children, what's at stake isn't politics. It's their lives and their futures. 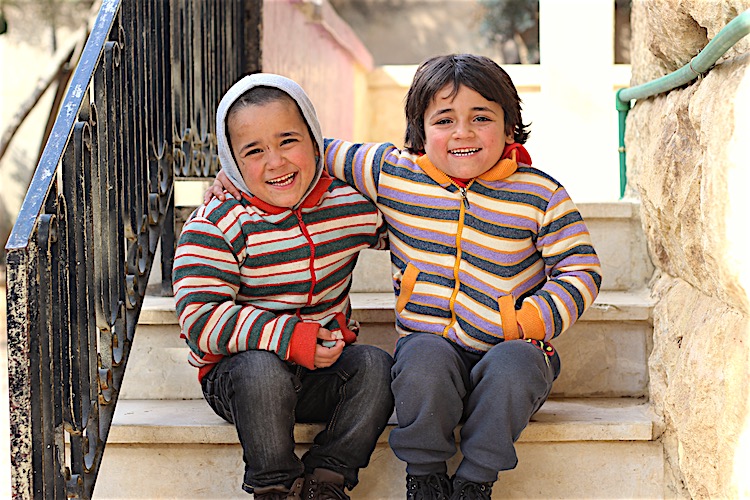 Zakariya, 6, and Doha, 5, smile as they sit on steps outside the UNICEF-supported home where they live in Aleppo, Syria. Both children were withdrawn when they first arrived at the shelter. Now, they’re happy to interact with other children. © UNICEF/UN056229/Al-Issa

UNICEF has been on the ground since the conflict began, helping to mobilize the largest humanitarian operation in history. We are working closely with our partners to provide education, water, health care and immunizations, physical protection, psychological support and clothing to children in Syria — and to Syrian refugee children in Turkey, Lebanon, Jordan, Egypt, Iraq and Europe.