Almost one-third of all detected trafficking victims are children. The vast majority are girls. Here is one girl's story.

Human trafficking steals lives. Around the world, an estimated 40 million people — one-fourth of them children — are caught up in the multi-billion-dollar industry sometimes referred to as 'modern day slavery.'

Wherever there is conflict, poverty and hunger, there are vulnerable people ripe for exploitation. With more countries embroiled in internal and international fighting now than at any time in the past 30 years, child soldiers, forced labor, child marriage and commercial sexual exploitation are all on the rise.

The vast majority of detected trafficking victims are girls and women

Traffickers operate in the shadows, so exact numbers are difficult to obtain, but the vast majority of detected trafficking victims worldwide are girls and women, according to a United Nations Office on Drugs and Crime study drawing on information from 142 countries. Of these identified cases, almost three-quarters of all trafficked women and girls are recruited for sexual exploitation.

In West Africa's Lake Chad region, Nigeria's Boko Haram insurgency has taken a drastic toll on the lives of millions of families. Children have been abducted, killed, even used as suicide bombers. Electricity, clean water, health care and schools are in short supply. Drought has threatened food supply, leaving an estimated 2 million children suffering from severe acute malnutrition, which can be fatal if untreated.

Thousands leave home every day in search of safety. Migrants put their lives in the hands of smugglers to reach the shores of Italy. Many become trapped in Libyan detention centers, where they are beaten, abused and indefinitely detained. Vulnerable young women and girls are lured by human traffickers with promises of paying jobs in Europe, then forced into prostitution.

Mary* was 17 when she left her home in Benin City, Nigeria for what she hoped would be a better life in Italy. This is her story:

"There is no hope in Nigeria," says Mary* sadly, in an interview with a UNICEF representative at the safe house where she now lives, on the outskirts of Taormina in Sicily. "My country is sweet and I love it, but I suffered a lot there and there was no future for me. My father is dead to me; I have no siblings. I don't have anyone to help me. I couldn't go to school. A woman said she would help me and send me to Europe and she introduced me to a man, Ben, who said he knew people who had restaurants to put me to work in. For the moment, he said he would pay my expenses.

They took us to a place they do juju. We had to swear to an old woman — a sorcerer — that we wouldn't run.

"The next day, Ben called me to his house. There were lots of boys and girls there. He took us to a place they do juju. We had to swear to an old woman — a sorcerer — that we wouldn't run. On March 17, I left for Libya. That place is very, very bad. They said we would be treated well, but it was a lie. A lot of the girls were raped. Ben took two of us girls one night. He gave the other girl to another man, and he said to me if I didn't sleep with him, he would give me to another man and not bring me to Europe. He raped me. Nigerian girls and women are trafficked to Italy with promises of work as cleaners or maids. After making the perilous trip, they are forced into prostitution in illegal brothels or on the side of the road. Walking through stinging nettles and trees, a visitor will hear whispered conversation behind blackberry bushes, groaning among the olive groves, and occasionally branches snapping as pimps run through the thick woods to avoid an interaction. ©UNICEF/UN062791/Gilbertson VII Photo

"I didn't have a phone, so I couldn't reach anyone in Nigeria. There was no way out. I was begging for them to feed us. I had to stay there for months until they called me to go on the boat. We went to sea and on August 11, 2016, we were rescued by the Italian coast guard. I was friends with a girl who had been deported and was making the journey for the second time, and she told me we were going to be used as prostitutes, and that I should not talk to the madams and that I had to stay inside the camp the Italians would put us in.

"I was thinking, 'I'm not going to work with my body, I don't want to sell it.' Since I was a little girl, I hated prostitution. When we arrived on shore, a woman, Gilda, who was a lawyer talked to me. I told her I owed a man named Ben money, and I was taken from the camp and put into a safe house.

Two weeks ago, they came to my mother's place and handcuffed her. They took her to a house and threatened her. They said they would do something very bad to her if I don't send money.

"Two weeks ago, they came to my mother's place and handcuffed her. They took her to a house and threatened her. They said they would do something very bad to her if I don't send money," Mary says, her voice breaking. "So now when she calls me I don't know what to say, so I have to shut my phone off. I'm so sad. I'm under so much pressure. I don't know what to do. 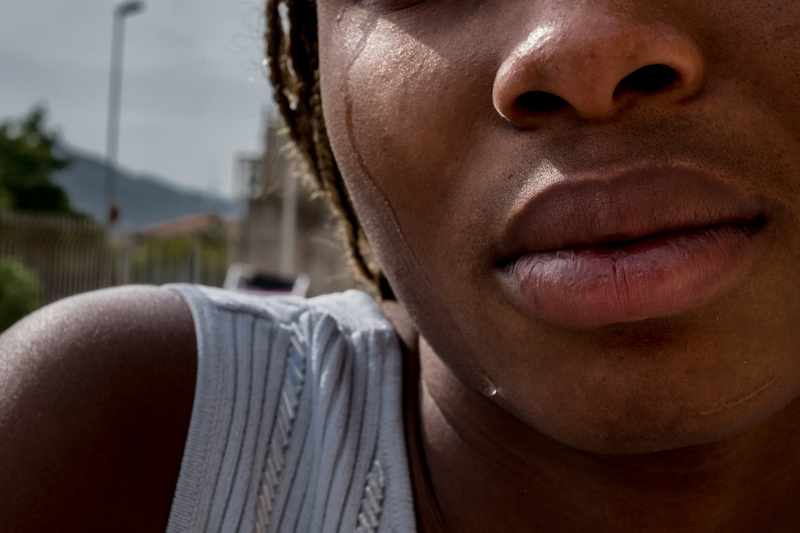 "What I'm passing through right now is so big, so serious, I see myself as a grown-up," says Mary*, a Nigerian teenager who was taken to Italy by sex traffickers. "I missed ever being a child." © UNICEF/UN061189/Gilbertson VII Photo

"I'm waiting for my documents, and then I can work, and everyone says I have to be patient. I don't know when I will go to the [asylum] commission to do my interview. I don't know anything. I feel like I'm going to be in one place forever.

"I can't go stand on the side of the road in the name of money," she says, her voice rising. "I have a future. Standing there, selling myself, would destroy my life. My dignity. Everything. What would I tell my children? How could I look in the eyes of a good man? Who would marry a prostitute?

"I have been inside here for so long," she says, crying. "I'm so very lonely. I just want to be happy, I just want to be free. I want it to be over, even for just one day. I need a peaceful place, and to feel the beautiful world. Sometimes I feel like giving up. I feel abandoned and rejected. I can't talk to the girls here. I can't tell them what's inside of me, and it makes me feel so old.

"One day I will have my documents, I will have an education, I will have work. My dream is to become a lawyer, to be able to help people. I want to give justice to the girls that have to use their bodies for work." 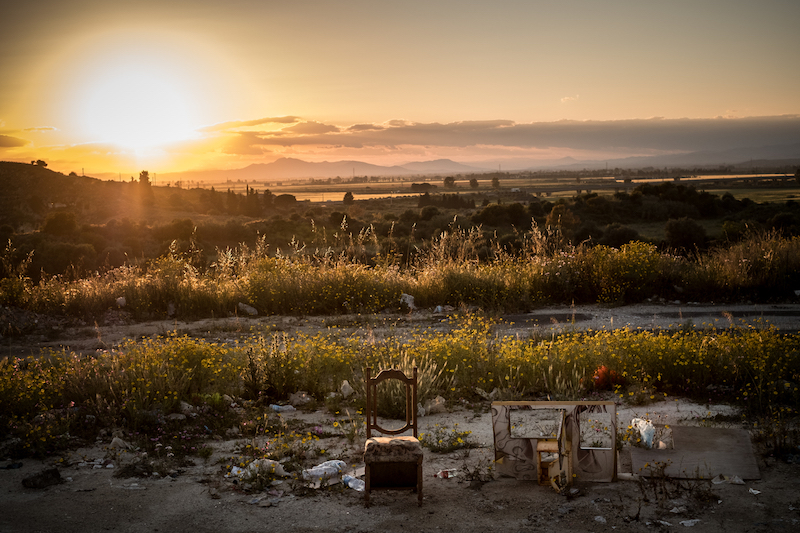 Women and girls forced into prostitution sit on chairs waiting for clients to pick them up in cars outside Catana, Sicily, Italy. They drive down tiny side roads into fields or up into hills behind a chemical industrial waste dump to have sex on discarded mattresses and on the hoods of cars. At sunset, when business slows, pimps come out of their hiding spots to collect their money and cram the women into small cars to drive them back to town. © UNICEF/UN062784/Gilbertson VII Photo

Desperate families and individuals caught in conflict and extreme poverty often have little choice but to risk exploitation in an effort to survive. On the move and unaccompanied, uprooted women and children are at increased risk of exploitation, trafficking and abuse.

How can I get involved to help stop child trafficking?

* Mary's name has been changed to protect her privacy.

Top photo: Women and girls trafficked for sexual purposes find shelter at a safe house run by the UNICEF-supported Penelope Association on the outskirts of Taormina, Sicily. © UNICEF/UN063817/Gilbertson VII Photo