The cast of the Broadway classic Fiddler On The Roof forged a creative campaign supporting UNICEF's work for child migrants and refugees.

The Broadway production Fiddler on the Roof has become a theater classic since it opened 52 years ago. The tale of a persecuted Jewish community in early twentieth century Russia shines a light on the plight of those forcefully displaced from their homes.

It is a subject that is sadly apt today, when worldwide, 65 million people — more than at any time since World War II — are on the run, fleeing conflict, poverty and war. Twenty million are refugees, half of these children. An additional 40.8 million people have been internally displaced — forced from their homes or communities in their own countries. And 10 million people are stateless, denied a nationality and access to basic rights.

As an actor playing a character who becomes a refugee, I couldn't ignore this crisis.

With an innovative fundraising campaign conducted both at the Broadway Theatre and via Twitter, the cast of the widely loved musical joined forces with Broadway Cares, an organization working to support efforts in the entertainment industry to respond to health issues and emergencies.

Fiddler on the Roof's cast members felt they were uniquely suited to build awareness of the global migrant and refugee crisis. After all, the emotional and colorful account they bring to life has the power to make audiences feel close to the stories of refugees and migrants today.

The depth of the crisis

The impact of the migrant-refugee crisis on Europe is a frequent subject of American and European media accounts — but the problem is severe in many parts of the world. In sub-Saharan Africa, an estimated 3 million refugees are running from conflicts in countries such as South Sudan, Somalia and the Central African Republic. And Asia harbors 3.5 million refugees and more than 3.3 million people who are displaced or stateless. 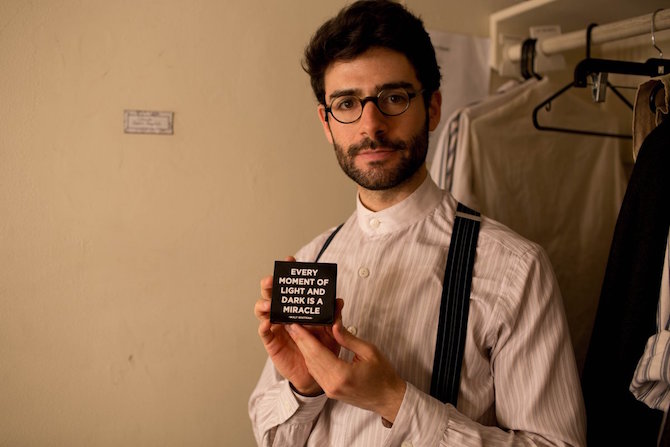 Adam Kantor plays the character of the poor, timid tailor Motel in Fiddler on the Roof. Motel lives the hardscrabble life of a young, disadvantaged and eventually displaced man — and later has the good fortune of being lifted from poverty.  Kantor, instrumental in the push to support UNICEF's work assisting child migrants and refugees, took the stage with other actors after performances to ask for donations.

Kantor has personal reasons for feeling close to struggles like the one depicted by his character. "As a descendant of refugees who landed in this country, and as an actor playing a character who becomes a refugee, I couldn't ignore this crisis," he says.

Stepping up to help children

"We knew that if audiences would be moved by the story of Fiddler On The Roof, they'd surely feel compelled to help refugees as well."

Kantor wasn't the only actor who identified with migrants and refugees. Many are descendents of the forcibly displaced, and all felt they needed to do something to help.

"Our director was really adamant that we be aware of the refugee crisis today throughout the rehearsal process," says Kantor. "Our costume design is actually based on images of Syrian refugees."

As it turned out, they were. "We made a post-show appeal for 6 weeks, mentioning that proceeds would go toward the children of the refugee crisis. The audience applauded each time they heard that."

The Fiddler on the Roof cast's Twitter campaign successfully gained support among fans moved to sympathy and compassion by Fiddler's vivid storytelling. The Twitter campaign offered to match UNICEF donations of $20 (capped at $15,000 total) toward UNICEF's work on behalf of child migrants and refugees.

"What I've learned through this experience is that with even a little creativity — by thinking outside the box, or just asking! — you can help these children. We can all empower ourselves to empower others," Kantor says.

As the refugee crisis around the world intensifies, hate crimes against refugees have risen in Europe and the U.S., sometimes prompted by intolerant rhetoric from political leaders. In these times, Adam Kantor's call to action is more important than ever.