Female Genital Mutilation Is an Extreme Form of Violence Against Girls

At least 200 million girls and women are living with the pain and trauma caused by FGM. UNICEF is working to end this cruel practice now.

February 6 marks the International Day of Zero Tolerance for Female Genital Mutilation (FGM), a violent practice that irreparably damages the bodies of girls and inflicts lifelong emotional trauma. At least 200 million girls and women are living with the scars of mutilation. In 2020 alone, 4.1 million girls around the world are at risk of undergoing FGM.

According to the World Health Organization, female genital mutilation refers to all procedures involving partial or total removal of the female external genitalia or other injury to the female genital organs for non-medical purposes. Unlike male circumcision, FGM has zero health benefits and often leads to longer-term physical complications including severe pain, hemorrhaging, recurrent infections, infertility and even death.

The reasons given for performing this procedure include controlling a woman's sexuality, initiation into womanhood, and perceived enhancement of beauty and cleanliness. In reality, this ancient practice is a cruel and painful form of gender-based violence that permanently damages the bodies of young girls and violates their human rights.

Despite the fact that FGM is never medically necessary, more than 80 percent of FGM is now performed by medical professionals, including doctors and nurses. In early February, a doctor was arrested in Egypt after a 12-year-old girl bled to death after he performed FGM on her without anesthesia. About 87 percent of women between the ages of 15 and 49 in Egypt have undergone FGM, and approximately 14 percent of girls under 14. 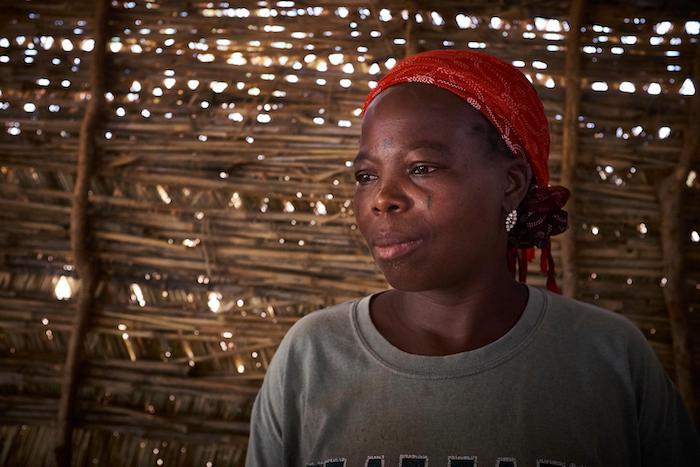 In the village of Tiboanti in Niger's Tillaberi region, Adjima Gondja, 37, recalls how she was subjected to female genital mutilation with no warning before her wedding at age 18. "Nobody can give a reason for undertaking this practice," she says. "I am sad today that it goes on still. I fight to stop it." © UNICEF/UNI201356/Phelps

While FGM is most prevalent in the Middle East and Africa, it exists all over the world

FGM is primarily concentrated in 30 countries in Africa and the Middle East, but it also takes place in some Asian and Latin American countries and in certain communities in Western Europe, North America, Australia and New Zealand. Over 90 percent of women and girls are subjected to the procedure in Djibouti, Guinea and Somalia. While some communities cite religious reasons for continuing to perform this ritualized violence against girls, Islam and Christianity do not endorse the practice.

Laws against FGM have been passed in 26 countries in Africa and the Middle East, as well as in 33 other countries with populations from FGM-practicing countries, but girls are often transported over state or international borders to circumvent such regulations. "Cross-border FGM" has been an emerging trend in recent years. Buruale, 13, from Erubti Woredo in Ethiopia's Afar Regional State, visits households in her neighborhood to teach her community about the traumatic side effects of female genital mutilation. ©UNICEF Ethiopia/2017/Meklit Mersha

Female genital mutilation happens in the United States too — currently, 15 states have no law against it

These legal gaps exist even in countries where FGM is not prevalent. In 1996, the U.S. Congress passed a law banning FGM for girls under age 18. The law was updated in 2013 to make it illegal to knowingly transport a girl out of the U.S. to have FGM performed in another country.

But in November 2018, at the trial of a doctor accused of performing FGM on nine young girls at a Michigan clinic, United States District Court Judge Bernard Friedman ruled that the federal statute outlawing FGM was unconstitutional. The issue, he said, should be left to the states to decide. 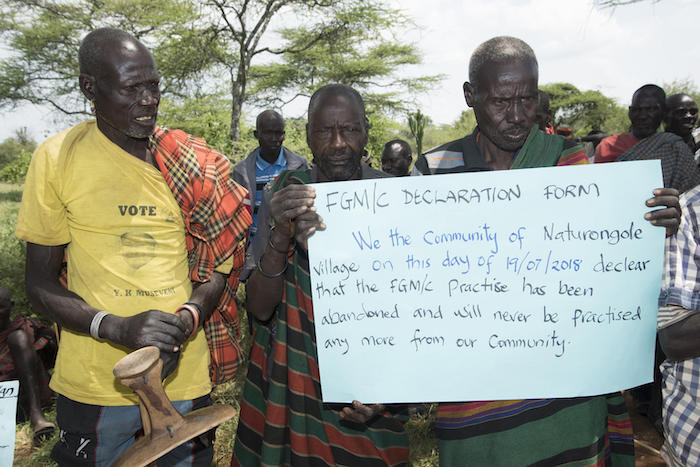 After a UNICEF-supported training in 2018, residents of Naturongole, in Uganda's Moroto district, announced that female genital mutilation would no longer be permitted in their village. © UNICEF/UN0312362/Bongyereirwe

UNICEF and the United Nations Population Fund (UNFPA) jointly run the largest global program to end FGM. The program works with governments and community leaders to establish laws and policies that prohibit FGM and provides support for outreach programs that challenge the social norms that perpetuate this practice. In addition to education and prevention programs, UNICEF and UNFPA also provide counseling and medical treatment for women and girls who have endured the procedure.

Since the UNICEF/UNFPA joint program was established in 2008, 13 countries have passed national legislation banning FGM. Girls in countries served by the joint program are one-third less likely to undergo FGM than they were in 1997. The average cost of preventing one case of FGM is $95.

As part of the Sustainable Development Goals, the global community has set a target to eliminate FGM by the year 2030. While substantial progress has been made, it is an aggressive goal that requires concerted and accelerated action. By 2030, more than a third of all births worldwide will be in 30 of the countries where FGM is most widely practiced, putting tens of millions of girls at risk.

Your generous donation will help UNICEF eliminate FGM and protect the rights and futures of girls around the world.

Top photo: At Kalas Girls Primary School in Uganda's Amudat district in 2018, a student breaks down as she describes running away from home to avoid being subjected to female genital mutilation. © UNICEF/UN0312344/Bongyereirwe