Even as the threat of the novel coronavirus looms, Syrians near and far will spend Ramadan fasting, praying and hoping for better times ahead.

The holy month of Ramadan is traditionally a time for fasting, introspection and getting together with family and friends. But for hundreds of thousands of Syrian families displaced by violence, Ramadan is bittersweet. After nine long years of civil war, many families are scattered. Unemployment, poverty and soaring prices make it difficult to buy food for Suhoor and Iftar meals.

As the world’s focus turns to #COVID19 it is critical that #children’s access to services they need is not affected. In Mahmoudli camp, Ar-Raqqa, @UNICEF’s nutrition teams continue monitoring children’s nutritional status & provide them with therapeutic nutrition supplies. pic.twitter.com/aiL0rL83cO

This year, the world's estimated 1.6 billion Muslims face a new challenge. The threat of COVID-19 will prevent larger families and groups from gathering, as governments urge people to physically distance themselves from one another to prevent transmission.

Schools and marketplaces are shut, and evening prayers and gatherings at mosques have been suspended until further notice. The Ummayad Mosque in Damascus closed for the first recorded time in over a thousand years.

Staying six feet apart from others is virtually impossible for families crowded into refugee camps, like the nearly 120,000 displaced Syrians living in Za'atari and Azraq refugee camps in Jordan. On lockdown since March 21, with limited access to handwashing facilities, the camps are acutely vulnerable to COVID-19.

To help families protect themselves during the pandemic, UNICEF is ramping up its public health information campaigns and water, sanitation and hygiene programs, installing handwashing stations and providing critical medical and personal protective equipment (masks, gowns, goggles and gloves) to frontline health workers. Stopping the spread of disease in humanitarian settings is UNICEF's specialty, a top priority in every UNICEF emergency response. Supporters' donations can go a long way toward helping Syrian children whose lives are already hard enough, survive this crisis. 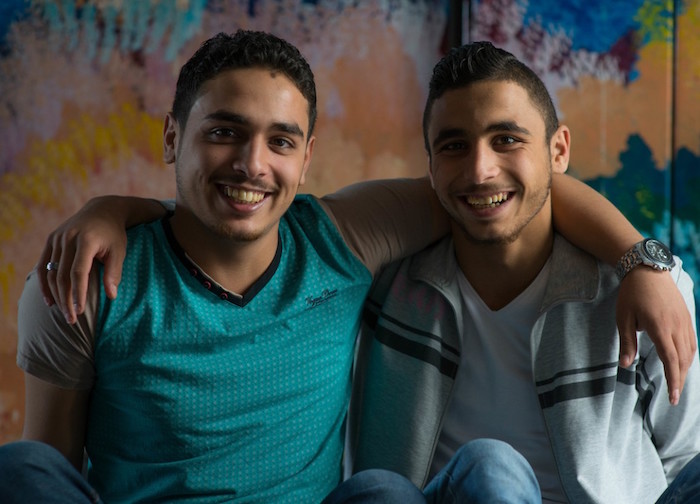 Syrian refugees Watheg, 21 (left), and his brother Harm, 18, live in Mafraq, Jordan. They are looking forward to the day when they can return home to help rebuild their country.© UNICEF/UN043094/Rich

Even before the appearance of the novel coronavirus, a trip to the mosque to pray could be a life-or-death experience in Syria. Brothers Watheg, 21, and Harm, 18 (pictured above) will never forget the day during Ramadan in 2011, when Watheg was shot near their mosque in Homs, Syria.

They had just finished praying and were on their way out of the mosque when fighting broke out in the streets. Four bullets lodged in Watheg's leg. Dozens of others from his neighborhood were killed or injured that evening.

Once there is peace in Syria, I want to return home and help rebuild.

Today, all that is left of their boyhood home is a wall and a pile of rubble. Watheg carries photos of the ruins on his cellphone. The brothers, who live in Jordan now, look forward to a time when there is no violence in their home, their school or their community. "Once there is peace in Syria," said Watheg, "I want to return home and help rebuild." 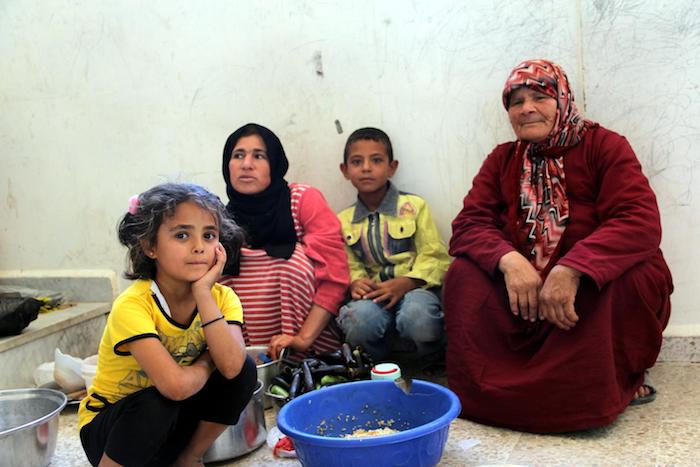 A family gathers during preparation of an evening meal during Ramadan at a shelter for displaced people in the rural town of Hassayia, near Homs, Syria. © UNICEF/UNI148495/Hassoun

In 2016, UNICEF Communication Officer Basma Ourafli wrote this about the precariousness of life in wartorn Aleppo: "Most of the time, we don't know what tomorrow will bring, whether we will make it or not. I recall during Ramadan last year, as we were ready to break our fast, intense shelling started. It was dark, and we were bewildered — not knowing whether to flee or not. The only question running through my mind was: Will we survive the day?"

The only question running through my mind was: Will we survive the day?

Even though they may be far from home, struggling to survive a protracted civil war and now a global pandemic, Syrians will spend their holy month praying, fasting, reading the Quran and preparing for the day when they can all meet again, to rebuild their communities and their nation.

Through it all, UNICEF will be there to help, working with partners to provide children with the supplies and services they need to grow up safe and healthy.

Your generous gift will help UNICEF be there for vulnerable children during Ramadan.

Top photo: Syrian children watch a member of the Syrian Civil Defense, known as the White Helmets, disinfecting a former school building currently inhabited by displaced families in the town of Binnish in northwestern Idlib Governorate, Syria, on March 26, 2020, part of the efforts to prevent the spread of the coronavirus epidemic. © UNICEF/UNI316131/Haj Kadour/AFP