Desperate Times for Children and Families in Syria

Over 875,000 Syrians, mostly women and children, have been forced to flee northwest Syria since December. The scale and speed of this most recent displacement — in the middle of winter — has massively increased humanitarian needs in the country.

Escalating violence and harsh winter conditions in northwest Syria have compounded an already dire humanitarian crisis in the country. Over 875,000 Syrians — 80 percent of them women and children — were forced to flee the northwest area between Dec. 1, 2019 and Feb. 17, 2020. That's 6,500 kids uprooted every day.

The displaced are cramming into cars or piling into trucks with whatever few possessions can fit. There is little or no food. Families are sheltering under tents or taking refuge in schools, mosques, abandoned buildings and shops. Many are living out in the open, enduring heavy rain and biting cold, burning whatever they can find, including furniture, to try to stay warm.

The last two operational hospitals in western Aleppo have been hit. One of them was a maternity and children’s hospital.

Access to basic services such as health care, safe water and sanitation is either very limited or non-existent. Several children are reported to have died from exposure to freezing temperatures. 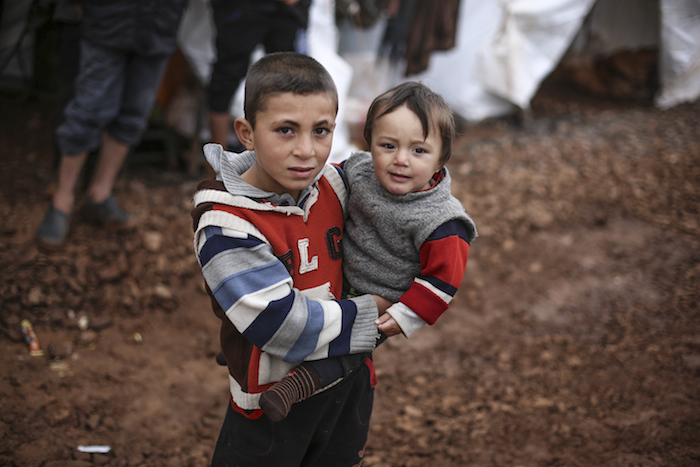 After a decade of violence and destruction, living conditions across Syria have become unbearable. The economy has collapsed, and a sharp devaluation of the Syrian Pound has led to skyrocketing prices for basic goods and services. Families have been displaced multiple times over the years. Every child under the age of nine has known nothing but war.

"Such abject disregard for the safety and wellbeing of children and families ... must not go on." — Henrietta Fore, UNICEF Executive Director

The scale and speed of the most recent displacement has massively increased humanitarian needs in the country. Working with partners on the ground, UNICEF is providing lifesaving assistance, including safe drinking water, warm winter clothing and hygiene kits, screening and treatment for malnutrition, and education and protection services.

A campaign to immunize children against measles and other vaccine-preventable diseases is also under way, focusing on children who may have previously missed out on vaccinations. In the northwest, UNICEF is currently the sole provider of vaccines as well as the cold-chain storage and other equipment needed to keep vaccines safe and effective.

Continued support for Syrian relief efforts is critical as other dangers mount.

Malnutrition among children and pregnant and lactating mothers has increased. Deteriorating conditions are also putting women and children at greater risk of gender-based violence — particularly in informal settlements where makeshift sanitation facilities do not allow women and girls privacy. Noor, 11, of Atarib, northwest Syria, said her family had to leave their village after fighting overtook the streets. There was shelling and some of her neighbors died. Since the beginning of the year, 77 children were verified killed and injured due to the escalation of violence in the northwest part of the country. Over 875,000 have fled — mostly women and children. © UNICEF/UNI296647/Abdullah

Displaced children are also at greater risk of exploitation and abuse, including being forcibly recruited and used by armed groups. Other hazards include the risk of being injured or killed by landmines, improvised explosive devices (IEDs) or other unexploded ordnance (UXO).

“The carnage in northwest Syria continues to exact a horrific toll on children,” UNICEF Executive Director Henrietta Fore said. “It is time for the guns to go silent and for the violence to stop once and for all. Parties to the conflict must protect children and the infrastructure on which they depend, give families respite and allow humanitarian workers to respond to the massive needs, in accordance with international humanitarian law."

Help UNICEF step up its emergency response, delivering assistance to those who need it the most. Additional funding is urgently needed to save people’s lives and alleviate their suffering. Every contribution counts.

Top photo: Children ride on the back of a truck heading out of south rural Idlib, northwest Syria, where escalating conflict has forced 875,000 Syrians to flee since Dec. 1, 2019. © UNICEF/UNI286347/Abdoullah