Six months since the escalation of war in Ukraine, UNICEF continues to call for an end to the violence while urging continued support for emergency response and recovery efforts.

As the Ukraine war reached the six-month mark, UNICEF reported some startling statistics:

Nearly 1,000 children in Ukraine have been killed or injured.

Two of every three Ukrainian girls and boys have had to flee their homes.

There are 5.2 million Ukrainian children who remain in need of humanitarian aid.

An animation based on actual drawings by 11-year-old Maxym and other Ukrainian children living through the horrors of the Ukraine war. © UNICEF 2022 Video edited by Tong Su for UNICEF USA

The majority of civilian casualties recorded by the UN since Feb. 24 — including the killing and maiming of children — were caused by the use of explosive weapons in populated areas, including the use of airstrikes, missiles or heavy artillery.

The impacts of the use of explosive weapons are particularly devastating for children. Child survivors often endure staggering physical injury. Some lose their sight, hearing or limbs. And then there is the psychological distress. Almost all will need critical and sustained psychosocial support.

There has been indirect harm to children from the ongoing conflict as well, as explosive weapons damage or destroy critical infrastructure, cutting children off from essential services. Children who have fled across borders risk getting separated from their families and becoming targets of trafficking and other forms of exploitation and abuse.

''Beyond the horror of children being killed or physically hurt in attacks, almost every child in Ukraine has been exposed to deeply distressing events, and those fleeing violence are at significant risk," UNICEF Executive Director Catherine Russell said. “The start of the school year in just over a week’s time is a stark reminder of how much children in Ukraine have lost."

UNICEF has been on the ground in Ukraine since 1997, and has had emergency teams in place since conflict broke out in Ukraine's eastern region in 2014, supporting affected children and families — and so was well positioned to quickly ramp up its humanitarian operation when the war abruptly escalated on Feb. 24.

With support from the international community and from donors, and with help from partners, UNICEF has managed to reach millions of people in war-affected areas with lifesaving aid over the last six months, including:

To support children and women fleeing across borders, UNICEF and UNHCR, in cooperation with local authorities and other partners, have activated 33 Blue Dots, one-stop service hubs located along major transit routes. Inside refugee-hosting countries, UNICEF supports national, municipal and local systems that deliver essential services and protection, particularly for the most vulnerable children. In Poland, for example, partnerships with local municipalities have enabled UNICEF to reach more than 700,000 refugee children and women with essential services.

Critical to recovery for children in conflict: a safe place to play, and to keep learning

UNICEF's expertise in early childhood development informs the emergency interventions aimed at blunting the psychological trauma of war on children who have had their lives upended, and in many cases, witnessed death and destruction firsthand.

Enabling children to get back into a routine of playing, learning and interacting with other children — to establish a sense of normalcy in the midst of all the fear, chaos and uncertainty — is critical for supporting their mental health and psychosocial needs and mitigating the risks of long-term harm.

This is where the safe spaces come in — the mother-and-child respite rooms at the UNICEF-UNHCR Blue Dots, the kindergartens and day care centers in refugee-hosting communities in neighboring countries and similar environments that UNICEF helps make possible.

UNICEF and partners are also working to provide opportunities for children who remain inside Ukraine and Ukrainian refugee children to continue their education, in classrooms or online. Hundreds of thousands of students have been reached through these efforts. 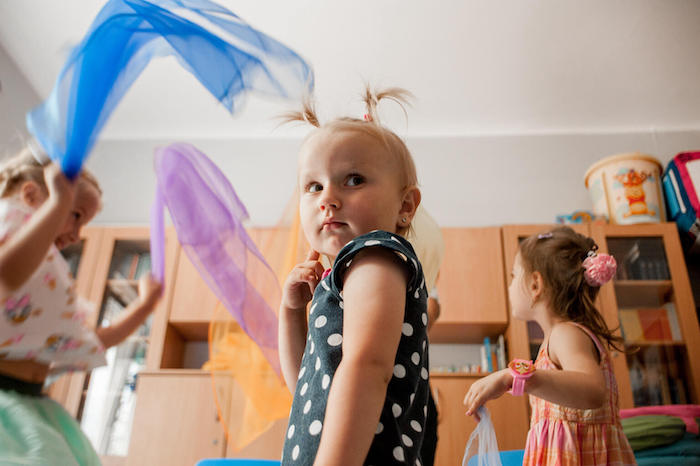 Lilia, 3, joins other refugee children from Ukraine for playtime at a UNICEF-supported Early Childhood Development center in Rzeszow, Poland. © UNICEF/UN0684309/Moskalenko

UNICEF: committed to stay and delier for the children of Ukraine

As the people of Ukraine and the international community marked six months of the escalation of the war, UNICEF called on UN Member States and humanitarian partners to "use every available means" to protect children from harm and to redouble efforts to secure an end to the war.

Reporting from an injured child's hospital bedside in Lviv on Aug. 22, UNICEF Spokesperson James Elder had this to say:

"As winter approaches and hostilities continue, there is need, and suffering just doesn’t show any sign of diminishing. UNICEF is committed to stay and deliver for the children of this country. But we do need your support."

From a UNICEF-supported hospital in Lviv, UNICEF Spokesperson James Elder speaks with Anna, whose 10-year-old son Artem was severely injured when a cluster bomb exploded in the street outside their home. After six weeks in the ICU, Artem continues to recover from his injuries. © UNICEF 2022. Video edited by Tong Su for UNICEF USA.

Help UNICEF continue to meet the needs of children and families impacted by the war in Ukraine. Donate today.

Top photo: Olesia of Kyiv kisses her teenage son, Matvii, who lives with a disability. The two spent the first days of the Ukraine war hiding in a basement. Nearly 1,000 children have been killed or injured in the six months since war escalated in Ukraine, and children continue to be traumatized by the violence and destruction happening around them. © UNICEF/UN0668145/The Village media