After an Earthquake, a Mother's Nightmare in Haiti | UNICEF USA

After an Earthquake, a Mother's Nightmare in Haiti

The door to Mélienne Dessir's house barely closes. The entire back section of the building fell into the sea the day the earthquake hit Pestel, in southwestern Haiti.

That morning, August 14, 2021, the 24-year-old mother of three got up early to buy groceries at the market. Twenty minutes after she left home, time suddenly stopped. The ground cracked beneath the market stalls. The foundations of the police station, the health center and the town school crumbled. Houses close to the sea were battered by crashing waves.

Horrified neighbors tried to save their lives by abandoning their homes and rushing in the direction of the highway. An old ghost was once again wreaking havoc in Haiti. Another earthquake. Another nightmare. 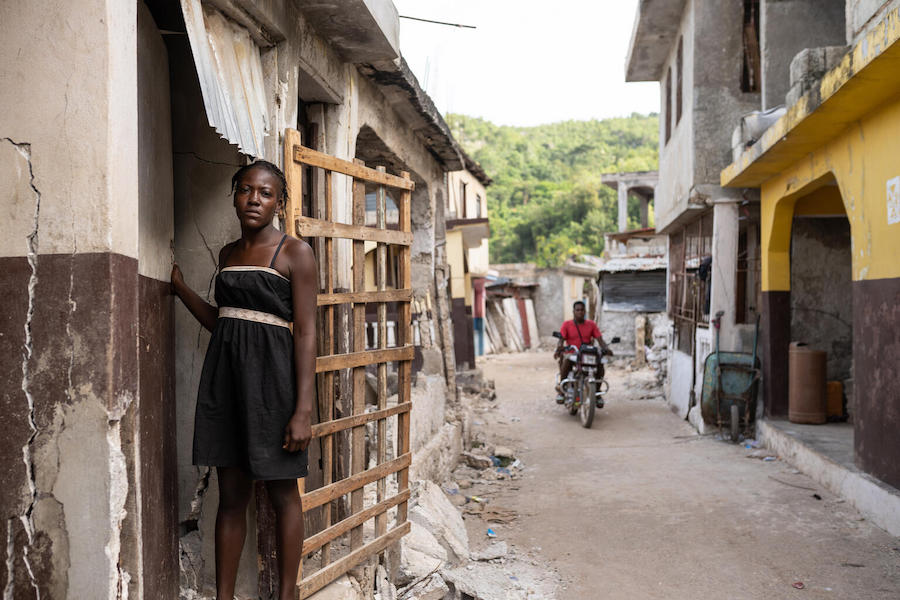 Eighteen-month-old Celine was playing with her brother, Richardson, 5, and sister, Cynthia, 8, when the wall of their house collapsed on top of her. Her heart stopped beating instantly. Dessir ran as fast as she could back to her house, fear gripping her heart. "When I got home..." She holds her breath and clenches her teeth to hold back the tears. "When I got home, our neighbor handed me Celine's body. I fainted when I realized I was not dreaming ... that I had lost her." 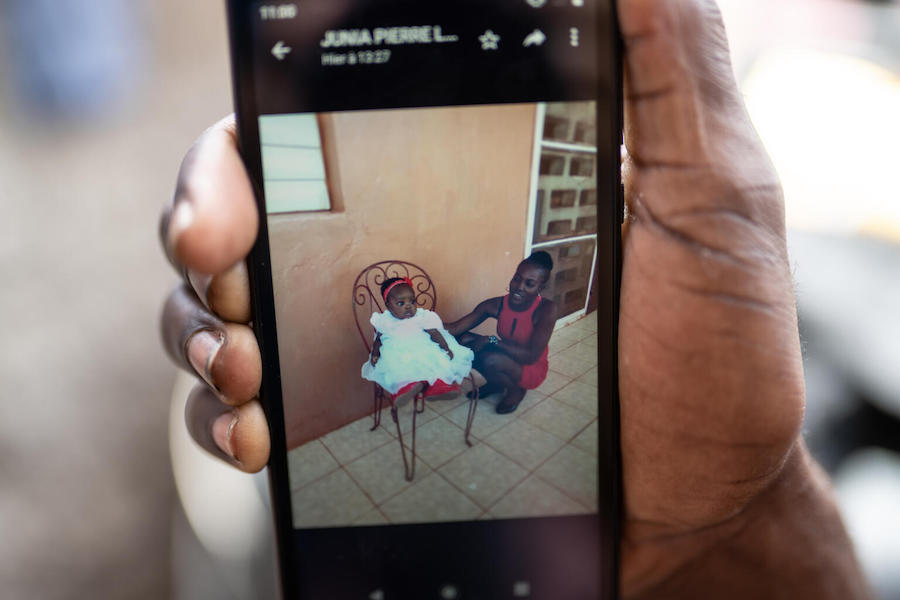 Nobody lives on the main street in Pestel anymore, a beautiful fishing village on the shore of the Caribbean Sea, where in the afternoons football was played in the square, fish was sold in the port and the sunset was reflected in the green mountains. Now, Pestel's streets are empty. Only broken houses, personal belongings and rubble remain on each corner. At least 2,200 people lost their lives in the magnitude 7.2 quake. More than 12,000 were injured. An estimated 1.2 million people — including 540,000 children — have been affected, and more than 50,000 houses destroyed. 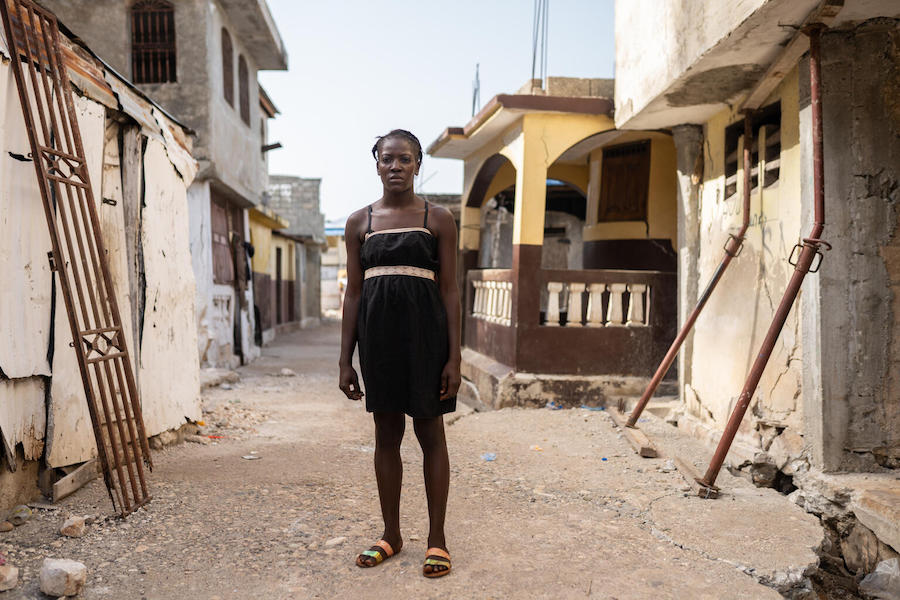 The loss of her daughter and her home left Dessir in a deep state of shock, as if nothing and no one could take away a pain that only a mother would understand. She is a fortress in courage, hiding her tears from public view, but she cannot camouflage the wound she carries inside. 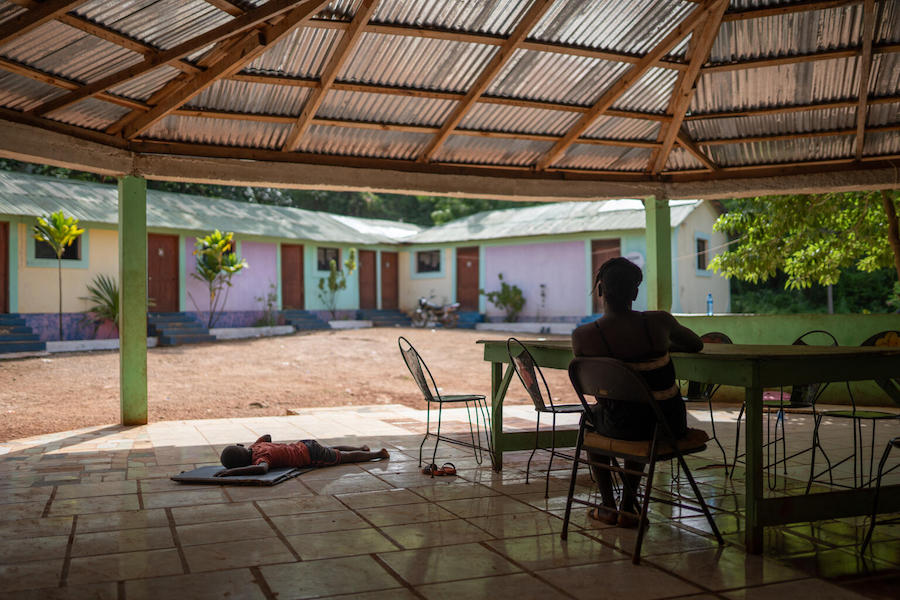 On the day of the earthquake, 8-year-old Cynthia was also injured. With barely time to absorb the death of her baby, Dessir rushed to the nearest medical center in search of care. But there was no center, only a pile of rubble. In the days that followed, mobile clinics were built next to the nearby hotel, where several families now sleep on the floor, including Dessir and her son. 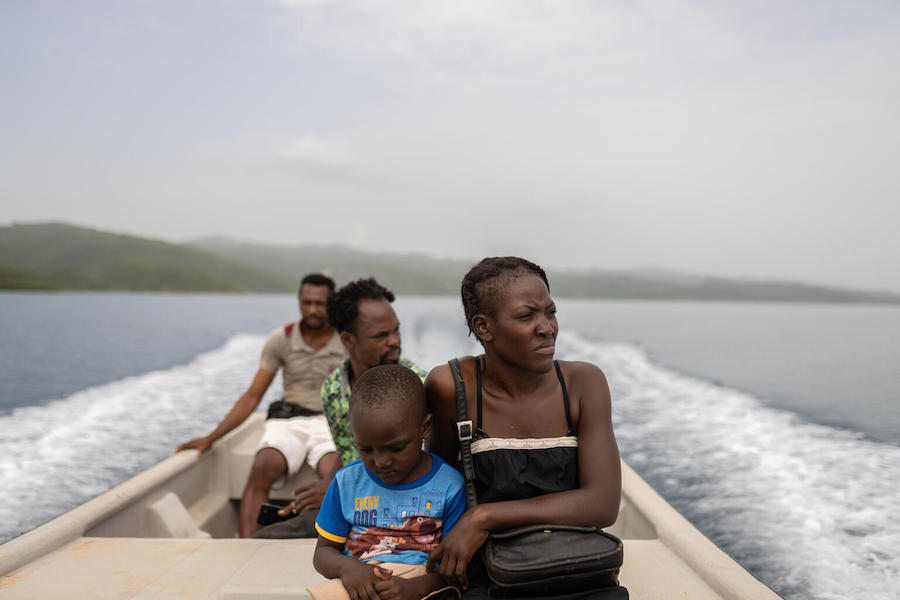 These days, Dessir must find the strength to take the boat that brings her closer to her surviving daughter, Cynthia. The little girl is recovering from her injuries at the house of a friend of her father's in Zétroit, a village 20 minutes from Pestel on the other side of the bay. 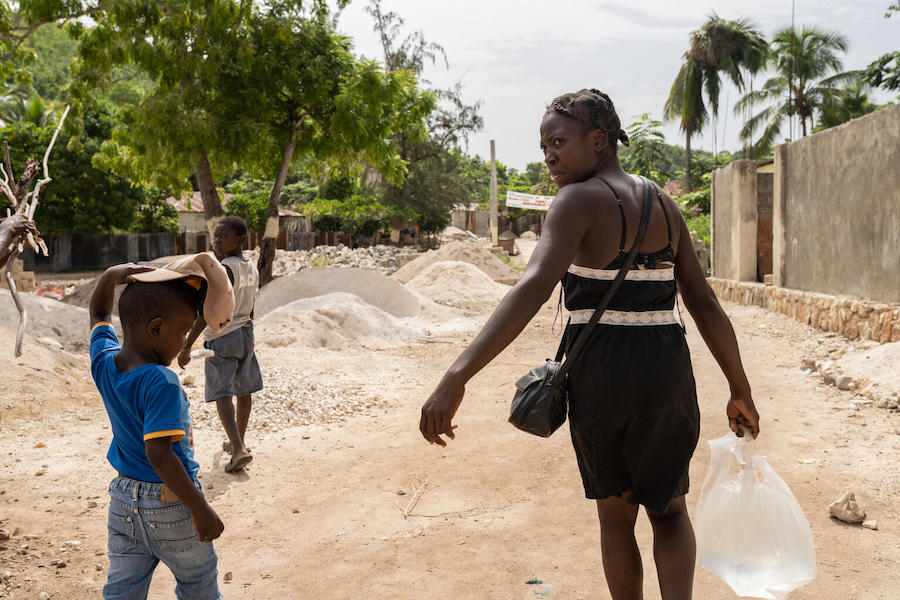 "It was not an easy decision but a few days after the earthquake, my husband and I decided that it was best for Cynthia to recover in a quiet place. With aftershocks in the days after, and without a roof to sleep beneath, she couldn't stay with me," said Dessir. "It's hard not being able to see her often." On each trip across the bay, she brings water and food, because there is no safe drinking water in the villlage. 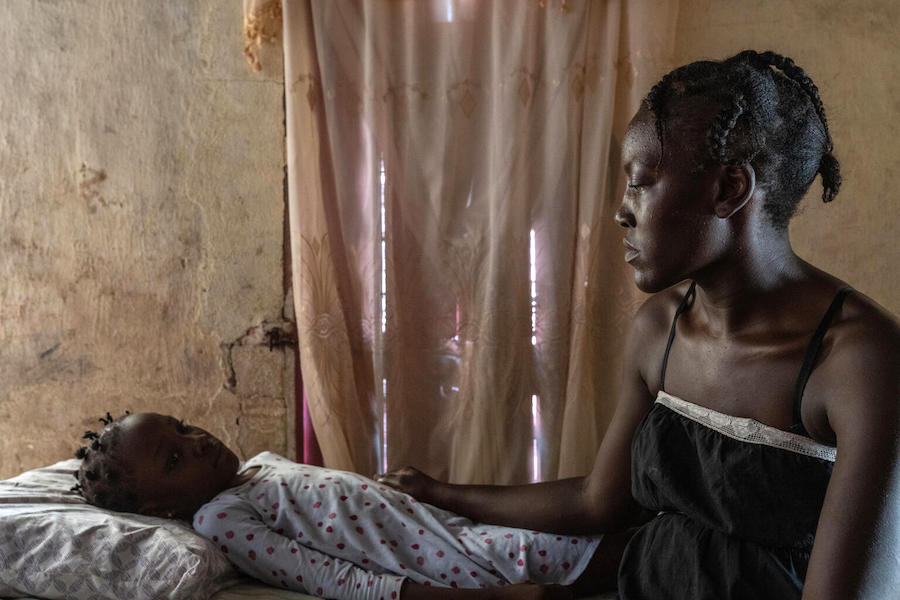 "It saddens me to think that I will never see my little sister again," says Cynthia. "Everything happened so fast." Her life turned upside-down the day she lost her baby sister and injured her back and shoulders. She is slowly recovering without professional care because there is no health center near Zétroit. Her mother's visit draws a shy smile, but signs of her pain are visible. 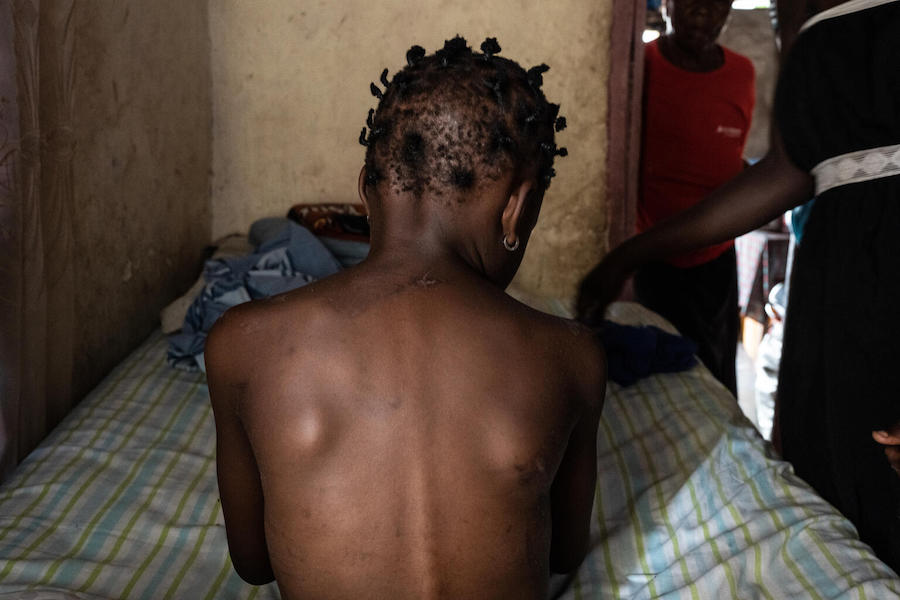 The scars on Cynthia's back will be a permanent reminder of the scenes that no child should witness. "Chlldren affected by the earthquake are highly exposed to posts-traumatic stress disorder that can affect their cognitive and social outcomes," says Jean Stenio, chief of the UNICEF field office in Les Cayes. This can be translated into depression, sadness, decreased activity, poorer school performance and rumination about the disastrous event. Their mental health is a priority for us."

To help affected families and victims, UNICEF is on the ground providing emergency aid including psychosocial support and access to safe water and hygiene kits, and working with authorities to rebuild schools and get students back to learning, despite the logistical and security challenges in the country.

"I hope that we can be reunited soon," says Dessir's husband, Pascal. "I miss them when they leave. These are not easy days, I assure you." He was the one who brought his daughter to the village days after receiving first aid at the mobile clinic. Before the earthquake, Pascal worked as a laborer between Pestel and Zétroit. He tries to keep up morale, fighting to move forward with his family. 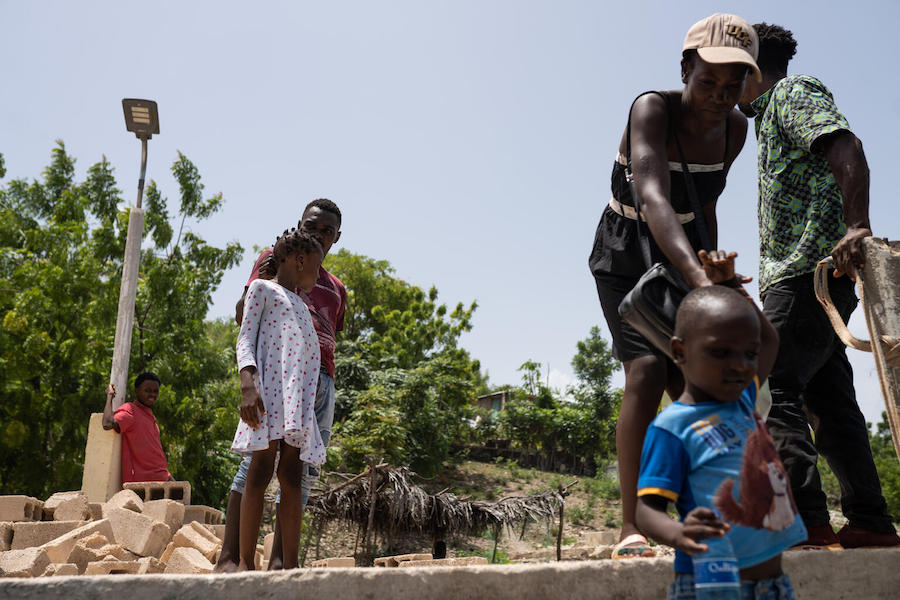 Despite her injuries, Cynthia cannot resist getting out of bed to accompany her mother and brother to the port. She watches them leave by boat, without knowing when she will see them again. After the earthquake, many families face the challenge of being separated from their loved ones, without means of communication or transportation. 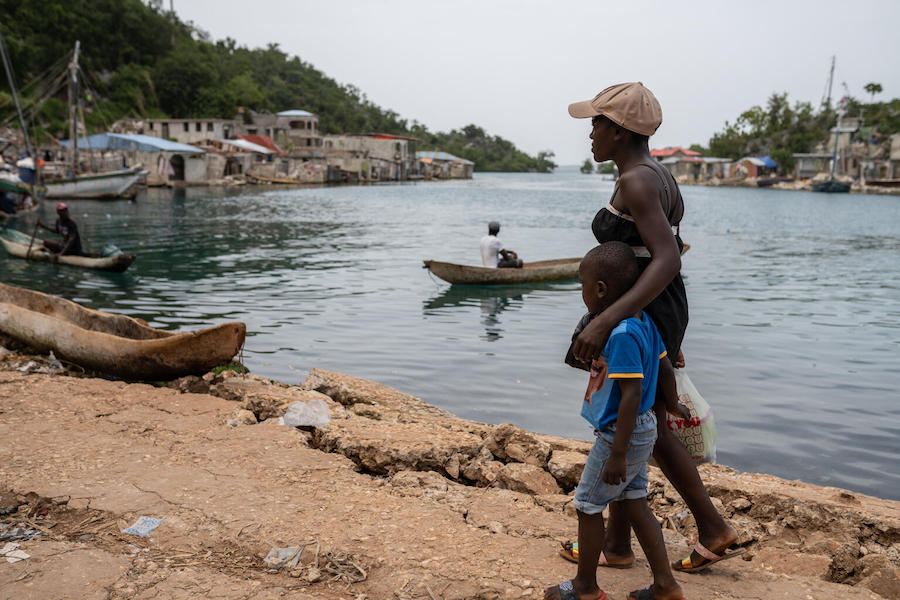 Back in Pestel, everything remains the same: the earthquake-cracked soil, the fishing boats moored in shallow waters. Dessir doesn't talk much on the way to the cemetery, holding her son close. 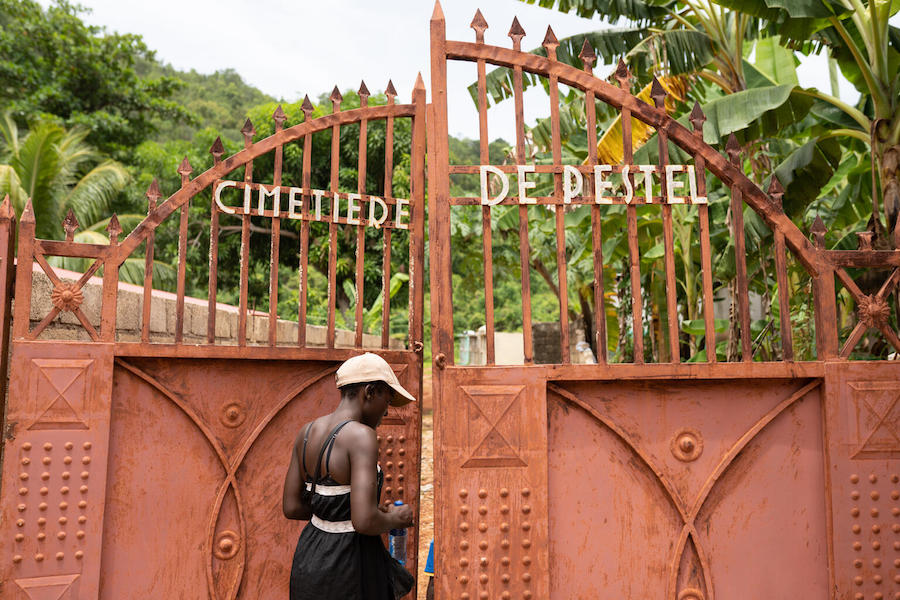 "We buried her the same day of the earthquake. After the funeral, the reality of what had happened began to set in. We did not have the time or money to build a tomb. We buried her beneath the earth. Here my little girl sleeps forever," says Dessir. 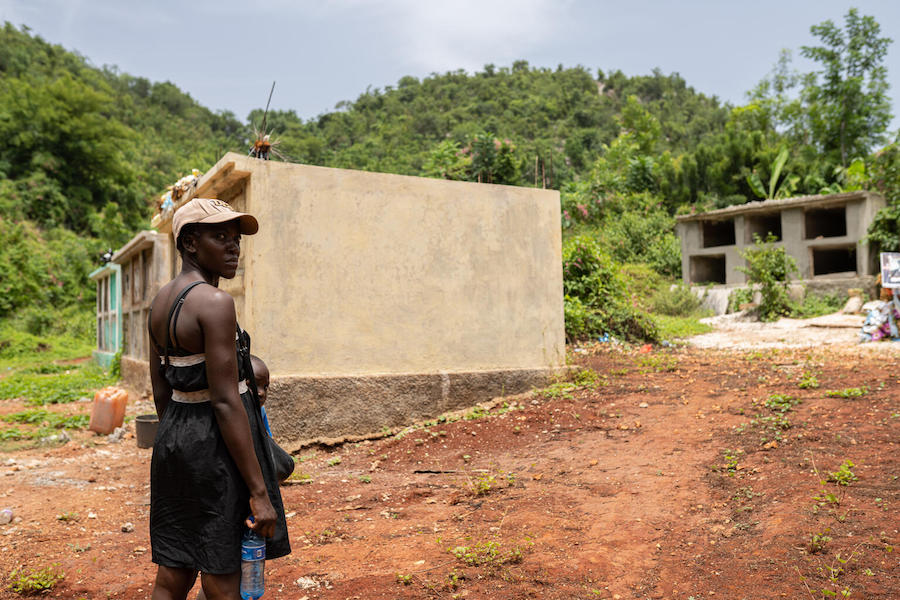 Richardson watches the scene without really understanding what they are doing there. Celine is buried under a small mound in the cemetery in Pestel. She is not the only one with the same date of death. "I asked God, Why me? Why is it always us? Why my daughter?" says Dessir. "But despite everything, I will find the strength to continue. Because I have two wonderful children who need me to be strong. And that gives me courage."

UNICEF is working with partners to provide basic services for children and families affected by the earthquake in Haiti. You can help.

Top photo: The streets of Pestel, in southwestern Haiti, are empty after the August 14, 2021 earthquake damaged and destroyed buildings, killing at least 2,200 people, injuring more than 12,000 and disrupting the lives of 1.2 million people, including 540,000 children. UNICEF is working with partners to provide families with basic services and help children recover from the trauma and resume their lives. © UNICEF/UN0527138/Haro. All photos by Juan Haro for UNICEF