Activist Vanessa Nakate: On the Front Lines of the Climate Crisis

Activist Vanessa Nakate is telling the stories of children suffering the worst impacts of the climate crisis to those who have the power to bring real change.

UNCEF's newest Goodwill Ambassador, 25-year-old Ugandan activist Vanessa Nakate, has been calling for urgent action to mitigate climate change since 2019, when she organized a protest with her siblings and cousins on the streets of Kampala. Inspired by Greta Thunberg, Nakate continued to protest weekly, becoming a well-known face in the movement of young people striking for climate action around the world.

In 2020, it was Nakate's absence that made headlines, when she was cropped out of a widely circulated photo in which she appeared alongside Thunberg and other white climate activists at the World Economic Forum in Davos, Switzerland. Nakate responded to the incident, saying the news outlet that distributed the image "didn't just erase a photo. You erased a continent." UNICEF Goodwill Ambassador Vanessa Nakate stands beside a dead tree along a dry riverbed in Sopel, Turkana County, Kenya, on Sept. 9, 2022. No rain has fallen in Sopel in two years. The worst climate-induced drought in 40 years has led to a water and food crisis marked by crop failure, the death of livestock, mass displacement and a drastic hike in the number of children suffering from severe acute malnutrition. © UNICEF/UN0702757/Translieu/Nyaberi

In her new role with UNICEF, Nakate traveled recently to northwestern Kenya's Turkana County, to see firsthand the devastating impacts of water and food insecurity caused by the Horn of Africa's worst drought in 40 years. She met with communities whose lives have been upended by the climate crisis, including mothers with babies receiving lifesaving treatment for severe acute malnutrition and families benefitting from solar-powered water supply systems.

The interview below originally appeared on NBC Morning News. It has been edited for publication.

What inspired you to take on this role with UNICEF and what are you hoping to accomplish?

VANESSA NAKATE: I started doing my activism in 2019 to create awareness about some of the challenges that people in my country, Uganda, were facing because of the climate crisis. So with this new role as the UNICEF Goodwill Ambassador, I hope to continue speaking and amplifying and using my platform to talk about the stories and the experiences of so many children that are suffering from malnutrition as a result of the climate crisis. 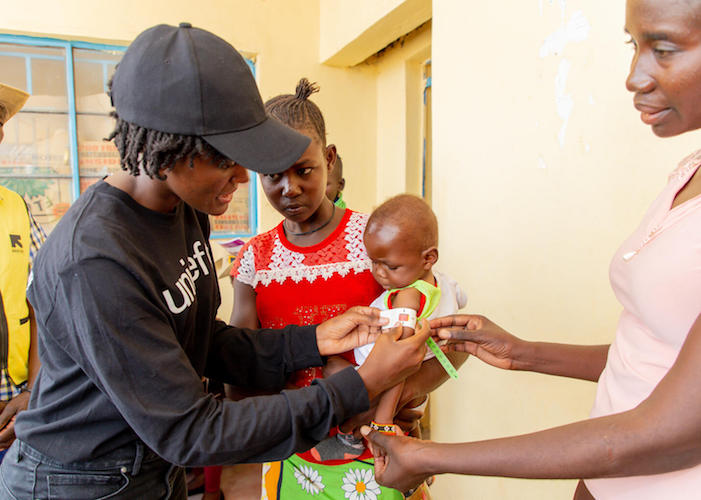 Vanessa Nakate, left, uses a mid-upper arm circumference (MUAC) band to assess a child for malnutrition with the guidance of Ruth Ekwam, right, a nutritionist at the UNICEF-supported Kobuin Health Center in Turkana County, Kenya. © UNICEF/UN0702691/Translieu/Nyaberi

You once said that it is your first responsibility to bring the voices of children into the climate conversation. Do you feel younger generations and people of color are being heard?

VANESSA NAKATE: For so long, many young people have been speaking about the climate crisis and what needs to be done, and we haven't gotten the much-needed attention, the much-needed response, because the climate crisis continues to happen. People continue to suffer, children continue to die and we are continuing to see the climate disasters in different parts of the world. So it's evident that the action that we need from the governments, we haven't seen that yet.

And of course for young women especially or young people of color, they face much bigger challenges in the fight for climate justice, especially in getting into spaces where climate conversations are taking place. We cannot have climate justice while excluding the voices and experiences of those on the front lines of this crisis.

We cannot have climate justice while excluding the voices and experiences of those on the front lines of this crisis. — UNICEF Goodwill Ambassador Vanessa Nakate 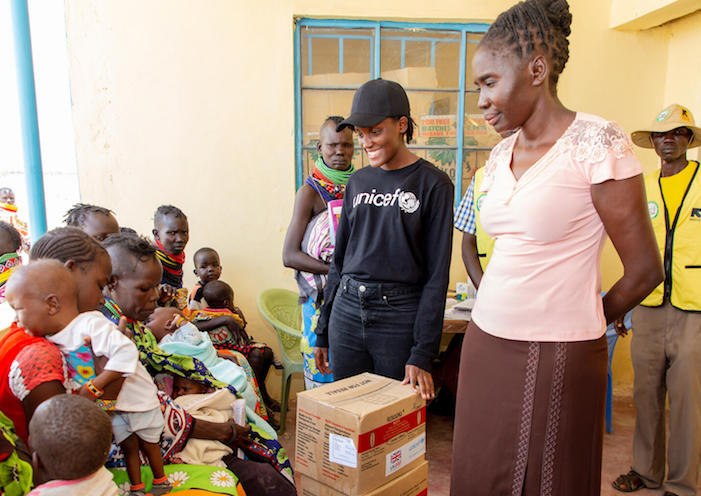 Vanessa Nakate, center. meets mothers at the Kobuin Health Center in Turkana County, Kenya. The children are part of the outpatient treatment program for children with severe acute malnutrition. They are being treated with Ready-to-Use Therapeutic Food (RUTF), a shelf-stable, nutrient-rich nut paste. © UNICEF/UN0702693/Translieu/Nyaberi

What did you learn on your recent trip to Kenya?

VANESSA NAKATE: When I visited Kenya, I visited one of the areas that is being affected by the drought in the Horn of Africa. This is the worst drought in 40 years, and it has left over 20 million people suffering. But what I saw, it is mostly children and women that are experiencing the worst impacts of this drought because they cannot access water, they cannot access food and in the end, children are starving. 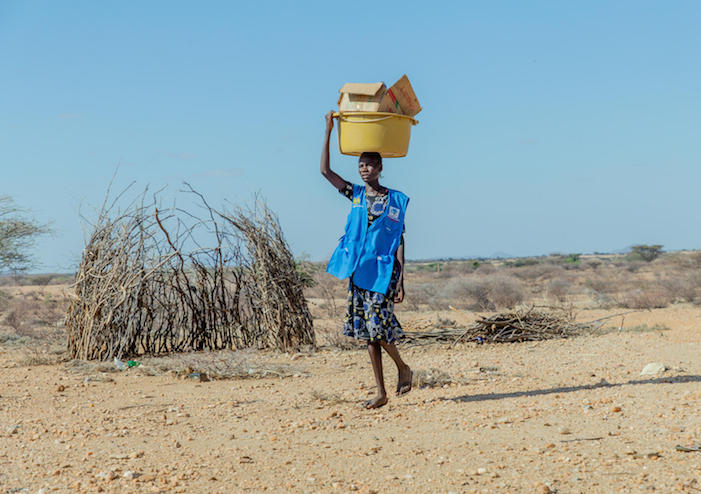 On Sept. 8, 2022 in Nasiger Village, Turkana County, Kenya, Susan, a community health volunteer, moves from house to house screening children for malnutrition and in severe cases referring them to the nearest health facility. Here she’s going to do a follow-up visit at the home of a child who is moderately malnourished and is being treated with Ready-to Use Therapeutic Food (RUTF). © UNICEF/UN0702711/Translieu/Nyaberi

The Children’s Climate Risk Index, released by UNICEF in 2021, found that 1 billion children— nearly half of the world's 2.2 billion children —  live in one of the 33 countries classified as being “extremely high risk" due to climate change impacts. The top ten countries in the risk index are all in Africa.

Across Ethiopia, Kenya and Somalia, almost 2 million children are in urgent need of treatment for severe acute malnutrition. UNICEF's three-year appeal to help families and communities in the region build resilience is currently just 3 percent funded.

Help UNICEF reach more children and families threatened by severe drought in the Horn of the Africa. Please donate today.