5 Ways to Fight Racism and Xenophobia

Coronavirus fears fueled a rise in intolerance and hate crimes. Now is the time to speak out against racism and racially motivated violence.

The Pulitzer Prize-winning restaurant critic Jonathan Gold, best known for extolling the virtues of nomadic taco trucks and under-the-radar noodle shops in his native Los Angeles, once said that he wrote "to try to get people less afraid of their neighbors."

In May 2022, the U.S. Department of Justice published a special report aimed at raising awareness of hate crimes against communities of color during the COVID-19 pandemic. The report showed that hate crimes rose in 2020 to their highest level in 12 years, with a surge of crimes and incidents against Asian American, Native Hawaiian and Pacific Islander communities. Actual numbers are thought to be even higher, as many hate crimes — including verbal harassment and physical assaults — go unreported, due to a host of factors ranging from cultural and language barriers to a lack of trust in law enforcement.

In the early days of the pandemic, Jonathan Mok, a college student from Singapore, reported being punched and kicked on the street in London. His attackers, he told the BBC, shouted, "We don't want your coronavirus in our country." Mok posted photos of his injured face on social media, writing, "Racism is not stupidity — racism is hate. Racists constantly find excuses to expound their hatred — and in this current backdrop of the coronavirus, they've found yet another excuse."

Racism is not stupidity — racism is hate. Racists constantly find excuses to expound their hatred — and in this current backdrop of the coronavirus, they've found yet another excuse.

Black Lives Matter, the global racial justice movement, was nominated for the 2021 Nobel Peace Prize for its struggle against racism and racially motivated violence. "BLM's call for systemic change has spread around the world, forcing other countries to grapple with racism within their own societies," Norwegian MP Petter Eide said in his nominating papers. Meanwhile, migrants and refugees — some literally running for their lives  — continue to be met with suspicion and hostility.

Gold saw food as one way to bridge the divide between people from different ethnic backgrounds. Learning about other cultures emphasizes the fact that we are all people and sends the message that racism and xenophobia will not be tolerated in a civil society. It is our job, as people, as parents, as citizens of the world, to combat racism and xenophobia wherever we can. Here are five ways:

Show your support for diverse ethnic groups in your community by attending, promoting or helping fund events run by local organizations and houses of worship that bring people together: festivals, film series, guest lectures, language classes and celebrations. Bring your children.

Stand up for cultural diversity and inclusion by supporting local businesses run by immigrants. Try foods and recipes from a range of culinary traditions. Watch films from other countries with your kids and read them stories that celebrate diversity.

Stigmatization is cruel and unproductive. There has been a disturbing increase in hate speech among Americans and Europeans in recent years, often blaming immigrant and minority groups for the difficulties of their own countries. If you overhear someone tell a racist joke, speak up and let them know stereotyping isn't harmless. Let your children know they should feel free do the same. There's nothing funny about using "humor" to normalize dangerous ideas and perpetuate ugly stereotypes.

If you see something in the newspaper or on social media that reflects prejudice, write a letter to the editor or leave a comment to let others know that intolerant remarks are unkind and uncalled for. 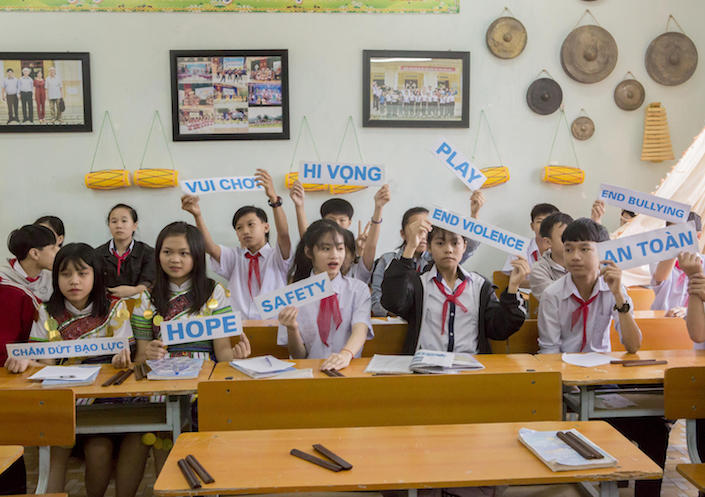 At a World Children's Day celebration in 2018, students at a UNICEF-supported school in Vietnam hold up signs showing some of their hopes for the future — dreams shared by young people everywhere. © UNICEF/UNI218897/Viet Hung

3. Teach children kindness and how to talk about differences

Prejudice and hate are not innate. They are learned behaviors — and they can be unlearned. Children absorb biases from the adults around them, and from the media, books and their peers. So set a good example. The process of countering negatives with positives begins at an early age. Explain that what makes actions harmful is impact, not intent.

Talking about differences does not increase prejudice in children. Make sure children understand all humans are the same inside and each one of us has a right to feel safe and valued. Name-calling is uncivilized and will not be permitted.

When the public stands in solidarity with immigrants and marginalized groups, bullies lose their power. If you see someone being harassed or physically attacked, it is important to help if you can do so safely. Make your presence as a witness known. Make eye contact with the person being attacked and ask if they want support. Don't escalate the situation. Verbal and physical abuse is wrong and should not be tolerated. All people deserve to be treated with dignity and humanity. 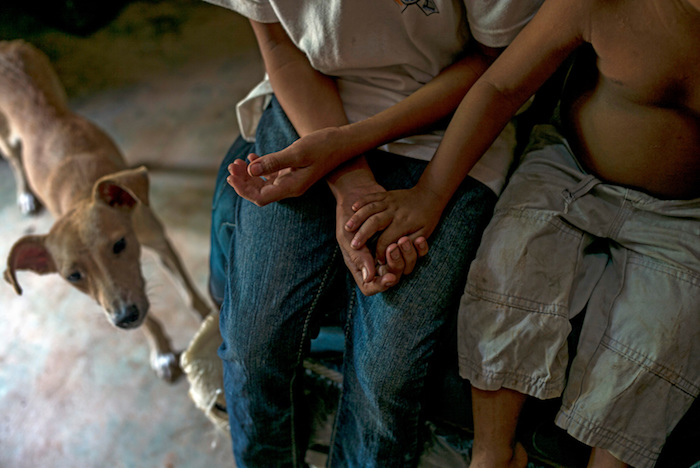 When he was 16, Alexis left his home in Omoa, Honduras to earn money to support his mother and his siblings (above). He fell off a freight train and lost his leg. "He left because of poverty," his mother said. "He told me he was going so he could help me and all the children I have. He wanted to study." © UNICEF/UNI218897/Viet Hung

UNICEF has highlighted and advocated tirelessly for children's rights around the globe for more than 75 years and knows that children need to be seen as children, first and foremost. Human rights are a collective promise made by all countries of the world, including those in distress. Children from all ethnic backgrounds — especially children who have been uprooted by violence, war and poverty — need our support, wherever they are. Every child deserves to be treated with humanity and empathy, and to grow up in a safe and healthy environment.

Please support UNICEF's work to save and protect children around the world.

Top photo: A lonely figure walks the tracks on the outskirts of Reynosa, Mexico, across the Rio Grande from McAllen, Texas. Alone or with family members, thousands of Central American children and teens arrive in Reynosa every year, seeking safety and a better life across the border in the U.S. © UNICEF/UN030740/Zehbrauskas