Help Children on the Move

UNICEF works to keep children safe and to protect their rights, no matter where they are. That work is more essential now than ever, with nearly 50 million children uprooted across the globe.

Among them are 28 million fleeing brutal wars in Syria, Iraq, Yemen and South Sudan. 6.3 million migrant and refugee children in Latin America and the Caribbean who are facing life-threatening situations and multiple forms of violence. 500,000 Rohingya refugee children in Bangladesh now facing uncertain futures after fleeing horrific violence in their home country of Myanmar. That figure also includes children forced by deprivation and extreme poverty to make difficult and dangerous journeys abroad, where upon arrival many wait, out of school, for their fates to be decided.

This child refugee crisis is the worst since World War II. Whether those impacted are called migrants, refugees or internally displaced, they are all children first.

UNICEF USA is now leveraging its global expertise on behalf of children on the move in the U.S. and around the world. You can join UNICEF and take meaningful action to keep vulnerable children on the move safe at every step. These children had no choice where they were born. And they urgently need — and deserve — our help now.

Separating children from families trying to enter the U.S. is devastating for them and can cause irreversible harm. Stand up for children who can't advocate for themselves by joining UNICEF USA's call for an end to this cruel policy.
Send an Email Now 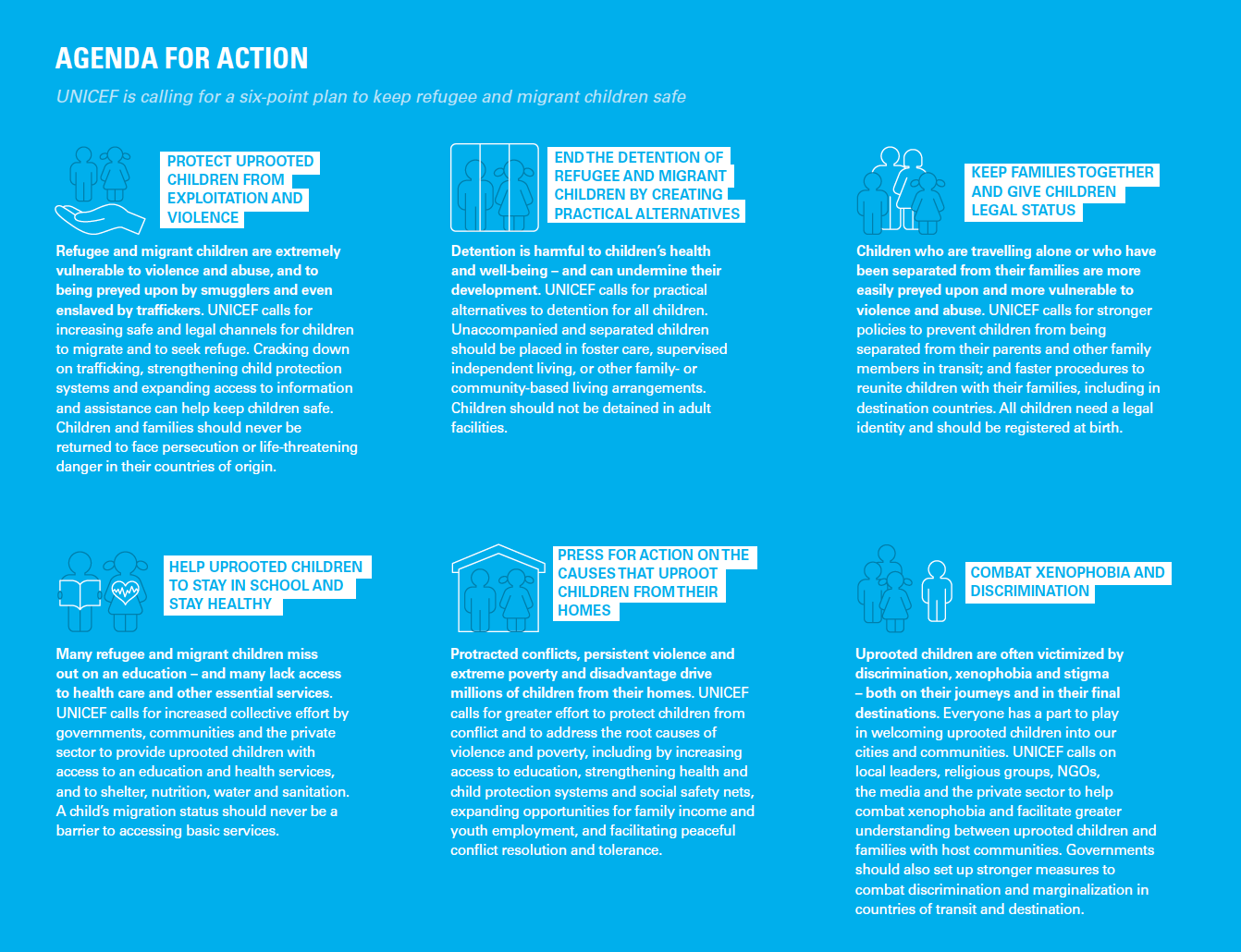 Over 1 billion people worldwide currently live in inadequate housing and in 2018, 70.8 million children, men and women were displaced due to conflict, violence, natural disasters and poverty.

On December 7, you can show your support by grabbing a sleeping bag and spending a night in the great outdoors for the World’s Big Sleep Out. Events are happening in cities across the U.S. including Time Square, New York and around the world with 50,000 people expected to join in. Let's raise awareness and funds to fight this growing global problem!

Read more about the Migrant Crisis

UNICEF Has a Plan to Keep Refugee and Migrant Families Together
UNICEF is working to keep vulnerable children learning, healthy and safe.

How UNICEF Works to Save Refugee and Migrant Children from Detention
1 million is the estimate for how many children are detained for immigration reasons. UNICEF wants to free them.