Why Vaccines Matter in 2019

Misinformation and distrust are fueling vaccine hesitancy, and vaccine-preventable diseases like measles are on the rise as a result.

Most people would assume that trust in vaccines is a given. Vaccines are a safe and effective defense against deadly diseases, as underscored every year by the World Health Organization (WHO), which estimates that immunization saves the lives of 2.5 million people annually. And if broad strokes aren't persuasive enough, then take the success of the polio vaccine as a case in point: The linchpin of the Global Polio Eradication Initiative's (GPEI) efforts, the polio vaccine has helped serve the public-private partnership (comprised of Rotary International, UNICEF, the WHO, the U.S. Centers for Disease Control and Prevention and the Bill & Melinda Gates Foundation) in saving an estimated 18 million children from becoming paralyzed since 1988.

These staggering numbers make a very convincing development-based argument, as well as a compelling economic case for vaccines.

Vaccine-preventable diseases including measles and diphtheria are on the rise, with measles cases up by 30 percent worldwide.

An analysis of 10 vaccines for "94 low- and middle-income countries estimated that an investment of $34 billion for the immunization programs resulted in savings of $586 billion in reducing costs of illness and $1.53 trillion when broader economic benefits were included." Conversely, 100 million people are pushed into poverty every year by medical costs, costs that could be avoided in part by vaccination against preventable diseases.

Despite the myriad societal and economic reasons to support vaccines, they also serve as a litmus test for our society's level of trust in its institutions. This is reflected in the fact that vaccine hesitancy is regarded by the WHO as one of the top ten threats to global health in 2019. In other words, our attitude towards vaccines is as critical as the infectious disease epidemics themselves in determining global public health.

And the trends in vaccine hesitancy are concerning. Vaccine-preventable diseases including measles and diphtheria are on the rise, with measles cases up by 30 percent worldwide. It's no surprise that in the U.S., a 2018 study identified a nearly 70 percent uptick in documented parental/guardian vaccine refusals for children born in 2013, compared to children born in 2010. A young girl has her finger marked after receiving her polio vaccination in Angoram, East Sepik Province, Papua New Guinea in March 2019. © UNICEF/UN0292505/Holt

As incidents of vaccine refusal rise, we ask ourselves what can be done about the discrepancy between the proven science behind vaccines and the reality of anti-vaccine behavior. Ultimately, answers may be found in polio and the way we have taken on the deadly and paralyzing disease — which once terrorized America — over the last three decades.

As incidents of vaccine refusal rise, we ask ourselves what can be done about the discrepancy between the proven science behind vaccines and the reality of anti-vaccine behavior.

Since establishing the GPEI, Rotary, UNICEF and partners are closing in on one of the greatest public health achievements in history: polio eradication. Polio will become only the second human disease — after smallpox — to be banished to our past.

Our experience in this effort has taught us valuable lessons in taking vaccines out of laboratories and doctors' offices, and into the field to reach communities far and wide. Surprisingly, we have learned that education alone is not enough to convince people to accept a safe and effective vaccine. Recent studies on the psychology of vaccination indicate that while education reduces misbelief, it also reduces the likelihood that people already uneasy about the vaccine would plan to get it. 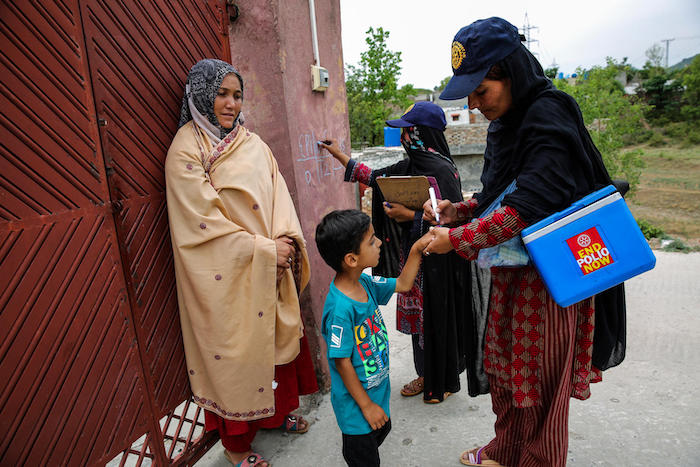 Female frontline health workers go door-to-door to vaccinate children against polio in Islamabad, Pakistan in May 2017. An identification ink mark is put on the finger of a child in Bari Imam village and the outside of the house is marked in chalk to show that the occupants have been vaccinated. © UNICEF/UN0139374/Zaid

To overcome refusals when they occur, the GPEI focuses on responding to local needs and human capacity building. For example, in Pakistan, 80 percent of frontline health workers in the polio eradication effort are women, as females are more trusted to enter households and interact with mothers and children to deliver the polio vaccine. Polio workers also deliver other valuable interventions to complement polio vaccination, such as health education and services for antenatal care, routine immunization, maternal health, and child nutrition monitoring and counseling.

Vaccine-preventable diseases such as polio can have serious and potentially life-threatening consequences, but the real infection at stake is misinformation and mistrust.

Additionally, as insight into the precise reasons for vaccine refusal in specific regions has beome clearer, the GPEI has adapted its strategies appropriately, such as engaging religious and community leaders to enlist their support, and by building public trust in health services.

Vaccine-preventable diseases such as polio can have serious and potentially life-threatening consequences, but the real infection at stake is misinformation and mistrust. As we focus our efforts on protecting vulnerable groups, including children, against the spread of disease, we must ultimately bridge scientific innovation with a personalized approach. If we do this for vaccines, it will provide a blueprint for overcoming impasses in other global health challenges for which we have the science, but not yet the unanimous support, to effect transformative change.

Top photo: Held by her mother, Inna, 1-year-old Dana didn't cry when she received her first dose of measles, mumps and rubella (MMR) vaccine at Children's Policlinic No. 1 in Obolon district, Kyiv, Ukraine in April 2018. A recent measles outbreak in the Ukraine affected 16,500 people and killed 13, including 9 children. © UNICEF/UN0201055/Krepkih