What Do Water and War Have to Do With Each Other? Tragically, a Lot

When the threats of conflict and water insecurity coincide, children's odds of survival plummet.

Families living in areas besieged by conflict worry about their safety moment to moment.

Yet it's often waterborne illnesses that pose the greatest danger. Worldwide, diseases caused by unsafe water are a leading cause of death for children under five, killing nearly 1,000 kids every day.

When the two threats of conflict and water insecurity coincide, children's odds of survival plummet. Conflict destroys the infrastructure that provides water — and children searching for water often must travel through dangerous regions. At the same time, conflict destroys or compromises healthcare supplies and facilities kids need when contaminated water makes them sick.

UNICEF works to solve this deadly problem. Since 1990, UNICEF and partners have helped provide 2.6 billion people with clean drinking water. Over ten years, between 2006 and 2016, the UNICEF Tap Project connected more than a half million people to safe water. Yet despite such successes, the need for clean, safe water is growing. Largely because of conflict, climate change and the migration crisis, 1 in 4 children across the globe — 600 million children in all — will live in areas of extremely high water stress by 2040. And it's the children already most disadvantaged that will suffer the most.

Syria, Iraq and Yemen are just three regions where water insecurity combines with conflict to the endangerment of children. Below, three snapshots show how a lack of safe water hurts kids — and what UNICEF is doing to help.

In the Syrian capital of Damascus and its surrounding area, more than 5.5 million people — including 2 million children — have been cut off from running water. In better times, much of the city's drinking water came from the Wadi Barada area. But the water supply there has been ruined by shelling. Since then, just 120 wells, rehabilitated and equipped by UNICEF, have been the sole source of water for the entire city.

Without safe water, families already living under intensely dangerous conditions are at further risk of disease. And with hospitals also succumbing to shelling, healthcare is not always available for those falling sick. Afnan, 11, fled Damascus, Syria, four years ago with her parents and four siblings. Since then, the family has struggled to find clean, safe water. Here, Afnan finds some provided to her school by UNICEF. © UNICEF/UN048103/Nader

UNICEF has responded by getting generators running in Syria and delivering four thousand gallons of fuel daily to increase water pumping capacity — as well as trucking water to 84 schools in Damascus and rural areas outside the city, ensuring that the students don't go without. 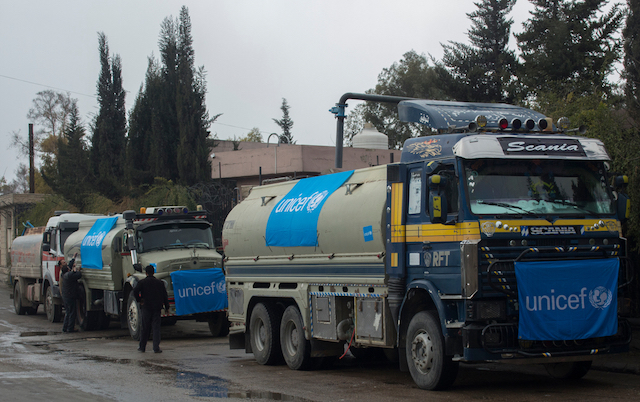 UNICEF-supported trucks line up to fill their tanks with water from wells rehabilitated and equipped by UNICEF.

In Mosul, battling between coalition forces and ISIS has meant suffering and hardship for a majority of the nation's children. More than 11 million people — including 5.1 million children — need humanitarian assistance. Two-thirds of Iraq's kids are out of school, and far too many have been forced from their homes and have succumbed to kidnapping, dehydration and disease.

UNICEF is on the ground working to meet every one of these challenges. After water pipes were intentionally destroyed in battles last year, UNICEF responded by trucking in hundreds of thousands of gallons of water to the families displaced by the violence — in addition to supporting health, nutrition and emergency services. 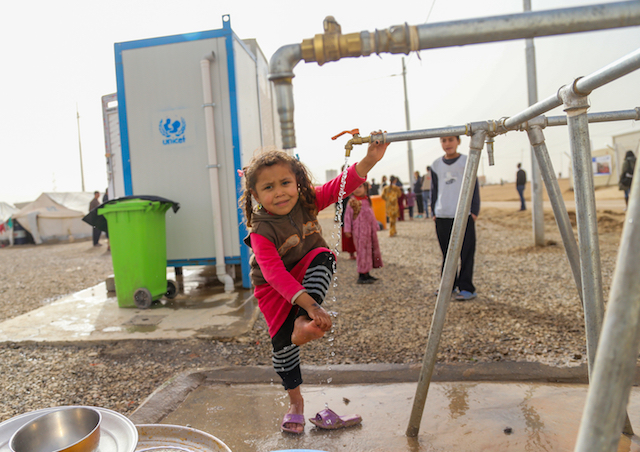 Four-year-old Athra was forced from her home in Mosul by escalating, violent conflict. Now she lives at the Debaga Camp in Erbil Governorate, Iraq, where she can wash at a UNICEF water tap. © UNICEF/UN042718/Khuzaie

In Yemen, two years of civil war has left a tattered infrastructure and a weakened population. Four thousand people have been killed by airstrikes and other violence, including more than 1,300 children. And an astounding 15 million people — of a total population of about 28 million — can get neither safe water nor health services. In the outskirts of Sa’ada city, Yemen, a rising number of people, many of them displaced from their homes by conflict, are in need of water — but with no intact municipal water system, it's hard to come by. To help solve the problem, UNICEF and partner Al Atta have set up free water points like this one. © UNICEF/UN026923/Rahmah

Despite brutal conditions, UNICEF has managed to get help to Yemeni families. The children need education, nutrition, healthcare, protection and more — but the most daunting problem, says former UNICEF Yemen Representative Julien Harneis, has been getting water to them. "The water table is 400 meters below ground," Harneis explains. "So you need generators to get water. And for that you need fuel. In the early months of the conflict, there was essentially no fuel in Yemen. We negotiated with the Houthis in Sana’a — an armed group — plus other armed groups, the Yemen Petroleum Corporation and the water authorities in Yemen’s 11 major cities. After three weeks of negotiation, we arranged fuel for water systems. Only then could we arrange delivery of water." War, deep wells and lack of fuel for pumps have left about 15 million people without enough water.

Worldwide, lack of adequate water is a growing problem, according to a new UNICEF report: Thirsting for a Future: Water and Children in a changing climate.