How UNICEF Delivers Aid to Children in Yemen Despite Brutal Conflict

UNICEF has been in Yemen for more than half a century providing assistance to the country's children. But in the past year, crushing conflict has made this work ever more dangerous. UNICEF's Representative Julien Harneis tells us what it's like on the ground.

What does UNICEF do in Yemen?

JULIEN HARNEIS: We deliver water to more than 5 million people across the country. We’ve vaccinated millions of children for polio and measles. We cure children of malnutrition. We make education available and monitor child rights. We offer protection during a time of intense upheaval.

With shelling and bombing — with hospitals, bridges and airports down — how is UNICEF's work possible?

HARNEIS: We use a network of small boats to get into every part of the country. Then we work through local organizations and local governments to deliver aid to as many children as possible. On average over the past year in Yemen, six children have been killed or injured every day. "I cannot walk, move or even step out of my house," says Amjad Alwan. "We were always poor but we never feared dying like now.”

Does it ever get to the point where you say, "We just can't help anymore"?

HARNEIS:  When the air campaign started in March 2015, we had to evacuate all UNICEF internationals to Oman. But we continued to deliver supplies and assistance in Yemen, thanks to very courageous national colleagues who have stayed throughout. We worked to devise a safe base and build up our presence. We now have 150 colleagues in five locations — about 120 nationals and about 30 internationals.

Tell us about a specific challenge faced by UNICEF.

HARNEIS:  In the first days of the intensified conflict, the seaports were blocked. The airport was bombed. They blew up the airstrip in Sana'a again and again. But we managed to negotiate locally to open the airport, fix the airstrip and send in planes full of supplies. Our colleague Yasser, a really great logistics guy, drove between Sana'a and the airport preparing so that when those planes got in, we could get supplies to Yemeni children. Just as Yasser was getting to the airport, the car in front of him got hit. It was destroyed. But Yasser kept on going. He was focused on getting help to children.

HARNEIS: UNICEF depends upon bravery to reach the children of Yemen. In Saada there were bombings, and a man named Sanan stayed all the way through. In Aden, the Houthis started bombing large chunks of the city, and colleagues there continued to deliver assistance.

What's one of the most daunting problems for Yemeni families?

HARNEIS:  Getting water. Yemen has a population of about 25 million. It has a very low water table and so has always had problems with water, but the current conflict has made this problem much worse. Now about 20 million people need some kind of support to get clean, safe water. 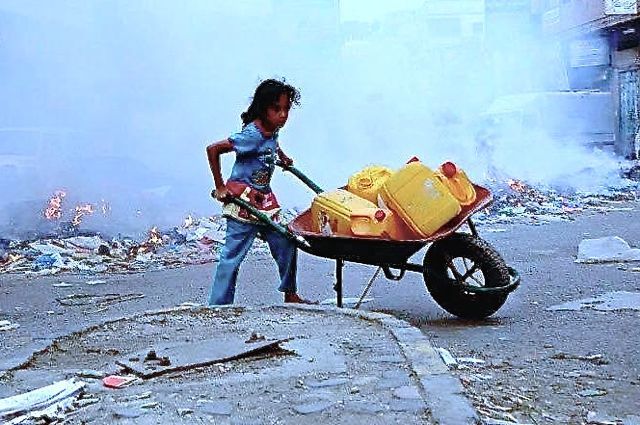 War, deep wells and lack of fuel for pumps have left 19 million people without enough water. UNICEF has reached 2.6 million with aid since the beginning of the year, and plans to reach over 5 million by the end of 2016.

How have you been able to help?

HARNEIS:  The water table is 400 meters below ground, so you need generators to get water. And for that you need fuel. In the early months of the conflict, there was essentially no fuel in Yemen. We negotiated with the Houthis in Sana’a — an armed group — plus other armed groups, the Yemen Petroleum Corporation and the water authorities in Yemen’s 11 major cities. After three weeks of negotiation, we arranged fuel for water systems. Only then could we arrange delivery of water.

How did you come to agreement with armed groups?

HARNEIS:   It was complex, but it worked, because everybody has one thing in common — we all want water for our kids. We all have families.

How has the conflict impacted children's health?

HARNEIS:   We estimate that nearly 10,000 children under 5 years old have died in the past year from preventable diseases such as diarrhea, pneumonia or measles. Parents are scared to bring their children to health centers for fear of being killed or wounded by a bomb or bullet on their way. And Yemen has the second highest number of malnutrition cases in the world. There are 320,000 acutely malnourished children who require urgent treatment. We have been able to provide care for 2,000. So much remains to be done.

HARNEIS:  We need to scale up our lifesaving response. And we’ll have to deliver supplies in areas controlled by al-Qaeda, by the resistance, by the Houthis. To do this, we must collaborate with local Yemeni health workers. I salute these health workers. They keep at it, despite every obstacle. With their help, we can succeed. 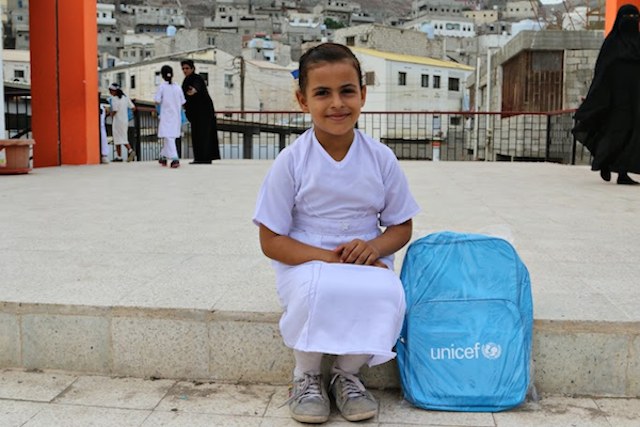 For the 387,000 children whose education has been disrupted, UNICEF offers hope. "I wait for it every year," says Jasmine Abdullah of her blue UNICEF backpack of supplies. "It helps my dad so much."