Flood-stricken families are struggling to survive as a climate disaster unfolds in Pakistan.

Since June, torrential monsoon rains and floods have inundated large swathes of Pakistan, dumping up to five times the 30-year average rainfall and impacting at least 33 million people, according to the government of Pakistan. More than 3 million children are in urgent need of humanitarian assistance, and at increased risk of waterborne diseases, drowning and malnutrition.

More than 1,100 people have died — a third of them children — and the death toll is expected to rise as flash flooding continues. Nearly 1 million homes have been damaged or swept away. Livestock, crops and orchards are gone, robbing families of their livelihoods.

"This is a calamity of biblical proportions," Abdullah Fadil, UNICEF Representative in Pakistan, told the BBC World Service on Aug. 29. "It's worse than the 2010-11 floods, and it has now impacted all the provinces in the country."

'Pakistan needs all the support it can get at the moment'

Over 1,864 miles of roads and 145 bridges have been damaged or destroyed, cutting off some districts, stranding families and children and impeding the delivery of emergency aid.

Despite the challenges to access in some parts of the country, UNICEF has already delivered lifesaving humanitarian supplies worth $1 million and provided emergency services in three provinces — Balochistan, Sindh and Khyber Pakhtunkhwa. Another $1.3 million will be distributed to meet urgent needs. UNICEF is delivering safe drinking water, medical supplies and vaccines, therapeutic food supplies and hygiene kits for children and families. UNICEF is also establishing temporary learning centers and looking after the protection and psychosocial well-being of children caught up in the climate change-related crisis. 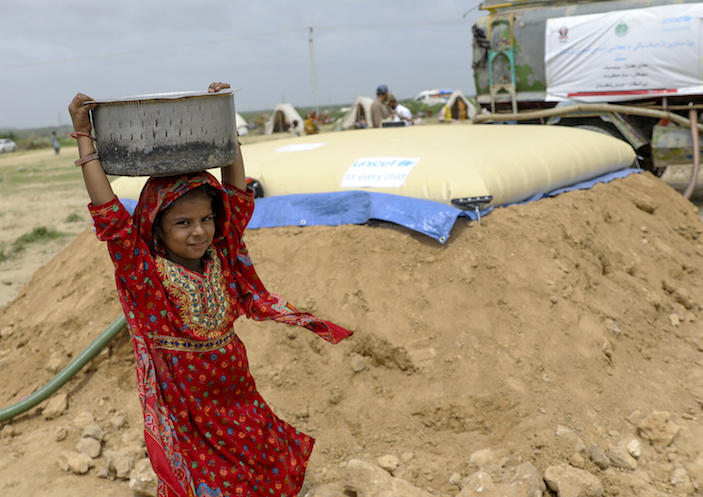 On August  28, 2022, 9-year-old Arshia returns to her tent after collecting water from a collapsible tank installed by UNICEF in the army-run camp where she and her family have taken shelter in Thatta district, Sindh Province, Pakistan. © UNICEF/UN0694844/

UNICEF has set up temporary health centers to provide a range of essential health and nutrition services, including prenatal care for pregnant women and immunization to stop the spread of infectious disease. Vaccines to prevent cholera and polio have already been administered to more than 4,000 children. Over 3,000 children and 1,000 pregnant women have been screened for malnutrition and enrolled in outpatient therapeutic nutrition programs or given micronutrient supplements as appropriate.

Many of the hardest-hit districts are among the most vulnerable in Pakistan. Even before the current crisis, children living in these areas disproportionately suffered from high rates of malnutrition and poor access to water and sanitation. Many were not in school.

"We're asking the entire world to respond to this catastrophic climate event," said Fadil. "We are doing what we can ... but that's not enough. The UN has launched with the government of Pakistan asking for $160 million for immediate lifesaving needs, and we need this in the next few weeks because in two months' time the winter will start in Pakistan and the misery will get even worse if we do not act now."