After nearly nine years, Syria's civil war has created a generation of children growing up with no memory of peace. The psychological and emotional consequences are enormous.

"Almost every kid in Syria needs psychosocial support," said UNICEF's Representative in Syria Fran Equiza. "They have been living ... in a condition in which the conflct is being resolved by violence, not by dialogue."

Displacement has become the "new normal" for Syria's children

The conflict has driven more than 6 million people out of their homes, many of them forced to relocate multiple times. Some 2.5 million Syrian children are living as refugees outside the country. "Being displaced has become the new normal, for these children," Equiza explained.

Displaced by violence, a family shelters from the cold at an informal tented settlement in Killi, Idlib Governate, Syria near the Turkish border on November 16, 2019. © UNICEF/UN0348581/Saad

Children growing up in Syria live in constant fear that a bomb is going to fall on their school or their home or that they will have to grab a bag and relocate at a moment's notice, said Equiza.  Many have lost relatives to the war. All the children he speaks with share a common wish: "I want to be alive the next day."

Earlier this week in #Deir_ez_Zor 7 children died and 20 injured when unexploded remnants of war went off in their school. Terrible reminder of dangers facing children in #Syria even after violence stops. Almost 3M children in Syria are at risk of exposure to explosive hazards

"When children grow up in armed conflict, their deep mental scars are often overlooked," said UNICEF Executive Director Henrietta Fore. "Prolonged exposure to violence, fear and uncertainty can have a catastrophic impact on children's learning, behavior and emotional and social development for many years. If ignored, toxic stress from witnessing or experiencing traumatic events can lead to an increase in bedwetting, self-harm, aggressive or withdrawn behavior, depression, substance abuse and, at worst, suicide."

In a November 2019 video interview, UNICEF Representative in Syria Fran Equiza reports on the plight of families displaced by recent fighting in northeast Syria, and describes how UNICEF helps children cope with the terror and uncertainty of life in a war zone.

Parents want to help their children recover from trauma and become emotionally healthy, but many don't know where to begin. To help children heal, UNICEF works with partners to provide psychosocial support programs centered on theater, art, music and sports. Play is the work children do, and helping them get back to being children is essential for healthy development.

"UNICEF has very strong programs in psychosocial support for the kids," said Equiza. Children act out their fears in theater improv classes, draw and paint pictures expressing their hopes and dreams, sing and dance and play sports to express themselves and imagine a world outside the conflict zone. 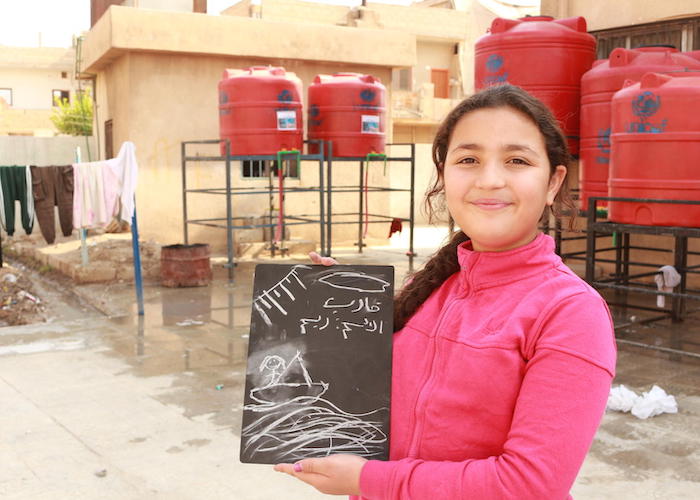 Rim, 10, and her family fled violence in Ras al-Ain, Syria in October 2019. They moved into a school converted to a shelter in Hasakeh city, where she participated in a UNICEF-supported art therapy program. © UNICEF/UNI229178/Hasen

Escalating violence forced 10-year-old Rim and her family out of their home in Ras al-Ain in October. They took shelter in a converted school in Hasakeh city, where Rim participated in a UNICEF-supported art therapy program. Rim dreams of becoming a humanitarian worker when she grows up, so she can help displaced families and people in need. "I dream of peace in Syria," she said. "I wish for families to go back to their homes and for children to go back to school."

All children have the right to a normal life. UNICEF and partners are reaching children living in shelters in Syria and in refugee camps across the region with the psychosocial support they need to alleviate some of their distress and help them cope with the impact of conflict so they can resume their childhoods and prepare for a brighter future. In 2020, UNICEF humanitarian programs across all sectors will reach 10 million people in Syria. You can help.

Top photo: On October 28, 2019 at a shelter in Hasakeh City, Syria, 12-year-old Amani takes part in an activity organized by UNICEF staff to give displaced children a sense of normalcy. "If I had the power, I would end this conflict right now so that people can go back to their homes and children to their schools," said Amani. "The sounds of the attacks were frightening. My younger siblings cried because they were afraid, and so we decided to leave." © UNICEF/UNI229174/Hasen