UNICEF Is Helping Iraqi Youth Heal From Violence and Trauma

Iraq's next generation is scarred by a brutal war. UNICEF and partners are giving them the tools they need to resume their lives and build a better future.

In Debaga camp, rain slaps steadily on tents where children sit clustered near a space heater, trying to stay warm and dry as winter wafts over northern Iraq. Nearby, a group of over a dozen boys pass a volleyball over the net wildly, as icy winds blow and drizzle wets the concrete they play on. In rooms just beyond the volleyball court, young girls and their mothers circle around a teacher offering a vocational course.

Many of the children have endured terrible violence and trauma in recent years, fleeing from the brutal rule of the Islamic State, or the fighting to oust them. And in some cases, the trauma has carried over into continued violence in the home, school and in the street.

Fortunately, in camps like Debaga in Iraq's Erbil Governate, UNICEF is stepping up to offer support for these children. Through sports activities, education, shelter and psychosocial support, UNICEF and partner organization Terre Des Hommes (TDH) are helping them to heal, grow and live a better life. 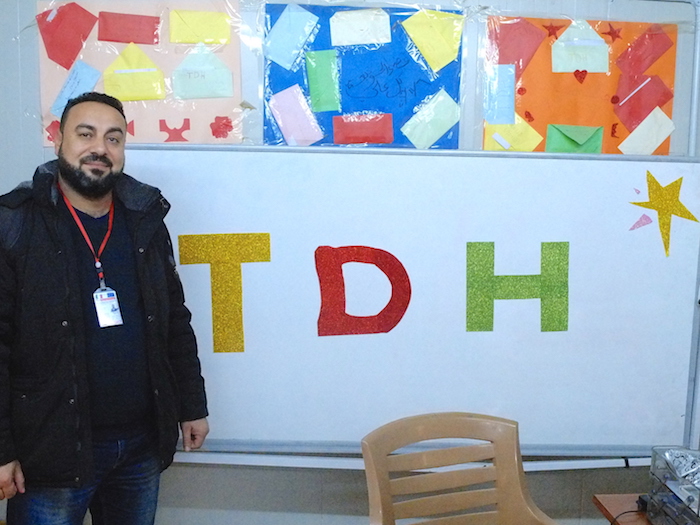 Ayad Hamad, a project manager with TDH working in the Debaga camp, described the various kinds of violence children face both outside and in the camps.

“Five percent of children in camps quit school because teachers are beating them. They often mention emotional violence as a reason too. In Iraq, we’ve had corporal punishment for many years. Some educational laws have been set to avoid this approach, but headmasters push the practice anyway.”

Hamad said that even after children fled the tremendous violence in their home villages and towns, some continue to face forms of violence. He said many children face neglect from their parents — themselves facing the psycho-emotional consequences of violence and instability — who don’t show their children enough attention or listen to them. Some children are sent to work to earn money for their destitute families, putting them under undue stress and exposing them to dangers in the streets.

He noted that a large survey carried out by TDH in November 2018 found that around 40 percent of Debaga camp’s children suffer from physical punishments, spending many hours outside of the home to escape the abuse from their parents.

But TDH is working hard to help the children recover their health, both emotional and physical, Ayad said.

“In the camp, we employ psycho-social workers. They identify fifteen children at a time here who experienced major trauma, and we give them five months of psychosocial support. After the first class graduated, they spoke about their experiences. Before, they were feeling isolated and ignored, and had no hope to live. After [graduating] they re-enrolled in classes and got involved in TDH recreational and educational activities and started to make friends. Even their parents said they’re speaking and expressing more.”

Counselors work to help the children recover their health, both emotional and physical Mahmoud (name changed for his protection), 17, hadn't been to school since 2007. With UNICEF's help, he is now continuing his education in Debaga camp.

Mahmoud, whose name was changed to protect his identity, is 17 and came to Debaga camp from the town of Hawija two years ago. He said he fled from the intense violence of the Islamic State (ISIS), who occupied his town, and the constant air bombardments on Hawija by the Coalition seeking to oust them.

His older brother, with whom he lives in the camp, has been traumatized by the conflict, like so many others. Because of the stress of Mahmoud’s own trauma, and that of his brother, they often fight. But Mahmoud says that THD assistants have helped him and his brother resolve their conflicts peacefully, pointing to one who’s been especially helpful, Rahma, who sits beside him during the interview.

Mahmoud, who hasn’t attended school since 2007, says he’s been joining TDH-organized literacy activities, helping him to gradually pick up where he left off in his studies years ago.

The educational and entertainment activities also help break out of the emotional turbulence of post-violence trauma.

“TDH organizes workshops on literacy and computer skills and activities like volleyball and soccer. When I’m feeling really stressed thinking [about past events], I join the boys to play some volleyball, and I feel a lot better afterward.”

Resuming their educations and learning to resolve conflicts peacefully 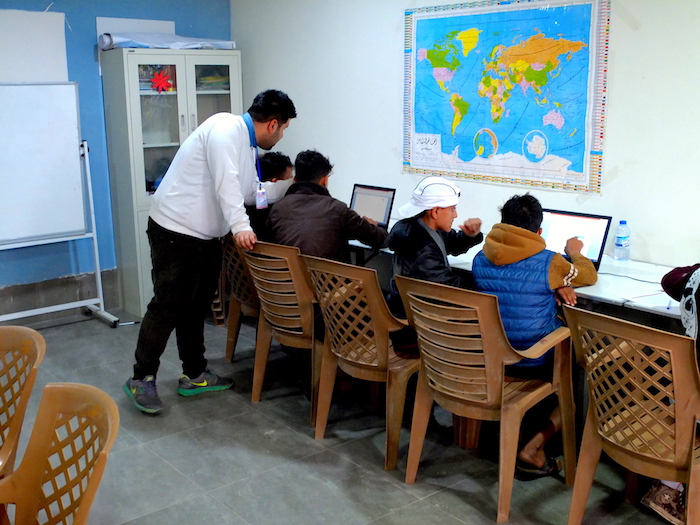 Aziz (name changed), 11, also fled from the Hawija area, arriving in Debaga camp close to two years ago. He wears a sweatshirt hood pulled over his dark brown curls. His father was killed in an airstrike in Hawija, and Aziz himself was hit by shrapnel in the strike. He described the violence he faced since fleeing as a result of his own mother’s trauma.

“Sometimes my mom remembers the things we went through [in Hawija], or remembers my brothers or father who are gone, and she gets upset. She screams at me and hits me sometimes,” he said shyly.

Speaking about Rahma, and another TDH camp assistant, he said their face-to-face interventions with his mother have been helpful in reducing her bouts of aggression.

“She still gets upset, but now that Rahma and Jivan have come to talk to her, she’s become aware of her attitude,” Aziz said. “So when she acts out, very quickly she’ll apologize.”

But it’s not only at home. In school, too, Aziz fears the threat of violence. “If there was something we didn’t know in class that we were supposed to be studying, or if we spoke in class, teachers were hitting us.”

But, ever since THD’s interventions, which train teachers to practice positive discipline, the violence has decreased. “Teachers’ methods have gotten gentler. They take care of us. They teach us well. I wasn’t able to read before, but with their help, I’m getting there,” Aziz said. 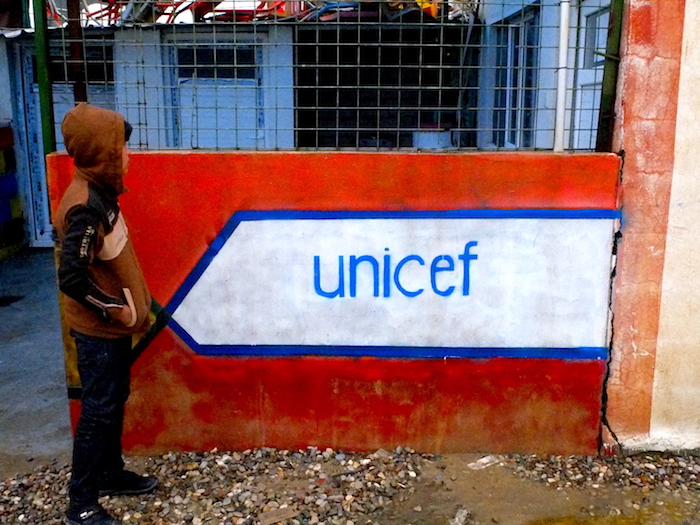 Laila Ali, a spokesperson for UNICEF in Erbil, Iraq, says that while much of the headline-grabbing war has died down in Iraq, children still bear the brunt of the violence that remains.

“Although large-scale conflict has ended, children are still at risk. 1.8 million children are still displaced in Iraq. 4 million of them need humanitarian assistance,” she said, noting that children have endured incredible trauma in recent years such as being forced to fight, and being used as suicide bombers.

She also noted that because of prevailing attitudes and the traumatic stress incurred through years of conflict, domestic violence is widespread, leaving children without the sanctuary of the home.

“Even in places where children should find refuge, they’re still experiencing violence. In these cases, children have been victimized more than once: out in the street, and again at home.

Home should be a refuge, but domestic violence is widespread 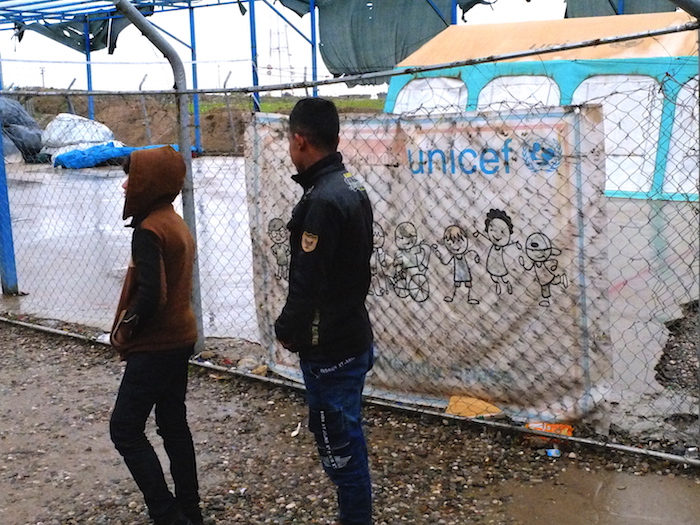 Aziz, 11, and Mahmoud, 17 (names changed), in front of their tent in Debaga camp in Iraq's Erbil Governate.

To combat violence against children in schools, UNICEF is training teachers to use positive discipline to explain students' mistakes, instead of resorting to violence as a means of teaching. UNICEF is also connecting teachers and social workers. Teachers are trained how to identify children suffering from stress and trauma incurred through conflict so that social workers can provide early and targeted psychosocial support to students. Children are safe from violence in Iraq's Debaga camp.

Ismail (name changed), 15, has seen tremendous violence and has been displaced numerous times. Also from the embattled town of Hawija, he fled to the villages outside the city to avoid airstrikes with his family in 2014. While leaving territory under ISIS control, Ismail’s uncle was killed in front of his eyes, and Ismail was put in prison for three days.

Because of his trauma, he said, “I became really aggressive. I fought a lot. I was so angry with ISIS. And after I saw my uncle killed, sometimes I would go for whole days without eating or drinking, out of shock. I used to lose control when I got angry. I was getting so stressed I would faint.”

Yet since coming to the camp, and getting involved with TDH, Ismail says that things are getting better, as TDH staff work with him to release his pain, and heal.

“I spend time with the teachers, like Mr. Serdab,” he said, nodding to the teacher seated near him. “We chat, we laugh — these were things we couldn’t do under ISIS. They didn’t let us play games like backgammon or chess. Here we can play. I feel so much better after talking with the teachers.”

“UNICEF definitely helped me. [Because of my trauma] I used to sit alone, isolating myself. But the camp assistants often came and said, ‘Why are you all by yourself? Come join the boys and play volleyball. You don’t have to get mad or depressed.’”

Chatting, laughing, playing volleyball — gradually, the boys release their pain and begin to look toward a brighter future

Boys play volleyball outside a series of offices for computer classes and women's vocational training, in Debaga camp.JPG 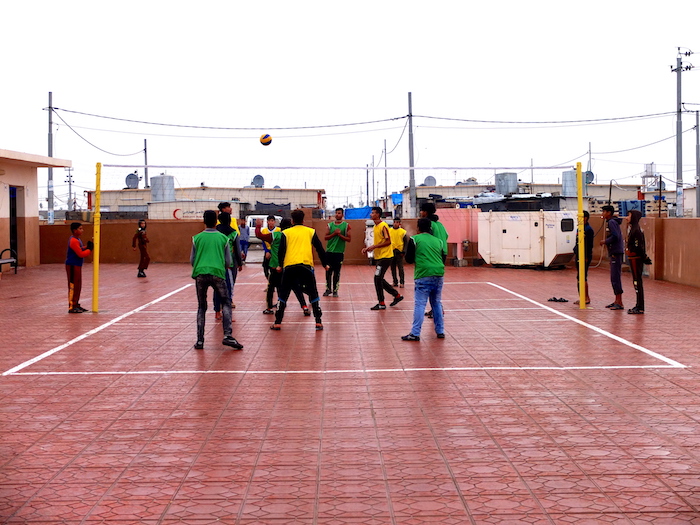 Boys play volleyball outside a series of offices for computer classes and women's vocational training, in Debaga camp in Iraq.

Ismail’s friend, Omar (name changed), is 14, from Adlah village in the province of Kirkuk. He has round white teeth and matted brown hair. He says he used to experience violence both in war, and in school.

“Airstrikes hit our villages and killed kids sometimes. We were just terrified of going outside our houses. I couldn’t sleep,” he said. “In my village, the teachers used to hit the students. Sometimes they even did this in the camp. All this hitting filled me with fear.”

Because of the constant threat of harm, Omar was in a state of hypervigilance. He said solemnly, “I was nervous all the time. I was getting upset every time I remembered the past.”

But since coming to Debaga, he said that with TDH’s help he doesn’t suffer so much anymore — he sleeps better now.

“Thanks to the help of UNICEF and TDH, we get to take computer courses. We play volleyball. Here we learn, and we get to laugh and talk. I feel really good.”

Asked what he wants to do once it’s safe enough to leave Debaga and return home to Adlah village, Omar thought for an instant, eyes upturned towards the ceiling, then said, beaming, “In the future, I want to become a doctor. I want to heal the wounded and help people in my village.”

UNICEF and partners are working tirelessly in Iraq, Syria, Yemen, South Sudan, Bangaldesh and around the world to save and protect children. With a presence in more than 190 countries and territories, UNICEF has helped save more children's lives than any other humanitarian organization in the world.