UNICEF is working with partners to rush emergency supplies to children and families in the remote island nation.

Late on the afternoon of January 15, 2022, an underwater volcano erupted violently in the South Pacific, sending up a high plume of ash and triggering tsunami waves that crashed ashore in coastal areas of Tonga's capital, Nuku'alofa, along with several other low-lying Tongan islands.

The eruption of the underwater volcano, Hunga Tonga-Hunga Ha'apai, is said to have been one of the biggest in the world in the past 30 years. James Garvin, the chief scientist at NASA's Goddard Space Flight Center, told NPR the blast was "around 10 megatons of TNT equivalent," making it more than 500 times as powerful as the nuclear bomb dropped on Hiroshima, Japan in 1945.

On January 15, 2022, a satellite image captured an explosive eruption of the Hunga Tonga-Hunga Ha'apai underwater volcano, located in the South Pacific Kingdom of Tonga. © UNICEF 2022

The majority of the remote island nation has been blanketed by volcanic ash, impacting safe water supply. Air quality is also a concern, along with the outbreak of waterborne diseases. The tsunami inundated coastal regions, leaving inland floodwaters and damaged infrastructure behind.

UNICEF is mobilizing emergency supplies prepositioned in a humanitarian warehouse in Brisbane, Australia for immediate deployment to Tonga. Some 44 palettes of supplies will be loaded for shipment on the HMAS Adelaide of the Royal Australian Navy, including: 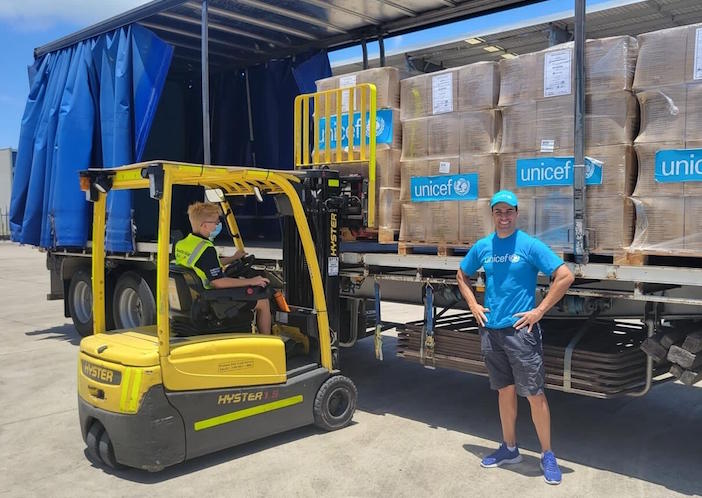 Safe drinking water is an urgent concern. Chlorine testers and water purification tablets from UNICEF's Fiji stock are ready to be delivered once transport becomes available. Most Tongans depend on rainwater collected in tanks, many of which have been contaminated by volcanic ash. The current water system must be disinfected and rehabilitated in affected communities, schools and health care facilities.

Eighty church volunteers previously trained by UNICEF will provide psychological first aid and psychological support to traumatized children and their families. Child-Friendly Spaces will be set up where children can play safely.

The central warehouse where vaccines are kept remains undamaged. Other supplies being readied for future delivery as needed include:

A devastating tsunami hit Tonga within minutes of the Hunga-Tonga-Hunga-Ha’apai underwater volcano eruption.

UNICEF Pacific is working together with the Government of Tonga and its partners to reach families and children with the support they urgently need. pic.twitter.com/jpFgefPmom

To cover the anticipated needs of Tongan families affected by the volcanic eruption and tsunami, UNICEF Pacific requires $2.7 million in immediate emergency funding. You can help.