Thousands of Children at Risk After Earthquake Devastates Afghanistan

As the death toll rises, UNICEF and partners are rushing aid to those in need in the wake of a powerful earthquake in eastern Afghanistan.

UNICEF has dispatched health teams and emergency supplies after a powerful earthquake shook Paktika and Khost provinces in eastern Afghanistan early on June 22. The earthquake, recorded at a depth of six miles, was reportedly felt in neighboring provinces including Kabul, as well as Islamabad, Pakistan and India.

According to The New York Times, at least 1,000 people have been killed. "We don't yet know the extent of the devastation," said UNICEF Afghanistan Representative Dr. Mohamed Ayoya. "Many more have been injured and many homes destroyed. These numbers are expected to grow as reports continue to come in."

A devastating earthquake shook multiple districts in Paktika and Khost provinces in #Afghanistan. Reports of hundreds of lives lost and injured, many homes damaged.
Heartbreaking images are coming from the region. pic.twitter.com/m7sdDT5xoi

The quake struck about 28 miles from the city of Khost, the capital of Khost Province. Spira district in Khost Province was affected, along with the districts of Gayan, Barmala, Naka and Ziruk in Paktika Province.

The de facto authorities have requested the support of UNICEF and other UN agency teams who are joining efforts to assess the situation and respond to the needs of the affected communities. UNICEF medical and nutrition teams are working to provide first aid for those who are injured. 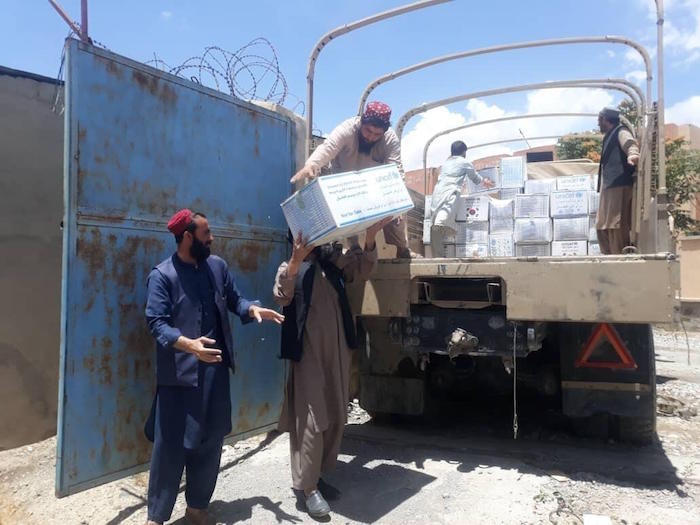 On June 22, emergency supplies were loaded onto trucks at UNICEF's warehouse in Paktia Province to be dispatched to areas hit by the earthquake in eastern Afghanistan. © UNICEF/UN0660046/UNICEF Afghanistan

"We stand in solidarity with the children and families affected during this difficult time," said Ayoya.

Top photo: Damage is seen in the Spera district, in Khost Province, after a devastating earthquake hit eastern Afghanistan in the early morning of June 22, 2022. © UNICEF/UN0660054/UNICEF Afghanistan