Syria Under Siege: A Convoy Gets Through to a Town Under Attack

More than a week ago, an inter-agency convoy was bombed as it carried aid to blockaded eastern Aleppo, with aid workers killed and UNICEF supplies destroyed. Yet UNICEF continues to do everything possible to bring relief to the people — and especially to the children — living under fire in Syria. This week, we managed to get critical supplies into the town of Madaya as part of another inter-agency convoy. UNICEF Syria Deputy Representative Mirna Yacoub tells us what it was like to deliver humanitarian aid to people who have spent months in isolation.

Driving towards Madaya in a convoy that snaked along the Damascus highway for hundreds of meters, a huge knot formed in the pit of my stomach. Not knowing what we would find there, and remembering the harrowing images of emaciated children pleading with their eyes for some respite from this siege, it was hard not to be worried – the type of worry that seeps into your bones.

As we made our way through the towns just before Madaya, the silence was eerie. Row upon row of abandoned restaurants, shops with shutters rusted closed, homes padlocked, overgrown gardens and thirsty shrubs that had long turned brown. The emptiness and neglect were stark.

Children everywhere — running beside the convoy, their excitement irrepressible.

After hours of waiting at checkpoints, we slowly moved into Madaya itself, as the sun started to set. I was immediately struck by what I saw, wondering if I was in the right place. As we drove through the town ever so slowly, U.N. cars with flags flying high followed by truck after truck of lifesaving supplies, they all came, despite the late hour.

Children everywhere — running beside the convoy, their excitement irrepressible. Women watching from balconies, young men standing staunch on street corners, suspicious but slightly relieved that we were there. All of them escorting the precious cargo along its way. 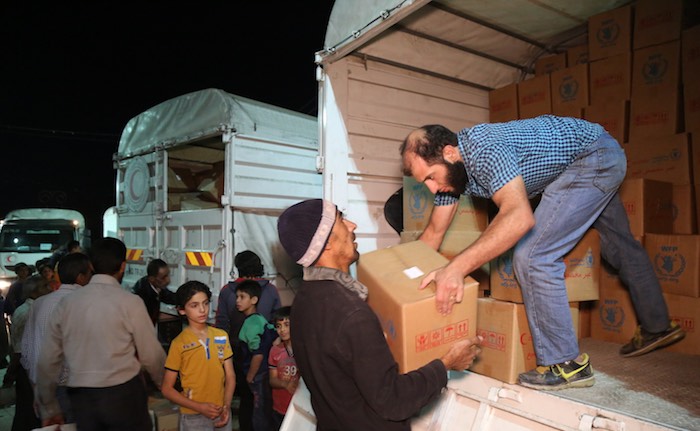 As soon as we disembarked, the unloading of supplies started. The UNICEF team headed straight for the makeshift health clinic. Like the Pied Piper, the women and children followed, calling the name of the UNICEF doctor they remembered from convoys past, “Dr. Rajia! Dr. Rajia!” They were so happy to see her again, hoping she would bring medicine… and some answers. They formed a line outside the clinic, willing to wait as long it took to see her.

Children could no longer walk straight because of the lack of micronutrients.

Patient after patient was screened by Dr. Rajia, all of them sharing stories: Parents whose children had stopped eating because their bodies could no longer tolerate only rice and beans. Children who could no longer walk straight because of the lack of vitamin D and micronutrients that had riddled their bones with rickets, or who had stopped growing entirely, stunted from lack of essential vitamins. One mother showed us her baby’s bottle filled with rice water — the teat so worn it had to be sewn back to together. “Look at what I am feeding my child,” she said.

Almost everyone we spoke to asked for protein — meat, eggs, milk, vegetables — something more to sustain themselves than the dry goods that were available. One mother explained that every time her child now smells boiled burgal — a local grain — she starts to cry.

Dr. Rajia reported an increase in miscarriages, more than ten cases in the last six months, because of the nutritional status of mothers. Over the last year alone, she has had to perform over 60 caesarian sections. This number was unheard of before the crisis, she told us. But women no longer have the strength for childbirth, and many pregnancies go over term, again because of the poor health of pregnant women.

We did not see widespread malnutrition as we had during past visits. This time it wasn’t the physical emaciation that struck us, but the psychological emaciation. The doctors reported 12 cases of attempted suicide, eight of them women. The prolonged siege was pushing people to the brink — some seeing death as the only way out.

The local health worker recounted the stories: a mother of five who felt she could no longer feed and care for her children; a high school student who wasn’t allowed to leave Madaya to take his national exams; a 21-year-old newlywed who had lost her husband in the violence and couldn’t find the strength to continue alone; a 16-year-old girl who could not see a future for herself in the hell that surrounded her. All of them tried to take their own lives — a last resort — the only possible escape from their daily horror. It was very clear that the coping mechanisms of people are starting to erode, their resilience truly tested in the face of a siege that they fear will have no end. 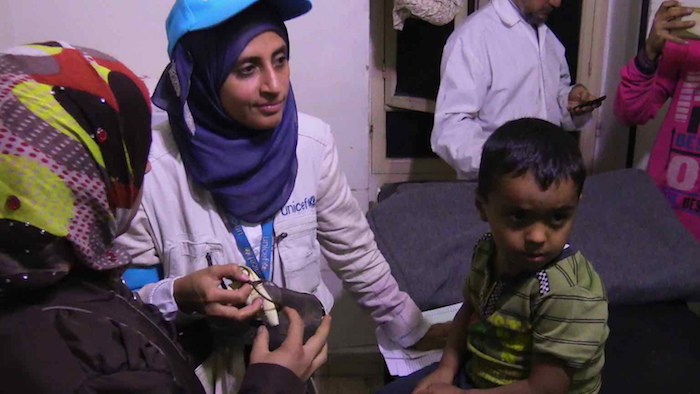 UNICEF provides health care, educational materials and children's clothes for 20,000 people in Madaya and the nearby town of Zabadani. © UNICEF/UN033481/Al Saleh, WFP

The doctors and health workers, though, demonstrated true resilience. Working in appalling conditions, they were without the most basic equipment and supplies.

One of the doctors told us that he has now resorted to using hair gel for ultrasounds, as he no longer has the medical gel to perform this most basic of tests. He showed us his operating theater. A mishmash of plastic drawers, old wooden shelves, and surgical supplies left on open trays that he sterilizes using flames because he has run out of alcohol. And yet he continues because not to do so is just not an option.

And yet [the doctor] continues because not to do so is just not an option.

And amidst all of this suffering, I met a ten-year-old girl. Undernourished but smiling at Dr. Rajia, she was so pleased to see her again. I asked her about school and what she wanted to do when she grew up. She looked at me with so much hope in those big brown eyes and said: “I want to work with you.” She hovered around the clinic until the last patient was screened, and as we walked up the stairs and out of the basement clinic, she took my hand and held it tight.

We made our way back into the street and she disappeared with her mom into the darkness. I pray that I will see her again in a Madaya that will, one day, be open.