UNICEF advocates came together virtually this March to meet with Members of Congress and raise their voices on behalf of the world's children.

UNICEF USA’s Advocacy Week, which took place March 22 - 26, 2021, showed that despite physical distancing, supporters of UNICEF can have equal — if not greater — impact by coming together virtually to raise their voices for the world’s children. Advocacy Week brought together UNICEF supporters from 46 states, plus Washington, D.C. and Puerto Rico, to meet with their Congressional offices and participate in digital advocacy activations.

The results surpassed all expectations, with more than 150 meetings and over 1,200 digital actions taken over the course of the week.

Just as impressive as the numbers are the stories of UNICEF’s fiercest advocates. More than 600 supporters raised their hand to attend Congressional meetings, so it is impossible to capture all of their stories, but here is a snapshot of some of the most compelling. 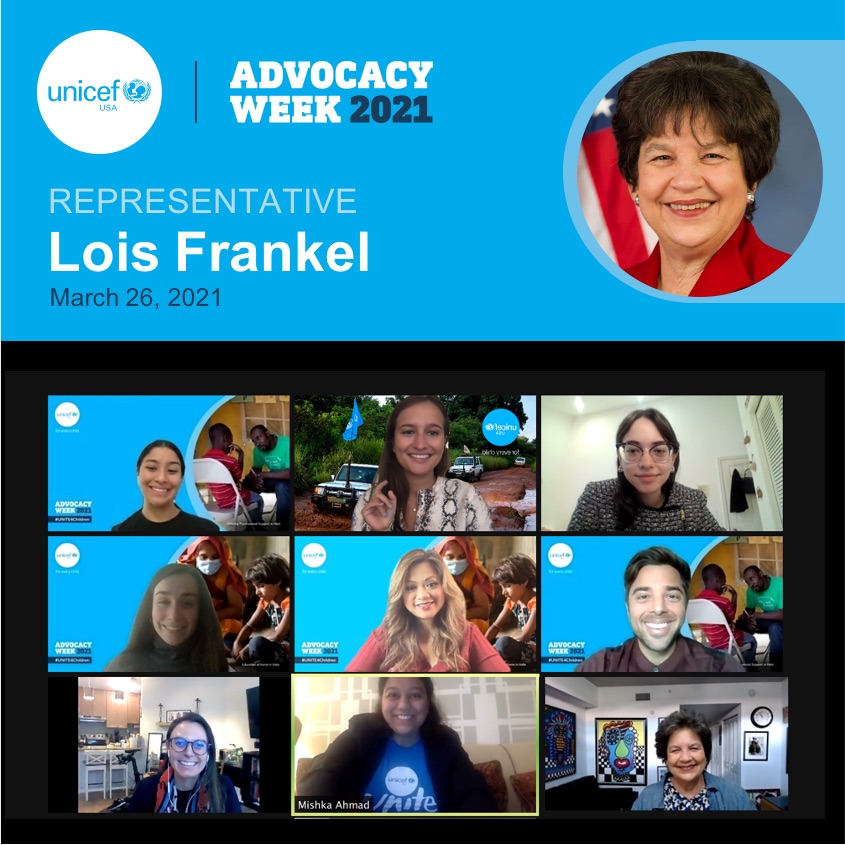 UNICEF supporters met with Congresswoman Lois Frankel (D-FL) during UNICEF USA's virtual Advocacy Week in March 2021 to discuss the importance of government support for UNICEF's lifesaving work on behalf of the world's children.

UNICEF supporters from Florida met with Congresswoman Lois Frankel on the final day of Advocacy Week. A historic champion of UNICEF in her position on the House Appropriations State, Foreign Operations, and Related Programs Subcommittee, Rep. Frankel shared that her support for UNICEF goes back even farther than her eight-year career in Congress. As a child, Rep. Frankel participated in Trick-or-Treat for UNICEF, collecting coins to donate to the organization every year on Halloween. As a child, she was proud to raise enough change to make a $10 donation. Today, the Congresswoman is even more gratified that she can use her position of leadership to secure critical funds for the world’s children.

UNICEF advocates also had the opportunity to thank Rep. Frankel for her leadership on the Keeping Girls in School Act and let her know that advocates were building support for the bill throughout Advocacy Week as one of the event’s main legislative asks. She expressed her gratitude during the meeting and again later that afternoon when she spoke at the Advocacy Week Closing Ceremony. She also shared her perspective on the importance of supporting equitable access to education for girls around the world.

Massachusetts UNICEF supporters had the opportunity to meet with one of their newest Representatives, Congressman Jake Auchincloss, who took office this January. Rep. Auchincloss shared his belief in the value of foreign aid and his conviction that children’s lives shouldn’t be determined by factors outside of their control. He was particularly compelled by the advocates’ discussion of UNICEF’s leading role in equitably distributing COVID-19 vaccines as the key delivery partner of COVAX.

His office followed up shortly after the meeting to share that Rep. Auchincloss planned to mention UNICEF in an op-ed for CNN. The essay makes the case for U.S. leadership in supporting the distribution of COVID-19 vaccines to low- and middle-income countries as a moral and public health imperative. This outcome is a testament to the relationship-building power of UNICEF advocates on the ground nationwide, and particularly in Massachusetts, where a meeting with a new Member of Congress led to national recognition of UNICEF’s work and mission. 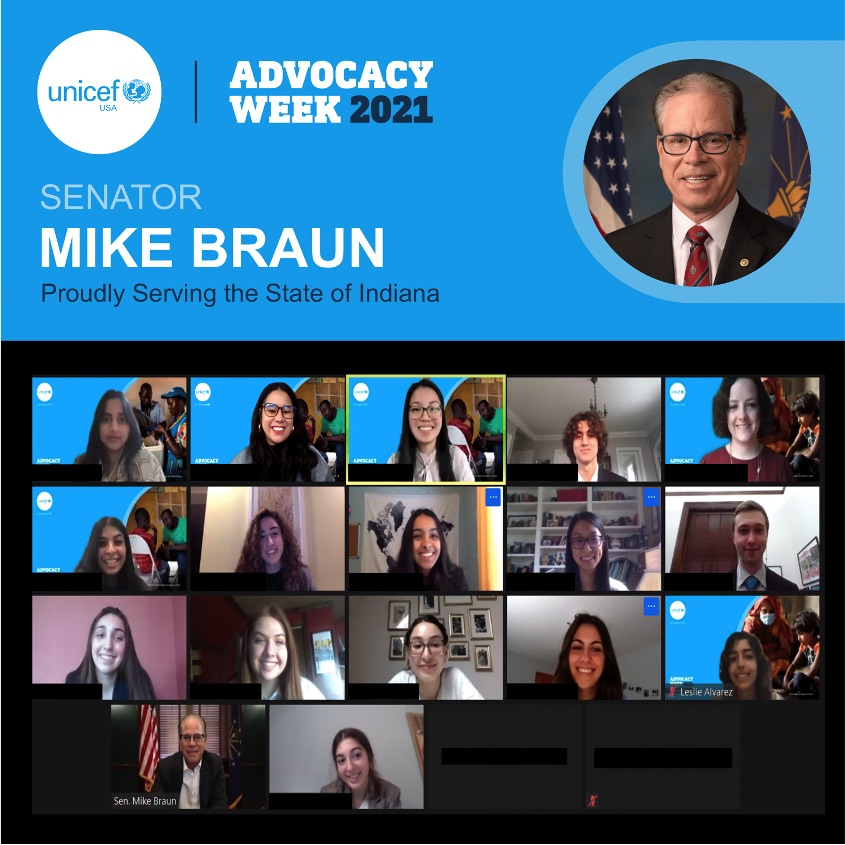 For Indiana UNICEF supporters, a highlight of Advocacy Week was meeting with Senator Mike Braun. It is rare that advocates get facetime with a Senator due to their busy schedules and large constituencies, but Sen. Braun took the time to join the 14-person, youth-led Indiana delegation, who shared their powerful personal experiences with UNICEF. The advocates made strong global-to-local connections between UNICEF’s lifesaving work worldwide and the needs of children in the Senator’s home state of Indiana, which resonated with him and his staff.

This Advocacy Week meeting enabled Indiana supporters to build on their relationship with Sen. Braun’s office, following a meeting with his staff in August 2020. Having the chance to speak with the Senator directly reflects the strong impression left by UNICEF advocates, the opportunities made possible in the virtual space and the resonance of UNICEF’s message and mission.

The success of UNICEF USA's Advocacy Week 2021 would not have been possible without the dedication and passion of UNICEF advocates on the ground across the United States. To join them in advocating on behalf of the world’s children, sign up for UNICEF USA’s grassroots volunteer program, UNICEF UNITE. To raise your voice digitally, check out the UNICEF USA Action Center, where you can write or tweet your members of Congress in support of UNICEF’s legislative priorities with one click.