Shaken But Holding On: Finding Geeta’s Future in Post-Earthquake Nepal

UNICEF has overcome so many obstacles, delivering aid and helping to rebuild infrastructure in the Himalayan nation’s worst-hit areas so thousands of displaced children and young people can have a future to look forward to.

For 17-year-old Geeta Thapa Magar, and the six younger siblings she cares for in Nepal’s eastern Ramechhap district, the earthquake that struck the country in April of last year only added to the troubles that she and her six siblings already faced. Abandoned by her parents years before, Geeta was forced to care for her five younger sisters and a brother. And when the 7.8 magnitude quake hit her village, leaving Geeta’s home badly damaged, she moved her siblings to a nearby temporary shelter made of branches and leaves. 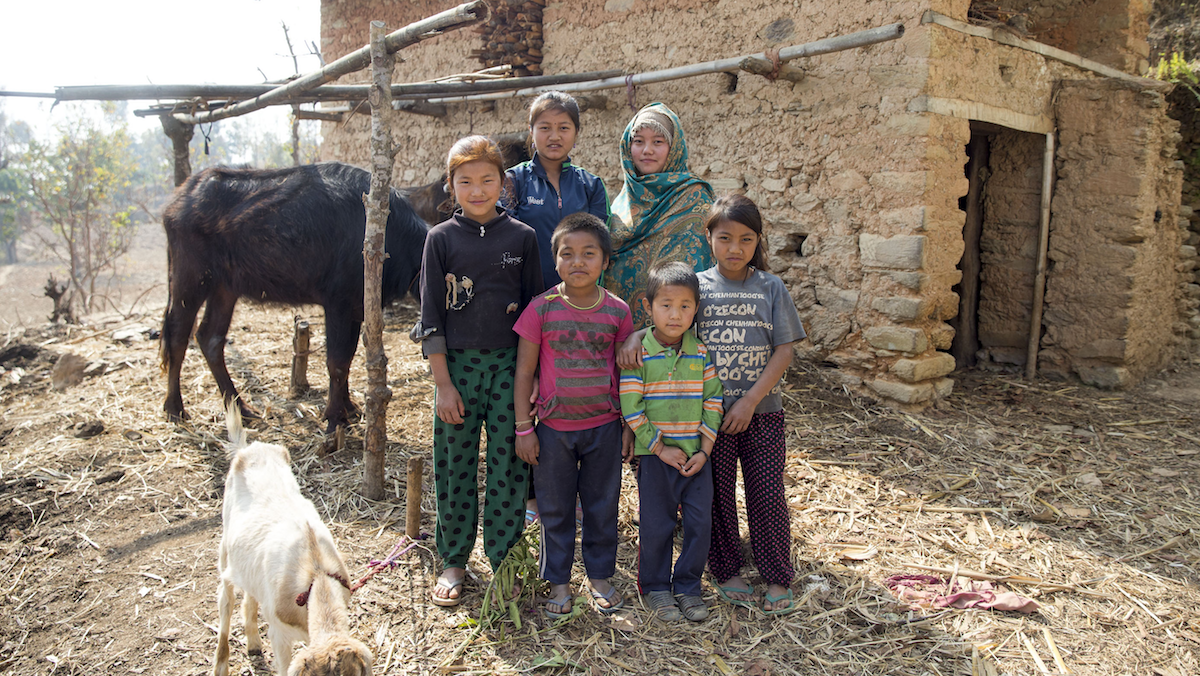 From left (front row), Magar sisters Sarita, 13, Deepa, 8, Reema, 6, and Bipana, 10, and (second row) Rita, 15, and Geeta, 17,  outside their damaged cowshed in Ramechhap, one of the 14 districts most affected by the earthquakes. © UNICEF/Shrestha

Two earthquakes, one in April and the other in May of 2015, shook the small mountain country of nearly 27 million people, killing almost 9,000 and displacing nearly 190,000. Some 2.8 million Nepalese were affected by the earthquakes, 1.1 million of them children. Mud and brick homes on the mountainsides were left in rubble, or swept away in massive landslides. Geeta’s house, atop a hill in the mountainous, richly wooded village of Puranagaun, was left cracked and sagging after the earthquakes, a relatively gentle fate compared to other homes in the area.

But by the time the earthquakes hit Nepal last spring, Geeta had already been facing tremendous challenges. Geeta’s father had left the village to work as a migrant laborer, saying he worked at a storage facility in Iraq. He didn’t call or come back until four years later, but then only to to sell off cattle and gold.

Within a year of her father's leaving, Geeta’s mother left as well, asking for her daughter Rita’s gold jewelry. “She said she would make a bigger, nicer pair of earrings for me, but she never did,” said Rita. “She probably sold off the gold to run away.”

“We didn’t know if she was dead or alive until she called us a few weeks ago and said she was working in Malaysia,” said Geeta.

We didn’t know if she was dead or alive until she called us a few weeks ago and said she was working in Malaysia.

After their mother left, Geeta had to put aside her studies to care for the younger ones. Thrust suddenly into the position of head of a household, she lost her academic balance. Around the time of her mother’s departure, Geeta was appearing for the final high school exams. "I could not concentrate,” she said, “and I flunked in five subjects."

Geeta and her younger siblings now take shelter in a tiny one-room home they constructed, colorfully adorned on the inside but with hardly enough space for all the children. Like Geeta, an estimated 26,272 Nepalis still displaced from their homes by the earthquakes live in temporary shelters. Most have been living in improvised houses made of tin, tarpaulin or materials they manage to salvage from their ruined homes. From left, Magar sisters Rita, 15, and Geeta, 17, inside the tiny one-room home they constructed in Ramechhap district's Puranagaun village.  © UNICEF/Shrestha

A Year of Challenges

In the year that has passed since the earthquakes, the intense heat, bitter cold and monsoon rains of the passing seasons have swept over the vulnerable people living in makeshift housing, like Geeta, her brother and sisters. The rains have triggered landslides, increasing the vulnerability of the population already badly affected by the earthquakes. Furthermore, active protests led to the closure of crossings on Nepal’s southern border with India for over four months, slowing the delivery of food and medical supplies.

But thousands of those put in danger by the earthquakes found hope again through UNICEF’s emergency programs. From day one of the quakes, on April 25, 2015, UNICEF was ready, releasing emergency supplies from four pre-placed warehouses in the country even before further relief began to be shipped in. UNICEF immediately suspended operations in the other districts it had been working in so that it could move its staff into the earthquake-affected zones. Then it quickly augmented its Nepal country staff with emergency professionals from around the world to help launch programs in critically important activities for children: nutrition; water, sanitation and hygiene (WASH); education; child protection; and social protection.

UNICEF worked to build close to 2,000 temporary schools, which benefitted over 179,000 kids.

To get the nearly 1 million children whose education was jeopardized by the quakes back in school, UNICEF worked to build close to 2,000 temporary schools, which benefitted over 179,000 kids.

But there’s still a long way to go for children in Nepal. The water table has been disturbed, and clean water is scarce. Countless children live and study in unsafe structures. Healthcare provision remains precarious. Further, political strife, with demonstrators taking to the streets to protest the country’s brand new constitution is slowing the country’s ability to recover from the quakes. Despite the challenges, UNICEF is stepping up to help the most vulnerable children have a more hopeful future. UNICEF’s Family Preservation Support has provided Geeta and her siblings with cash assistance, as it has done with vulnerable groups in earthquake-affected districts. The money can be used to cover household spending and to avoid cutting down on food intake when times are tough. Geeta used hers for household items, notebooks and clothes for her siblings, and used some on supplies to build a better shelter. 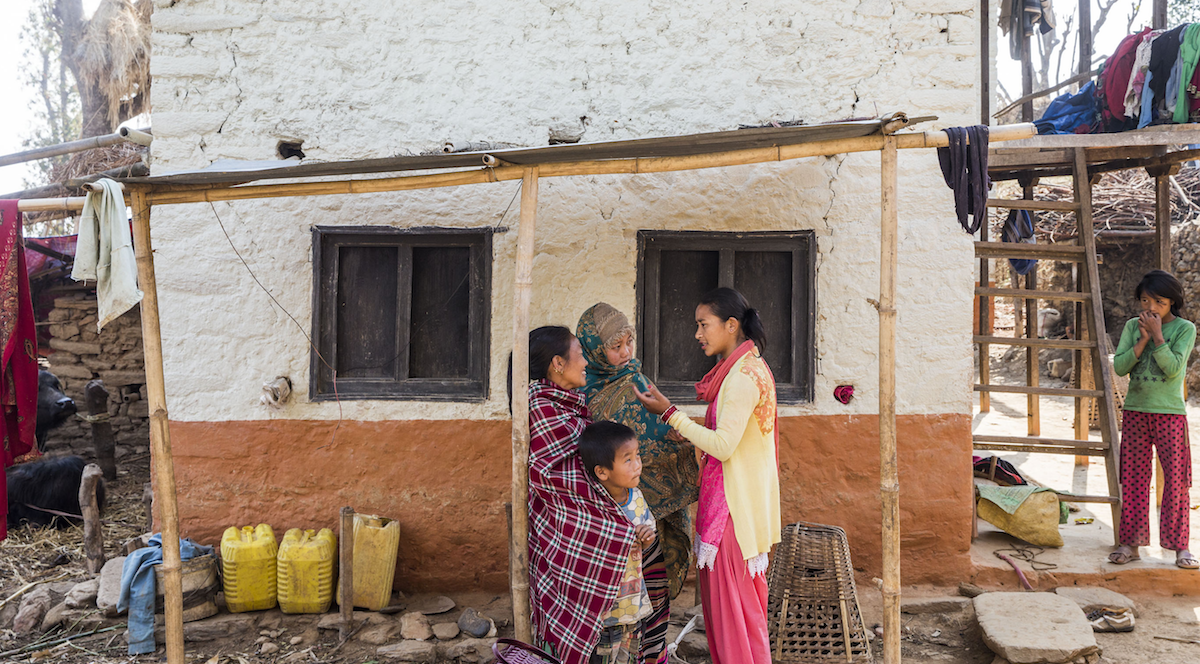 UNICEF is also working to improve the long-term economic prospects of the earthquake zone’s young people. Kabita Shrestha, a social worker in Ramechhap district who was trained by a UNICEF partner NGO and who worked with Geeta and her siblings, is helping Geeta find work.

"I have been talking to some organizations that want to train and employ Geeta on a part-time basis as a social mobilizer, and pay for her and Rita’s education,” said Shrestha.

The children can’t rely on their parents to return and take care of them. So if this alternative plan works out, they will no longer have to live in poverty and can plan for their future.

UNICEF's partner for education in Ramechhap has also been trying to figure out a solution for educating older children like Geeta and her younger sister Rita, who have dropped out of school. The sisters are in a tough situation; if they work full-time or go back to school, they won’t be able to care for their little sisters and brother or take care of the family’s cattle. But Geeta’s aunt and uncle have pledged to help, giving an extra leg up that could make all the difference. “It will be tough for the aunt and uncle. It is challenging, but with a little support the plan should work,” Shrestha said. “The children can’t rely on their parents to return and take care of them. So if this alternative plan works out, they will no longer have to live in poverty and can plan for their future.”