Faten, a mother of three, was not at home when the August 4 blast, one of the biggest non-nuclear explosions ever recorded, rocked Beirut. “My first and only thought was that my children must have been killed.”

“I ran home as fast as I could. I felt my feet moving, but it was as if I was going nowhere," recalls the single mom, whose cleaning jobs are the sole source of her family's support. "When I finally got home and saw my children were unhurt, I couldn’t take my eyes off them."

Her eldest daughter was pale and silent, her son weeping. For the next three hours, her youngest daughter clung to her.

Her children aren't the only ones who are profoundly shaken. A UNICEF needs-assessment survey has found that the children of half those polled are showing signs of trauma and extreme stress. Severe anxiety, withdrawal from parents and loved ones, nightmares, insomnia and aggressive behavior are some of the urgent cries for help Beirut's children are exhibiting.

"My eldest daughter comes to me saying, 'When will we die?'" says Faten. Her family is getting counseling and emotional support from a UNICEF-funded partner. Still,  there's no telling how long it will take for them to recover in a country that was already in the midst of a multi-layered, protracted crisis.

Lebanon's economy is in free fall. Over 50 percent of the population lives under the poverty line. School dropout rates are rising, exacerbated by COVID-19, which brought children's learning to a halt when schools shut down in March. And now this: Over 170 people are dead and more than 6,500 injured, including 1,000 children. Some 300,000 people, including 100,000 children, saw their homes destroyed.

"This blast came on top of all the suffering the people and children in Lebanon were already facing,” says Lebanon's UNICEF representative Yuki Mokuo of the blast that resulted in $3 billion worth of damage. “In my 30 years working in humanitarian assistance, I have never seen such multiple burdens placed on people.” 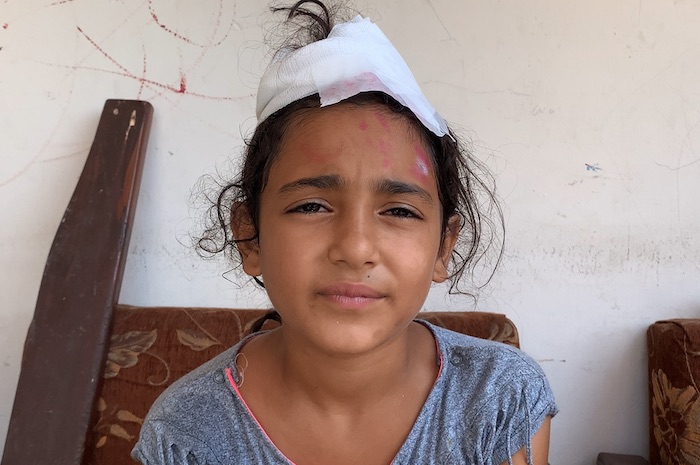 UNICEF is now working to help children, like 10-year-old Mira, who was injured in the blast. “I was showering at the time and, when the impact hit, the first aid box exploded on my head," recalls Mira. "Then the door blew off its hinges. I remember that I just started screaming. My mother ran to me, pressed hard on my wound and gave me a drink of water so I wouldn’t faint.” © UNICEF/UNI360451/El Hage

Critical water and electricity infrastructure is out of commission. With schools and at least three hospitals and medical facilities severely damaged or destroyed, a city already struggling with COVID-19 and crushing poverty desperately needs supplies to keep going.

UNICEF Inspired Gifts are one way to help. They are real, vital supplies UNICEF will deliver to Beirut's children. Things like vaccines, emergency water and hygiene kits, school supplies and personal protective gear (PPE) for the health workers who are helping families living under continual siege.

A preliminary assessment of the area within a 9-mile radius of the explosion revealed that out of 55 medical facilities, only half are fully operational, with around 40 percent having suffered moderate to severe damage. These will need full rehabilitation. The area has lost 500 hospital beds just when they are needed most.

Over the past month, coronavirus cases have spiked dramatically. In the first two days after the blast, the country reported the highest number of new cases, almost ten times the numbers seen in March. The areas around the blast are among those with the most active clusters and community transmission, but it is now extremely difficult for those affected to practice safe distancing.

Supplies and equipment are running short. Ten containers of personal protective equipment (PPE) that the Ministry of Public Health procured for the COVID response were destroyed along with five out of seven vaccine “cold rooms,” at the UNICEF-supported warehouse, which safely stores all the vaccines Lebanon's children need.

UNICEF is helping the Ministry of Public Health with essential repairs, medical equipment and the emergency supplies needed to treat the wounded and provide critical care for babies and children. But the stocks of PPE; nutritional supplies; emergency health kits, medicines, vaccines and cold chain equipment and obstetric, newborn and midwifery kits are dwindling.

The UNICEF Inspired Gifts Health and Emergency Relief Collections include many of these and other supplies that will be urgently needed in the coming months.

Displaced families in temporary shelters desperately need water, personal hygiene kits, baby kits and information on how to stay safe from COVID and other infections.

A devastating blow to water and sanitation networks

An estimated 5 percent of buildings in affected areas are cut off from the main water network. Households have no clean water for drinking and cooking, and waste management services are limited, creating a fertile breeding ground for disease. 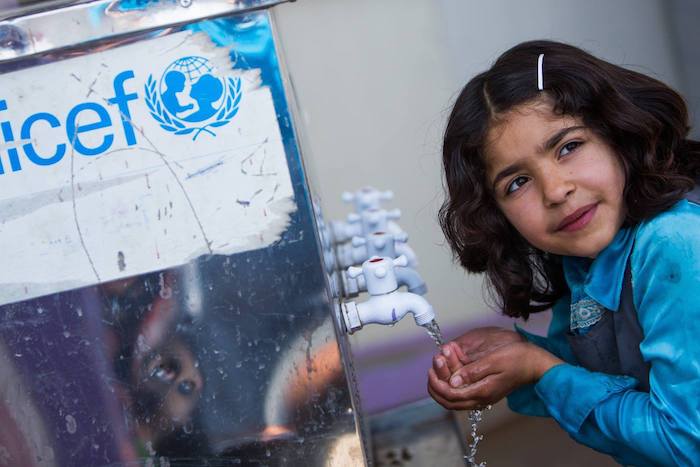 Displaced families in temporary shelters desperately need water, personal hygiene kits, baby kits and information on how to stay safe from COVID and other infections. Photo courtesy of UNICEF Lebanon.

But many families still need emergency water supplies. The Inspired Gifts water, sanitation and hygiene collection offers all the items UNICEF is now distributing to those impacted by the blast. Just $48 will buy enough purification tablets to make 40,000 liters of water safe so families, particularly children, don't succumb to dangerous waterborne diseases. For those households still cut off from safe running water, a kit containing such emergency water and sanitation supplies as a water bucket with lid, soap, detergent and reusable sanitary pads will last a family of five at least one month.

Meeting families' nutritional needs is just as crucial. The nation was already facing a food security emergency due to economic collapse. Now, a dire situation has become even more critical.

One in five Lebanese families and 33 percent of the Syrian families based in Lebanon have reported that they routinely miss meals or go without food for an entire day.

Grain reserves due to run out in less than one month

Many families had already reduced their food intake. One in five Lebanese families and 33 percent of the Syrian families based in Lebanon have reported that they routinely miss meals or go without food for an entire day. The cost of food is prohibitive. But as Lebanon imports around 80 percent of its food, the blast's destruction of the country’s main shipping port for grain means many more must do without. Lebanon's economic minister has warned that the country's grain reserves will only last "a bit less than a month."

UNICEF cash assistance programs are now helping families pay for food and other essentials, including repairs for their damaged homes, rent, medicine and travel to work or school. But Inspired Gifts nutritional supplies are needed too. Just $30 can buy a year's supply of micronutrients for two toddlers to help fortify their health and immunity during these stressful times. UNICEF is also delivering micronutrients to pregnant women and breastfeeding mothers.

Photo of a Classroom Devastated by Beirut Blast.jpg 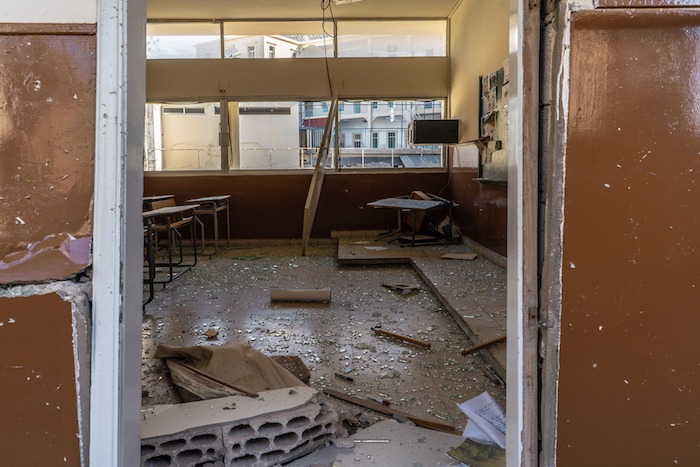 This school in Beirut's Ashrafieh neighborhood is one of 120 damaged in the blast that serve approximately 55,000 children. (Along with kids across the nation, the students of these schools had received no instruction since March, when COVID-19 brought the school year to an abrupt end.) UNICEF is delivering school supplies and learning materials, which children urgently need to make up for for lost time in the classroom. Photo courtesy of UNICEF Lebanon.

Shuttered by COVID-19, schools damaged in the blast mean kids may fall further behind

UNICEF is working to help repair damaged schools. In the meantime, children — especially those whose families are struggling financially — need learning materials and school supplies so they can regain the sense of normalcy that school offers and begin to make up for lost time.

"Getting children back to some form of learning, whether it’s partly remote and partly in situ at the schools, is going to be really important," said Ted Chaiban, UNICEF's regional director for the Middle East and North Africa, at a recent briefing. "Children need to feel like they can be with their friends and have some social activities — that are appropriately physically distant, of course — as quickly as possible."

An Inspired Gift can help. Children in Lebanon, including the many Syrian refugee kids who attend Lebanese public schools, need everything from pencils and exercise books to art supplies and math lesson materials. A gift of $210 will pay for a School-in-a-Box kit filled with enough educational supplies to keep at least 40 children learning. The Inspired Gift Education Collection also includes basketballs, jump ropes and soccer balls to help children release stress by having fun getting active. 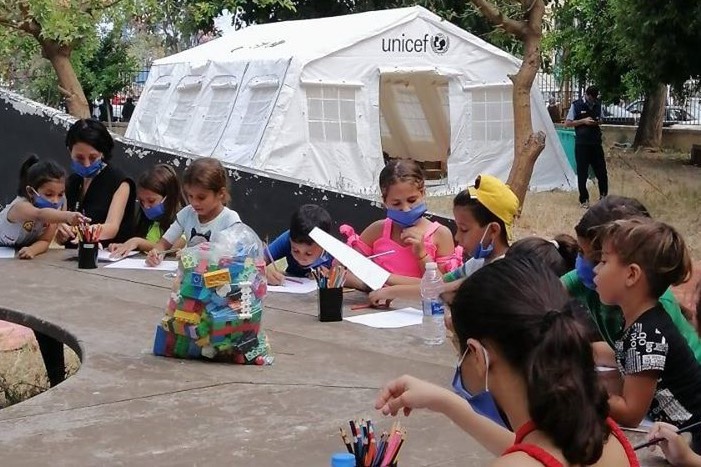 UNICEF child protection partners are providing psychosocial support to help meet the emotional and social needs of children and caregivers. After touring one safe space set up for kids, Ted Chaiban, UNICEF's regional director for the Middle East and North Africa, said: "It is great to see children being children again two weeks after the blast.” Photo courtesy of UNICEF Lebanon.

As of now, Lebanon's Ministry of Education is planning to open schools at the end of September. In addition to providing relief to those affected by this new crisis, UNICEF is hard at work preparing to push additional emotional and psychological support into the classrooms.

"In greater Beirut you have about 600,000 children, and every one of them has been indirectly impacted," said Chaiban in a recent briefing. "We are hearing about children who are waking up at night worried there will be another explosion; who are having night terrors because this is a completely shocking event. Life as they knew it in one split second changed."

Top photo: Faten, mother of three, comforts her children, who were at home without her when the August 4 explosion tore through Beirut . © UNICEF/UNI360107/Francis