Thousands of children have gone missing since civil war broke out in South Sudan five years ago. Separated from their families in the chaos of war, these children are desperate to be reunited with their parents.

As of April, UNICEF and partners have made that dream come true for the 6,000 children they've reunited with their families — some after surviving years of living apart, afraid they'd never see their loved ones again.

Working to make these family reunions possible are UNICEF-supported child protection officers like Simon Char, who employ a mix of low- and high-tech solutions to help children get back home.

"My job is to reunite these children with their families," says Char. "I'm almost like their parent because I look after them and care for them. Until I find the parents, they don't have anyone else to rely on."

Char became a child protection caseworker in 2014 because he sees restoring children to loving families as vital to the future of South Sudan. In a country where 4 million people have fled their homes to escape the violence of war, getting children back home where they belong is painstaking work.

Caseworkers like Char walk miles throughout South Sudan, interviewing families who've lost a child in hopes of finding a match with one of the children in their care. In the past, sharing information while covering that kind of ground was difficult. But now, thanks to a new app that links to a database listing the nation's child protection cases, he and the hundreds of other workers dedicated to family tracing can update and monitor information about South Sudan's missing children from their phones or tablets while they are out in the field.

"I’m almost like their father while we are looking for the real parents," says Char, who does all he can to help fill the void in their lives. “I create a special bond with these children." The children in Char's care count on him for everything from clothing and blankets to nurturing and protection. The little girl above is among the 70 children Char looks after at the United Nations (UN) civilian protection site in Malakal. Such sites, along with the UN's broader peacekeeping efforts, have saved many lives — and prevented genocide say some South Sudanese — by keeping the ethnic groups at the center of the conflict apart.

It is hoped that the years of violence are finally coming to an end, thanks to an agreement the warring factions signed in September. But the peace remains fragile. Some of the displaced in Malakal where Char works have no place to go because their homes are now occupied. With families no longer living where they once did, reuniting parent and child can often take years. "It's not easy," says Char, sitting above with an 11-year-old boy who was separated from his parents two years ago during an armed attack in Malakal. "When we identify separated children, we sit with them and ask them many questions about their parents. We take photos of them and then consult the national database."

The new app streamlines that process, allowing caseworkers more time to look for families — and help kids cope. The app has also launched a handbook that helps case managers like Char assess the data they collect and ensure the continuity of support for all lost children in the registry, many of whom are traumatized or need specialized services to recover.

“The handbook has the power to change children’s lives,“ said UNICEF South Sudan Deputy Representative Andrea Suley. “Caseworkers are often on their own in some of the most remote and dangerous areas in South Sudan." With improved connectivity and real-time access to guidance for managing their work, protection officers like Char can now work more quickly to get the lost children of South Sudan back home.

In April, UNICEF and partners celebrated the reunion of a 17-year-old girl with her parents in Bentiu. The teen, who was separated from her parents during an armed attack in Bor four years ago, was the 6,000th child to be reunited.

These are the moments Char — and the children in his care — live for. 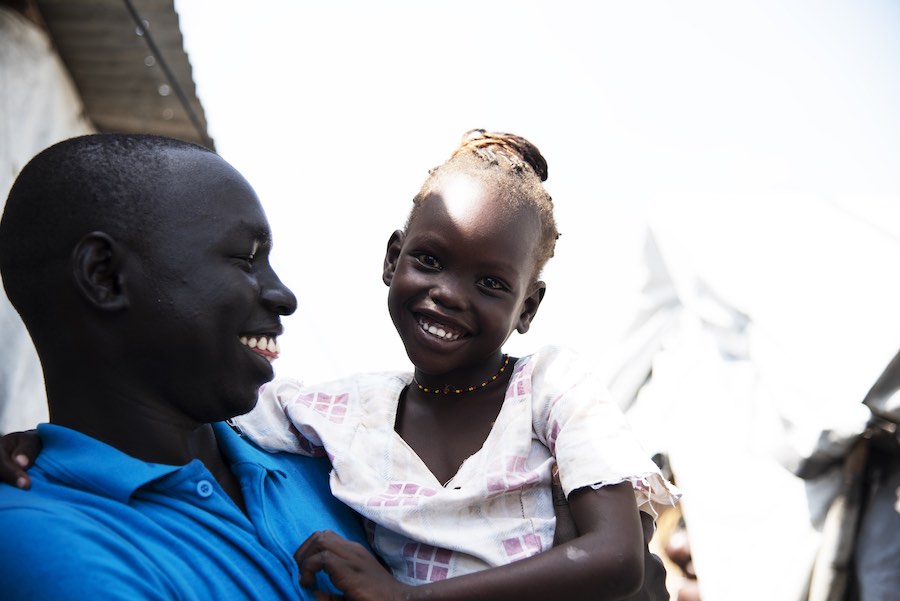 “The best part of my job is when I see the reunited family happy and smiling together as a result of the miracle that just happened," says Simon, here with a 5-year-old girl whose parents he located after four long years. “I’ve told her that she will soon be with her family and she is very excited.”

Protection officers like Char are doing everything they can to help the 8,000 children who are living on their own get back home.

But reuniting lost children with their families is just one facet of UNICEF’s comprehensive program to help South Sudan’s children recover from the brutality of war.

HERE ARE SOME OF THE WAYS UNICEF HELPS …

Children recover from the trauma of war:

Please help UNICEF and partners reunite the missing children of South Sudan with their families.

Top photo: UNICEF caseworker Simon Char is with an 11-year-old boy who has been separated from his family for four years. “There are rumours that his father is alive, but until we have located him, we don’t really know," says Char. All photos © Helene Ryeng for UNICEF