A Refugee Father Leaves Violence Behind in the DRC

Ten years ago, Dieu-Merci Matala arrived alone in South Africa, an asylum seeker fleeing from conflict and insecurity in his home country of the Democratic Republic of Congo (DRC). "At first, I couldn't speak any English. Those days were so difficult," says Dieu-Merci, now 44.

Dieu-Merci holds a law degree; he was an assistant prosecuting attorney in the DRC before he was forced into exile. His wife, Bibiche, and their infant daughter, Fortune, remained behind, waiting anxiously for news. Bibiche "only knew I was alive because a friend saw me at the [Zimbabwe/South Africa] border and told her when he got back to Congo." 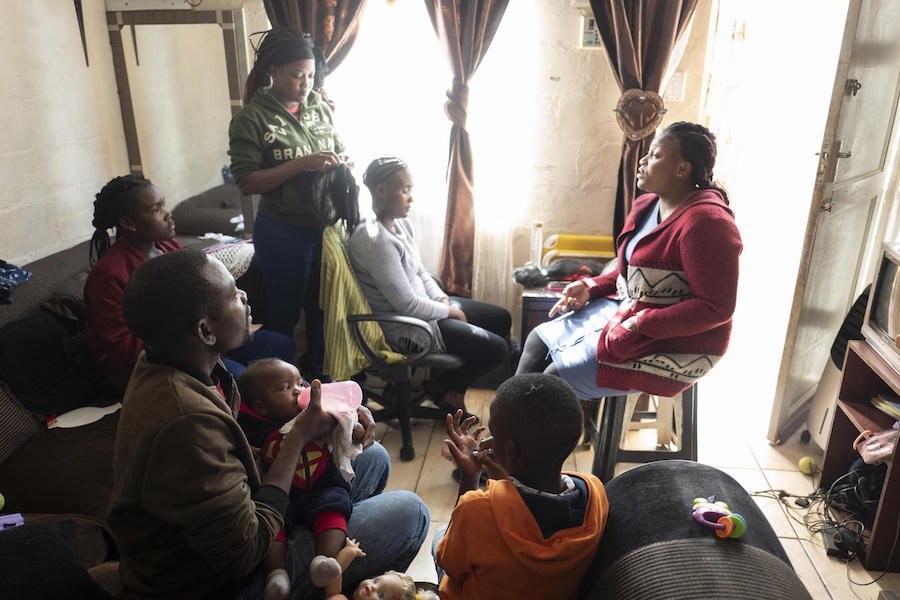 Four months after he arrived in South Africa, Bibiche and Fortune joined him. In 2014, the family received formal status as refugees and are now poised to apply for South African citizenship. The family lives in a small, rented apartment in Cape Town. Bibiche (standing, above) runs a hairstyling business in their crowded living room. Fortune, now 11 (above left, seated on couch) helps her parents look after her three younger siblings: David, 7, Joshua, 4, and 7-month-old Grace. 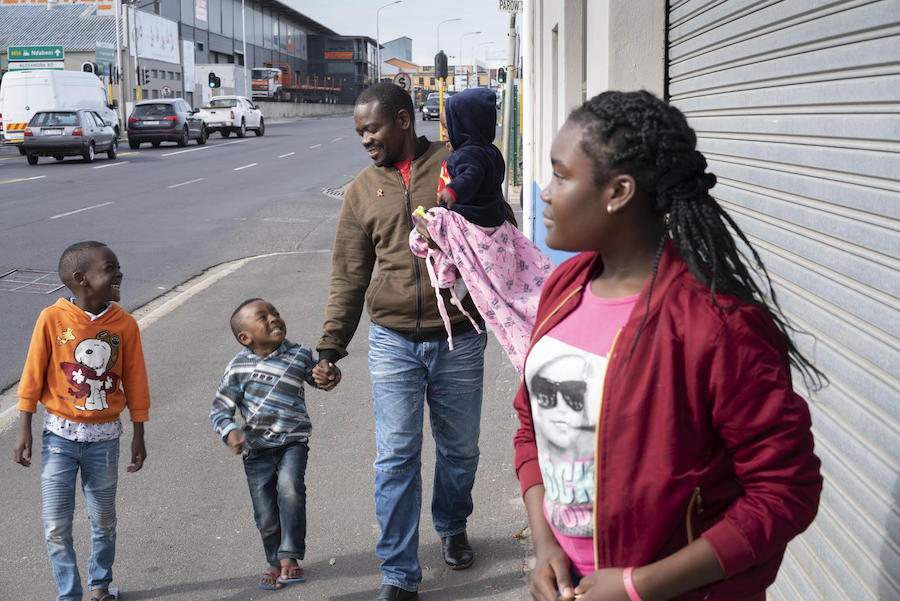 Dieu-Merci works as a fireman for First Watch, a firm contracted by the De Beers diamond coporation. He works 12-hour shifts — sometimes during the day, sometimes overnight‚ at a ship repair facility located on the Transnet harbor in Cape Town. "Sometimes there are long gaps between contracts with First Watch, so I spend a lot of time at home with the kids," he says. 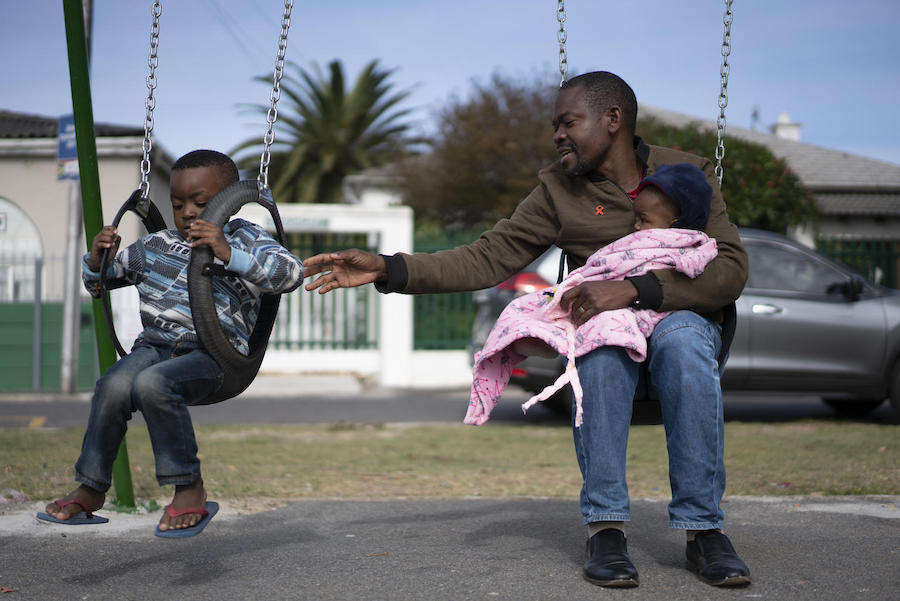 "The most important thing about being a father is your presence," says Dieu-Merci. "You don't have to be there 24 hours a day, but children need to feel your presence. When you go to work, they need to know that you'll be back — that daddy isn't going away for good. My father loved us, but we weren't close, or friends. We had to keep our distance. We were close to mama, but when papa came home, we were all quiet." 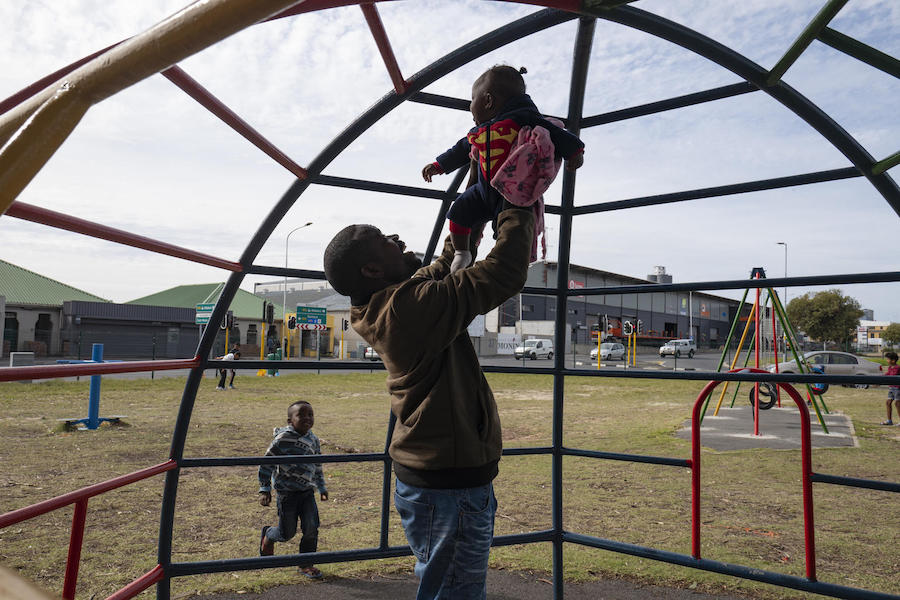 "I believe that distance causes a not-close relationship. I try to make it very friendly so that they trust me and feel free to tell me anything. If a child sees daddy as a friend and doesn't feel shy, they're more likely to listen to you.

"The system that we learned from our parents and elders was one where only the mother was the caregiver. It was the system of patriarchy. It said that the man was there to provide, and he held power over his wife and family. But that's changing, because of education. People now know that we need to make it 50/50." 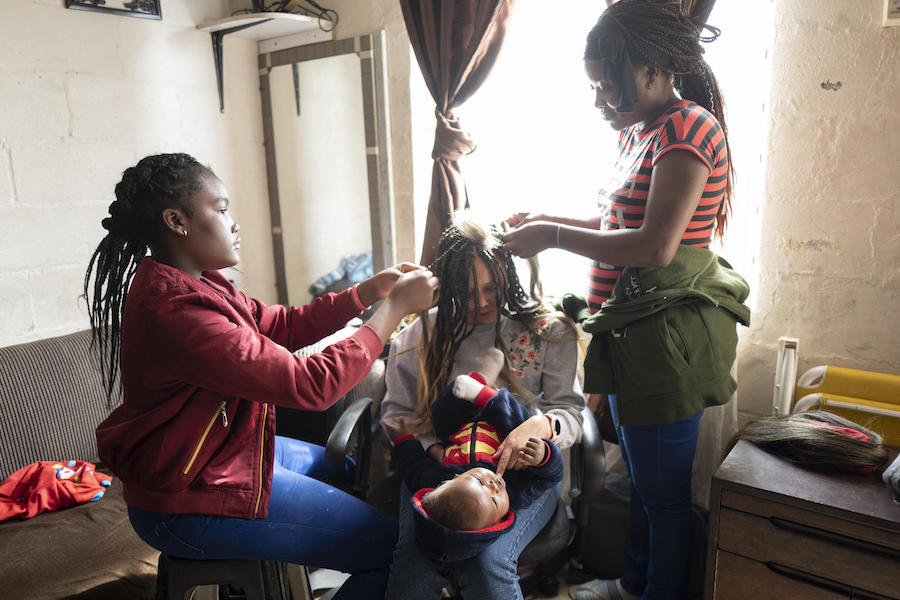 Bibiche earns a large portion of the family's income, working for an NGO providing support to fellow refugee families and running several small businesses: braiding hair (above, her daughter Fortune helps), and designing and making clothes and wigs. On days when both parents are working, the younger children attend an informal day care center run by a neighbor while the older children are in school. 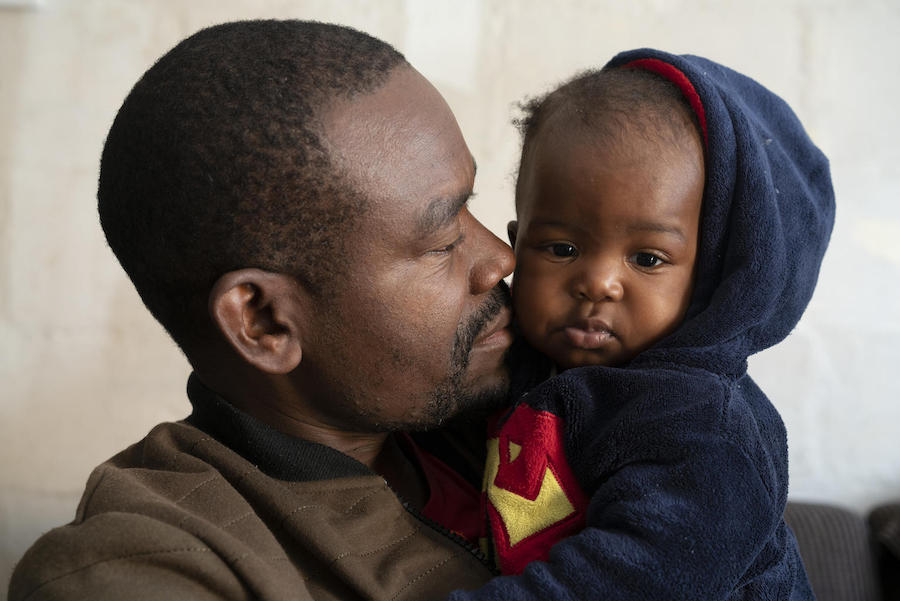 Dieu-Merci volunteers with Sonke Gender Justice, an NGO partnered with UNICEF. As a participant in the MenCare program implemented by Sonke, he has received extensive training on how to be an involved, nonviolent father and caregiver — a radical departure from his own childhood.

"When we grew up, we learned that if a child does wrong, the child will be punished — and not just by their own parents," he recalls. "Any adult would punish any child. If an adult saw you doing something they thought was wrong, they would beat you, then bring you back to your parents, who would say to them, 'Thank you very much. You did good.' The way to educate a child in the community was through beatings." 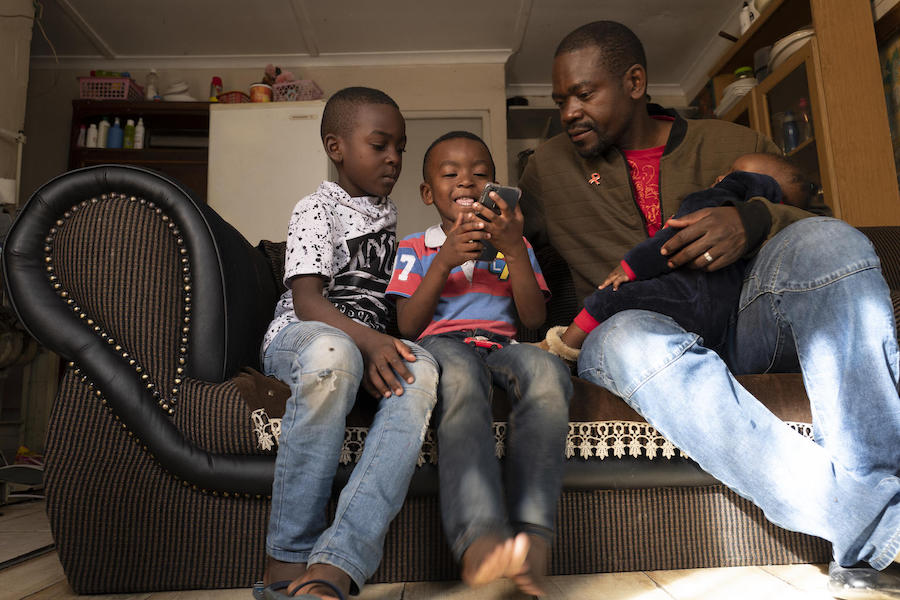 Dieu-Merci is determined to raise his children with love and respect instead of fear and intimidation. "You have to find a way to educate kids without the use of violence," he says. "You have to know that they are human beings and to respect their human rights. MenCare shows fathers how to deal with their own problems, so we don't take them out on our families. It teaches you how to manage your situation and stay in a peaceful relationship.

"When you beat a child, the information goes straight out of their head. They don't remember what you're trying to teach them. But if you talk to them and their mind is quiet, they'll understand and learn the lesson. It's important to be a good role model. The children of today will also be parents. What they learn from watching you, they will apply in their own time — and shape tomorrow's society." "I want a stable life for my children," says Dieu-Merci, "and I want to see them reach their dreams. My eldest says, 'One day I want to be known as Dr. Fortune,' and David wants to be an engineer on big construction sites."

The most challenging aspect of parenting, he says, is having to do things that you may not like — "accepting any kind of job that comes your way and allows you to provide for your family and make a good foundation for them. Being a father who really wants to be there for his family, you don't fold your arms and wait for break to fall from heaven. You have to get up and go look for it."

This Father's Day, help UNICEF protect children around the world by making a donation in your dad's name and sending him a personalized e-card.

Top photo: In May 2019, Congolese refugee Dieu-Merci Matala, 44, holds his infant daughter, Grace, near the Transnet harbor facility where he works in Cape Town, South Africa. All photos by Brian Sokol for UNICEF