Queer During Quarantine: A Spotlight on LGBTQ Youth Mental Health

In honor of Pride Month, UNICEF USA renews its longstanding commitment to ending discrimination and abuse and issues an important reminder that LGBTQ children deserve protection and equitable access to mental health services.

Children exposed to conflict, disasters and other humanitarian crises can suffer severe psychological and social consequences. Amidst the backdrop of a continuing pandemic and a growing global death tally that underscores the worsening divide between rich and poor countries, this year’s Pride Month highlights the unprecedented strain COVID-19 has placed on the mental health of the world's children and youth, particularly those most vulnerable, like lesbian, gay, bisexual, transgender, queer & questioning (LGBTQ) children.

Globally, mental health is being challenged like never before as the pandemic affects all parts of our societies. UNICEF knows that anxiety, depression and other stress-related problems threaten a child's ability to grow up healthy and happy. Failure to address mental health and psychosocial issues can stall children’s development and bar them from opportunities to participate meaningfully in society. That is why UNICEF works to provide mental health and psychosocial support to children affected by crisis and conflict.

The stresses of the pandemic fall disproportionately on the most vulnerable, including LGBTQ youth

Research — including UNICEF's own reports from programming in countries such as Brazil and Bangladesh — has shown that LGBTQ children are already particularly vulnerable to threats to their safety and well-being: they are more likely to be the target of violent attacks; more likely to be bullied at school or otherwise harassed, stigmatized and socially excluded; and more likely to be isolated and abandoned by parents and peers. LGBTQ youth who are rejected by their families experience disproportionate levels of suicide, homelessness and food insecurity. That is why UNICEF and other UN agencies call for an end to violence and discrimination against LGBTQ adults, adolescents and children.

Do you have questions about the various identity terms within the LGBTQ community? Watch this child-friendly video for more information. To learn about the stigma of mental illness that has long been associated with LGBTQ sexual orientations and gender identities, check out these resources from the American Psychological Association.

According to the National Alliance for Mental Illness, lesbian, gay and bisexual youth are more than twice as likely to report experiencing persistent feelings of sadness or hopelessness than their heterosexual peers. Transgender youth face additional disparities as they are twice as likely to experience depressive symptoms, seriously consider suicide and actually attempt suicide compared to cisgender lesbian, gay, bisexual, queer and questioning youth. Further, the intersection of identities for Black LGBTQ youth create compounding vulnerabilities for experiencing mental health concerns like depression and suicidality. These risks are further heightened in conflict and crisis settings, such as the current COVID-19 pandemic, which has reproduced and exacerbated the patterns of social exclusion and violence already experienced by LGBTQ persons.

To help address these concerns, the United Nations (UN) Independent Expert on Sexual Orientation and Gender Identity recently called on UN member states and other stakeholders to ensure that government responses to COVID-19 are free from violence and discrimination. To aid governments in doing this, the Independent Expert released the ASPIRE Guidelines, measures that elected officials can take to ensure equitable protection for LGBTQ populations throughout the pandemic. 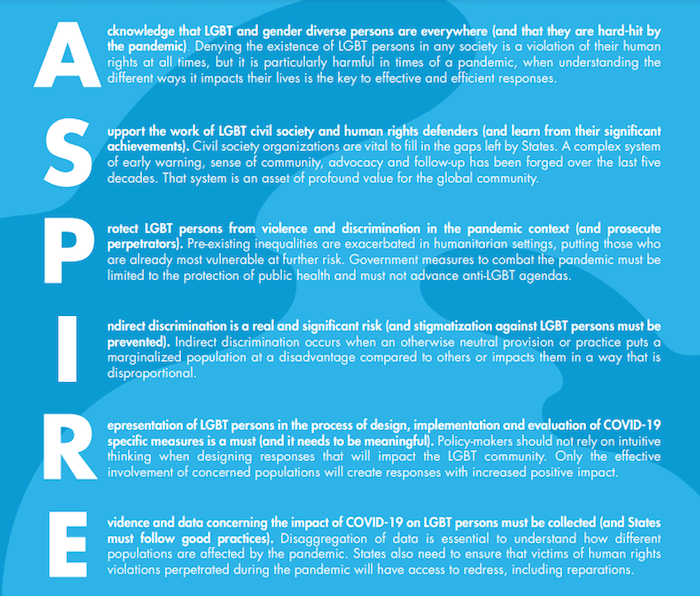 State legislatures across the country have introduced a record number of anti-transgender bills in 2021, many targeting trans youth

Sadly, these guidelines haven’t yet become the reality for many within the LGBTQ community. Here in the United States, 2021 has seen the highest number of anti-transgender bills introduced in state legislatures in U.S. history, many of which target trans youth.

UNICEF USA has noted with alarm the growing number of these proposals, such as the recently passed law in Arkansas, making it the first U.S. state to prohibit physicians from providing gender-affirming treatment and care to trans youth. Other legislation prevents trans youth from participating on sports teams consistent with their gender identity. Despite the obvious impacts these bills have on the liberties and freedoms of LGBTQ youth, it cannot be underestimated how much these challenges take a toll on young LGBTQ peoples’ mental health and well-being as well.

As a UNICEF family, we are proud of our work to contribute to the development of a UN-wide strategy and guidance to end and prevent all violence and discrimination against LGBTQ people, everywhere. Our programming has always sought to serve each and every child and young person in need — without discrimination — and we are committed to joining our sister agencies in this work. — UNICEF Executive Director Henrietta Fore

Especially during times of great hardship, UNICEF believes that legislators make better decisions when children and youth are meaningfully engaged in the policymaking process — and this year has provided unprecedented opportunities for youth voices to shine. Voices like that of 10-year-old activist Kai Shappley, who testified in front of the Texas Senate Committee on State Affairs in April against two anti-trans bills in the state legislature.

At the federal level, Stella Keating became the first transgender teen to testify before the U.S. Senate. Overseas, Kai and Stella are joined by Bulgarian activist Martin Karadzhov, who became the first LGBTQ young person selected for the 2020 class of Young Leaders for the Sustainable Development Goals, tasked with activating millions of young people in support of the UN 2030 Agenda. While their individual speeches and social contexts may differ, Kai’s, Stella’s and Martin’s core messages are strikingly similar: treat LGBTQ children like just that, children.

Protecting the mental health of LGBTQ youth: strategies for teenagers and their parents

Are you the parent of a LGBTQ child or a LGBTQ young person yourself? Check out these strategies for how teenagers can protect their mental health during the coronavirus pandemic and these tips about how to stop cyberbullying. If you’re feeling lonely, anxious or afraid, you’re not alone. Through UNICEF's Voices of Youth platform, you can discover stories, illustrations and messages of support shared by young people around the world.

Utilizing a child rights-based approach in its work, UNICEF USA believes that all children have a right to a happy and healthy childhood, free from discrimination and safe from harm. We join other U.S. organizations including the American Academy of Pediatrics and American Psychiatric Association in decrying the stigmatization and marginalization of LGBTQ youth. Any law that targets children based on their sexual orientation or gender identity and expression fuels discrimination, stigma and violence against children and adolescents. Such discrimination can lead to lifelong impacts on education and physical and mental health. This is why everyone has a role to play in advocating for inclusive mental health services for youth during the COVID-19 response and recovery and proactively engaging marginalized groups in the process: UNICEF and other UN organizations, governments, community and religious leaders, the private sector and civil society.

UNICEF advocates for the rights of LGBTQ children and adolescents to grow up free from discrimination, stigma and violence

Not only during the month of June but year-round, let us remember and acknowledge that the first Pride was a protest — led by some of the most marginalized in the LGBTQ community, trans people and queer people of color. The modern-day fight for LGBTQ justice in this country was built on the shoulders of these change makers. UNICEF USA stands with those working to end all forms of violence and discrimination against LGBTQ children and youth and unwaveringly supports UNICEF's continued equity and inclusion work to strengthen protections for vulnerable children around the world.

Now more than ever, we need to ensure children have access to mental health services, particularly the most vulnerable like LGBTQ youth of color. Urge Congress to pass the Mental Health Services for Students Act.

If you are a LGBTQ young person and thinking about suicide and in need of immediate support, please call The Trevor Project’s TrevorLifeline at 1-866-488-7386 or click here for live online chat or text with a trained counselor.