One Girl Leads the Fight against HIV/AIDS

AIDS is the number one cause of death among African adolescents, but UNICEF and UNAIDS are working toward an AIDS-Free Generation by 2030.

"Like millions of children around the world, I was infected with HIV at birth," explains Mani Djelassem Virgille, a 16-year old HIV/AIDS activist in Chad.

Recently, she flew to Addis Ababa, the capital of Ethiopia, to urge a conference of “first ladies” of African countries to strengthen programs for the treatment and prevention of HIV/AIDS in adolescents.

Click on the video above to learn more about Mani Djelassem Virgille, a 16 year-old in Chad who has become an outspoken advocate for other teens like her living with HIV. ©UNICEF

Mani was lucky; she was tested for HIV and treated with anti-retroviral medications.  But the odds weren’t in her favor, according to the just released 2015 Statistical Update on HIV and AIDS among Children.

In sub-Saharan Africa where Mani lives —  the region of the world with the highest HIV infection rates — girls are at highest risk, accounting for 7 of every 10 new HIV infections among 15-19 year olds.

"I don't want any more children to be born with the HIV virus like me." — Mani, 16-year old HIV/AIDS activist

Just as it was for many other children, Mani’s discovery of her HIV status was painful.  “I’d ask my father why I was taking medication all the time. It was in the youth center that they informed me I was infected by the virus."

Mani pauses, chokes up and knits her brow.  After a moment, she recovers.  "It was difficult.  Let's just leave it at that,” she says quietly.

But Mani is determined to help others. "I don’t want any more children to be born with the HIV virus like me,” she says.  “I also want to help prevent new infections among youth.  I've committed myself to do my best…”

Her goal is a challenging one.  An estimated 34 million people have died from AIDS-related causes since the epidemic began, including about 1.2 million in 2014.  Today, nearly 37 million people worldwide are living with HIV.

An Update on the Fight for an AIDS-Free Generation

Due to HIV testing and care for HIV-positive mothers, Queen and her daughter Neo are living happy and health lives in South Africa. © UNICEF

That’s why, on World AIDS Day 2015, UNICEF and UNAIDS are asking everyone to follow Mani’s lead and redouble the fight for an AIDS-free generation.

“The number of lives saved thanks to the HIV and AIDS response in this century is remarkable,” says UNICEF Executive Director Anthony Lake.

"We must do more, and do it faster than ever.  That's the only way to achieve an AIDS-free generation." —UNICEF Executive Director Anthony Lake

“But for the sake of the children and adolescents still affected, and for all future generations, we cannot mistake advancement for attainment.  We must do more, and do it faster than ever.  That's the only way to achieve an AIDS-free generation.”

UNAIDS Executive Director Michael Sidibé concurs: "We have bent the trajectory of the epidemic.  Now we have five years to break it for good or risk the epidemic rebounding out of control.”

Only 15 years ago, an HIV diagnosis was tantamount to a death sentence for most children and their families in low-income countries. But today, early diagnosis and the right treatment can ensure long healthy lives and prevent the transmission of HIV to others.

What has this meant worldwide?  “Since 2000, 30 million new infections were prevented, nearly 8 million deaths averted, and 15 million people living with HIV are now receiving treatment,” UNICEF and UNAIDS report. 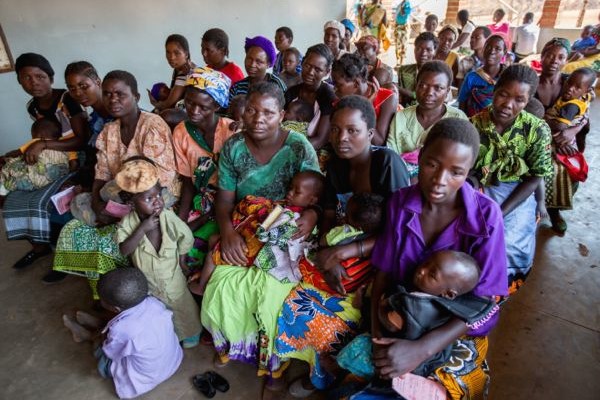 A group of mothers and their children wait in a UNICEF-sponsored clinic in Malawi for HIV testing and care. © UNICEF

For mothers and children, this is particularly good news. Today, a majority of pregnant women living with HIV in low- and middle-income countries receive treatment to remain healthy and prevent HIV transmission to their babies—preventing 1.3 million new infections among children since 2000.

HIV/AIDS Still Hurts Too Many Children

There’s still a lot more work to do.  Every hour, worldwide, 20 children (0–14 years old) are still infected by HIV.  As a result, an estimated 2.6 million children are currently living with HIV.  Most live in sub-Saharan Africa and were infected by their HIV-positive mothers during pregnancy, childbirth or breastfeeding.

For HIV-positive teens like Mani, the majority of AIDS-related deaths are among those who acquired HIV as babies, but never learned of their status or didn’t receive lifesaving treatment.

Those most at risk of new HIV infections—including girls, young men who have sex with men, transgender teens, intravenous drug users, or the sexually exploited—lack access to proven infection prevention programs, too.

What Does an AIDS-Free Generation Mean? 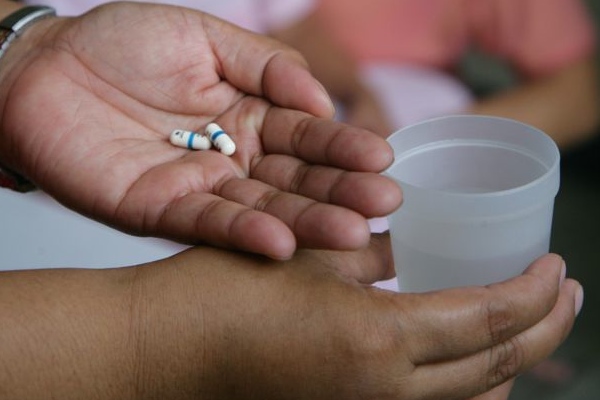 A healthcare worker in Manila, Philippines, holds lifesaving antiretroviral medications and a glass of water.  © UNICEF

What does an AIDS-free generation mean?  That question has many answers.

"It means that every child is born free from HIV, and that they and their mothers not only survive but thrive." — UNAIDS Executive Director Michael Sidibé

First and foremost, as UNAIDS’ Sidibé explains: “Ending the AIDS epidemic means that adolescent girls and young women have access to education and appropriate HIV and sexual and reproductive health services. It means key populations, such as people who inject drugs and transgender people, have full access to health services delivered with dignity and respect.  And it means that every child is born free from HIV, and that they and their mothers not only survive but thrive.”

But, Sidibé warns: “We still have 22 million people without treatment, and their lives are hanging in the balance.”

Stopping the HIV/AIDS epidemic has other meanings, too.

For Mani, there’s a personal dimension far beyond survival.  At the end of her UNICEF video profile, she shyly reveals that, “When I grow up, I want to be a journalist because they get to travel a lot and they get to discover new countries.”

Without access to HIV prevention, testing and treatment, Mani and all the children and teens around the world like her won’t live to pursue their dreams. That’s why the fight for an AIDS-free generation represents a victory all of us will benefit from, wherever we live and whatever our HIV status.

On World AIDS Day 2015, it also gives each of us a very good reason to join the fight against HIV/AIDS. First observed in 1988, World AIDS Day gives each of us the opportunity to unite in the global fight against HIV/AIDS.

The U.S. Fund for UNICEF asks you to join in the fight for an AIDS-free generation around the world. Support UNICEF's HIV/AIDS programs.