A new report shows that thousands of young people fleeing violence and poverty in sub-Saharan Africa are being abused, exploited and arbitrarily detained in Libya.

A new report from UNICEF and the Institute for Migration analyzes the journeys of young refugees and migrants on routes to Europe. It shows that, especially on the route from  sub-Saharan Afria to North Africa to Italy, children and young people, often travelling alone, are being abused, exploited and trafficked on their harrowing journey. The report highlights factors that affect the vulnerability of young people, such as national origin, level of education, the route taken and the length of the journey. Help is hard to find when crossing an area in crisis. Those who could be looked to for protection can turn out to be perpetrators: smugglers and traffickers, border guards, militias and police. Read the report here.

The Central Mediterranean route from North Africa to Europe is "among the world's deadliest and most dangerous migrant routes for children and women," said Afshan Khan, UNICEF regional director and special coordinator for the refugee and response crises in Europe. "The route is mostly controlled by smugglers, traffickers and other people seeking to prey on desperate children and women who are simply seeking refuge or a better life."

Vulnerable young migrants are being abused and trafficked

Thousands of adolescents and young people set off each year across the desert to the shores of Libya. Once there, they hope to cross the Mediterranean into Europe. Few are able to access a government-approved way of doing this; instead, they depend on smugglers. 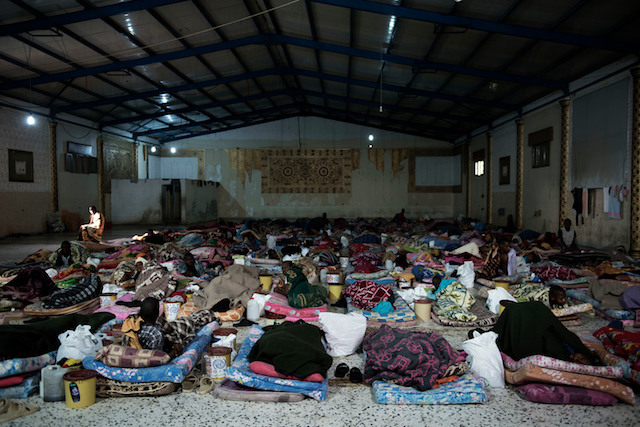 Up to 720 people at a time are held in this detention center formerly used as a dining hall for weddings. © UNICEF/UN052825/Romenzi

Much has been made of the extreme dangers faced at sea. But many don't even get to sea; they are stalled in a miserable Libyan detention center, where they are beaten, sexually abused, and indefinitely detained —sometimes for ransom — in crowded, unhealthy conditions with inadequate nutrition and sanitation. Libya is a fragile state riven with violence, but its lawlessness also makes it a place where a migrant might find a way to get on a boat to Europe.

More than three-quarters of the refugee and migrant children interviewed by UNICEF for the recent report said they have experienced brutality or harassment at the hands of adults at some point during their journey, while nearly half the women interviewed reported sexual abuse along the way — often more than once, at multiple locations.

Over 90 percent of migrant children who arrived in Italy in the first half of 2017 were considered unaccompanied. These children are especially vulnerable to exploitation and abuse.

On the Central Mediterranean route, over 80 percent of young people from sub-Saharan Africa reported exploitation, compared to about 55 percent of those from elsewhere. Other factors, like education or traveling companions, don't count for as much as the region of origin. Accounts from migrants suggest that racism is having an effect. On the Eastern Mediterranean migration route, sub-Saharan Africans were four times as likely as others to report having been exploitated. 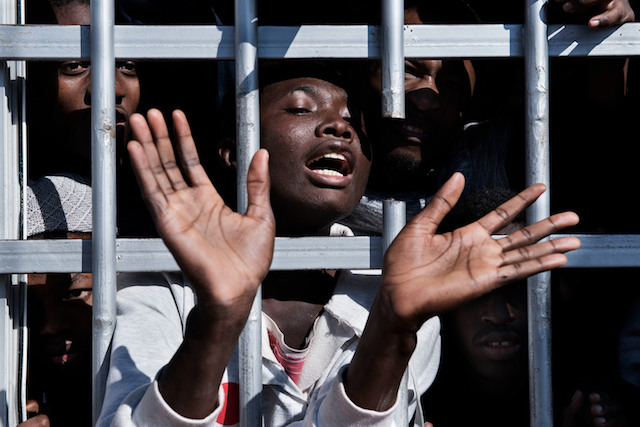 Migrants who are held in cells said they are rarely allowed out. "The government does not give us the money to pay salaries and to pay those who bring us food," said detention center manager Abdalhamad Altunisa. "So often we do not have enough food or drinking water. This winter was particularly cold and in recent weeks 15 migrants froze to death." © UNICEF/UN052608/Romenz

Security is precarious and violence is commonplace in Libya. Militia groups control border crossings and hold migrants for exploitation in unofficial detention centers that are "no more than forced labor camps... and makeshift prisons," according to an earlier UNICEF report." For the thousands of migrant women and children incarcerated, they were living hellholes where people were held for months at a time... in squalid, cramped conditions."

Such experiences, on top of the trauma of what they are escaping back home, contribute to mental health problems that persist long after the journey is over.

UNICEF visited a detention camp in Libya, where 15-year-old Jon shared his story. After his parents were murdered by Boko Haram militants, Jon fled Nigeria and headed north in search of safety. When UNICEF spoke with him, he had been living in a crowded, dangerous Libyan detention facility for seven months.

"They beat us," said Jon. "They think of us as if we are slaves. They flog us with a pipe. We are always inside the room. We never come out. People are dying. Many are dying in this place."

Aza, jobless and unable to feed her children, left Nigeria in search of work and a better future for her family. For five months, they lived in the Sabratha detention facility.

"In Sabratha, they used to beat us every day.... They beat babies, children and adults. There was no food and no water," Aza's nine-year-old daughter Kamis recalled. "Before we left Nigeria, I told my mother, 'I want to be a doctor.' My mother answered, 'Don't worry. When we reach Italy, you will be a doctor.'"

When UNICEF met with the family, they were still trapped in a Libyan detention center.

Lacking a safe pathway for a journey that is necessary for their survival, migrants are driven to interact with criminals, at great risk to themselves. The likelihood of being detained, exploited or abused (or all three) depends on various factors, including where you are from and what route you take. But the likelihood is far too high.

The risk can be reduced if we address the causes that lead adolescents and young people to leave home, ending conflict and violence, poverty and lack of education and livelihood on the other. Those who have to leave home need safe and regular pathways that families can travel together.