A World Water Week success story: with a two-year improvement project completed, UNICEF and partners are able to turn on the tap for 40,000 people in need.

Over 2 billion people in the world lack access to safe drinking water, and 4.2 billion are without sanitation services. The changing climate is destroying, drying up and contaminating water sources — leaving hundreds of millions of children vulnerable.

Such is the case in Southern Madagascar, where water shortages due to prolonged drought are particularly acute, and many families have long struggled to get by. Lack of safe water also increases the risk of disease. Globally, about 700 children die every day from diarrhea linked to unsafe water, sanitation and hygiene.

So when the taps recently turned on for 40,000 people in the region, there was reason to celebrate — the result of a two-year collaboration between UNICEF and the Government of Madagascar to enable household access in village communities where fetching water from faraway or from unsafe sources had become commonplace. A girl taps into her community's new source of safe drinking water, delivered over an upgraded pipeline that officially opened in June 2019, serving over 40,000 people. With support from UINCEF and other donors and partners, and in collaboration with the Government of Madagascar, families living in nearly two dozen remote localities will benefit from the new access points. © UNICEF/UN0325520/Ralaivita

"So long to the chocolate-colored water from before," a man named Beamby from Marovato village told UNICEF Madagascar's Fanjaniaina Saholiarisoa Alida, who reports on the project's local impact here. 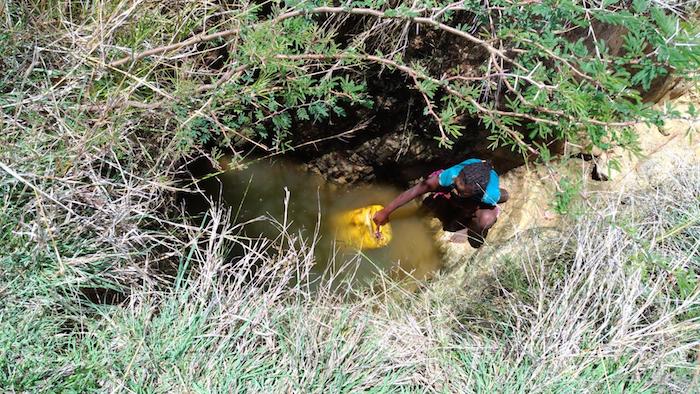 Infrastructure upgrades supported by UNICEF, including a new 112-mile pipeline serving 19 community access points, provides an alternative for families in Southern Madagascar who often had to rely on unsafe sources, such as the one pictured above. © UNICEF

UNICEF also works with corporate partners to bring safe water, sanitation and hygiene to communities that have long had to do without. S'well, a re-usable bottle company, has committed $1.4 million since 2017 to help UNICEF extend its WASH programming in Madagascar to even more families and children.

Together, UNICEF and its partners are looking for innovative ways to remove the barriers that restrict children's access to safe water. In many conflicts around the world, more children die from diseases linked to unsafe water and sanitation than from direct violence. UNICEF is seeking to change that by developing water, sanitation and hygiene systems that can withstand conflicts and crises and be sustainably managed. The goal is to remove the threats unsafe water can pose and accelerate progress toward universal access, prioritizing those most in need.

Learn more about the importance of developing sustainable water and sanitation systems for all at unicef.org.

Top photo: Reason to celebrate: a new pipeline delivers safe drinking water to over 40,000 people in Southern Madagascar, a region that has long suffered from acute water shortages. © UNICEF/UN0267014/Raoelison