For Nepal's Anxious Children, Help Is on the Radio

As aftershocks rock Nepal, UNICEF teams up with the national radio station to provide badly needed emotional support to survivors.

Above: Children gathering to listen to “Bhandai Sundai” in an informal camp in the Khokana neighborhood of Kathmandu Valley’s Lalitpur district.

The 7.3 magnitude aftershock that hit Nepal this week shattered the fragile semblance of calm that was beginning to return as survivors screwed up their courage to move back into buildings still standing after the April 25 earthquake.

In the tents, children become like prisoners, jittery and worried.

“I was very close to the epicenter when Tuesday’s quake hit and children were hugging one another and crying for hours as people fled their homes,” ” says Rownak Khan, Deputy Representative of UNICEF Nepal. “Many children are suffering from nightmares and cannot sleep, while others are constantly clinging to their parents.”

With no place to call home except for a tent, and unable to go to school — nearly 1 million students have been left without classrooms — children who’ve suffered and/or witnessed devastating loss find emotional respite is hard to come by.

“We know from experience how children are traumatized when they can’t go back to their homes or schools,” explains Kul Gautham, former Assistant Secretary-General of the U.N. and former Deputy Executive Director of UNICEF.  "In the tents they become like prisoners, jittery and worried, so it is really important that if they can't go back to school, they have safe spaces where they can sing, learn and cope with the crisis."

Setting up child-friendly spaces, like the 28 established in affected areas within three days of the April 25 quake, is one way UNICEF safeguards children during crises. Such emergencies can inflict grief and distress that can trigger serious post-traumatic disorders. But managing trauma during natural disasters is a serious challenge when people are displaced, facilities damaged and health workers in short supply.

Earlier this month, Radio Nepal and UNICEF Nepal stepped into that breach, launching “Bhandai Sundai,” a radio program designed to help families and children cope with the earthquake’s devastating aftermath. “We have never done anything like this before,” says anchor Pramod Dahal. “Radio Nepal feels really proud and emotional about it.”

Covering 90% of the country, from cities to the most remote villages, Radio Nepal has partnered with UNICEF to extend therapeutic-type services to a nation already underserved by mental health professionals. “With this unique program, we are reaching children, women and families whom we haven’t yet been able to reach because of limited access to the remote areas they are living in,” says UNICEF Nepal Country Representative Tomoo Hozumi. “This initiative with Radio Nepal will bridge the gap and help those in the most-affected districts by providing lifesaving information and support for trauma recovery.”

“Bhandai Sundai,” which means “listening and talking,” airs four times a day, with a half-hour morning update on the relief response and an afternoon 20-minute “edutainment” segment for the 950,000 children who’ve been denied schooling by the quake’s destruction of more than 24,000 classrooms. Though schools were supposed to open on May 15, this week’s earthquake means children won’t begin returning to comforting classroom routines until the end of the month. 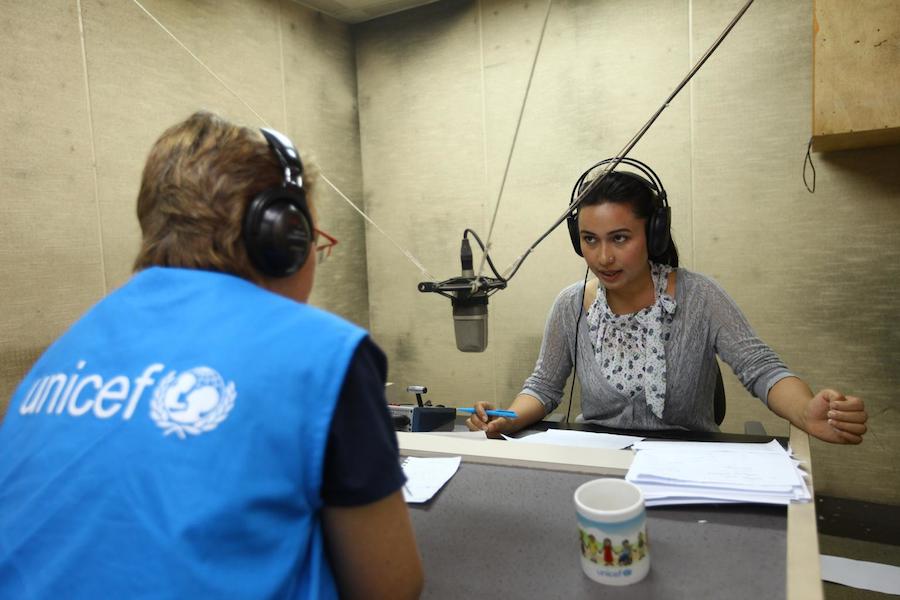 A chance to connect

“For the first time, I felt very relieved. The program gives a chance for genuine conversation,” says Min Raj Gyawali, one of the first parents to call Radio Nepal to talk about his daughter’s traumatic experiences. “This is so relevant for millions of parents to help their children.”

In fact, barely a few hours had passed since the program’s launch when studio telephones started ringing with calls. “Most parents [were] seeking counseling about how to remove the fears of their children and help them to move on,” says Radio Nepal’s Deputy Executive Director Dhanendra Bimal.

We all felt so good listening to the children talk and sing.

“I was so excited to hear children talk, and we all felt so good listening to them talk and sing,” says Bina Maharjan, a 19-year-old from Khokana, where more than 200 families have lost their homes. She says many teenagers like her are still afraid, living in a state of anxiety that Gautham warns can make them vulnerable to another serious threat: human trafficking:

“There is the fear in Nepal that unscrupulous people will lure children [by saying] ‘Oh you have nowhere to go; come with me, we’ll get you to school, we’ll get you a job in the big city.’ That has happened in the past, so protecting children who may have lost their parents is very important.”

"Bhandai Sundai" is giving a nation of people struggling to move ahead the assurance that they are not alone. At 5:21 p.m., while 15-year-old Sadiksha Khatiwada was on the air speaking to the host, the earth shook again. It was an aftershock of 4.9 magnitude, one of many that have threatened property and lives.

When the host urged her not to be afraid, Sadikhsa calmly replied, "I am no longer afraid!" 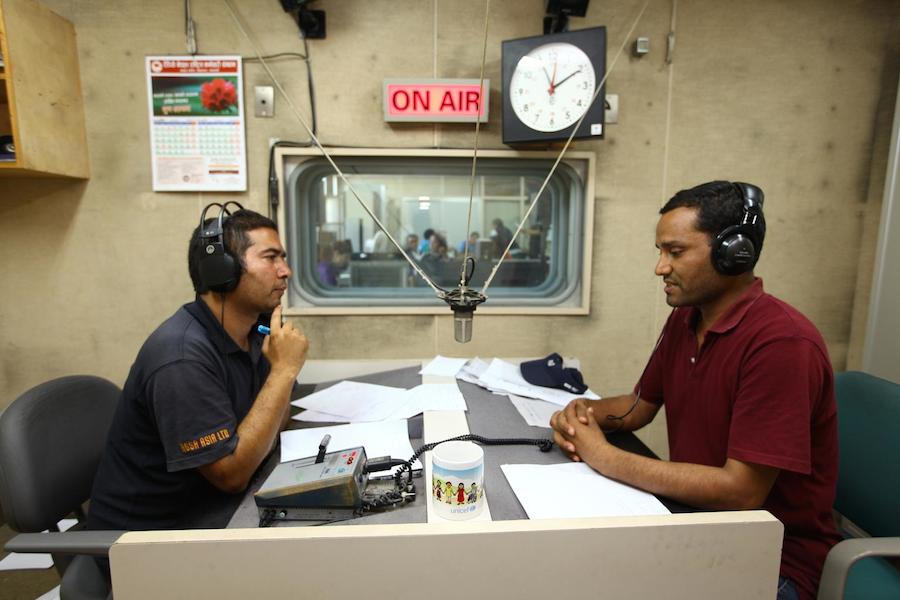