#MeToo Sparks a Global Conversation on Violence Against Girls & Women

UNICEF supports the right of all girls and women to live a life free of sexual harassment and assault.

UPDATE: A troubling new UNICEF report and a #HerToo social media movement highlight the need to speak out against violence and sexual abuse on behalf of those suffering in silence.

"If you've been sexually harassed or assaulted write 'me too' as a reply to this tweet," actress Alyssa Milano tweeted on Sunday afternoon, October 15. Within days, the hashtag #MeToo had been used 1.25 million times. Social media feeds filled with stories of workplace harassment, childhood molestation and rape.

Milano, a UNICEF Ambassador since 2003, had clearly touched a nerve.

If you’ve been sexually harassed or assaulted write ‘me too’ as a reply to this tweet. pic.twitter.com/k2oeCiUf9n

Recent reports  in The New York Times and The New Yorker  exposing decades of predatory sexual behavior by movie mogul Harvey Weinstein sparked this latest discussion on widespread violence against women. But the conversation is hardly a new one. Activist Tarana Burke used "Me Too" in the grassroots campaign she launched 10 years ago to help bring the issue to light and let victims of sexual assault know that they were not alone. A frank discussion of gender-based violence is vital to the health and well-being of girls and women around the world — and to society as a whole.

UNICEF is very much in favor of this conversation: As feminist activist Gloria Steinem put it, "The greatest indicator of the world's stability, wealth and safety is the status of women." All girls and women deserve to be treated with respect, to choose and shape their own future free of intimidation and violence. Violence against women needs to be discussed openly, not hidden.

The shame belongs not to the abused, but to the communities that allow assaults on girls and women to go unchallenged

UNICEF is fighting to end violence against girls and women

When girls do better, we all do better. UNICEF is focused on helping girls thrive by: 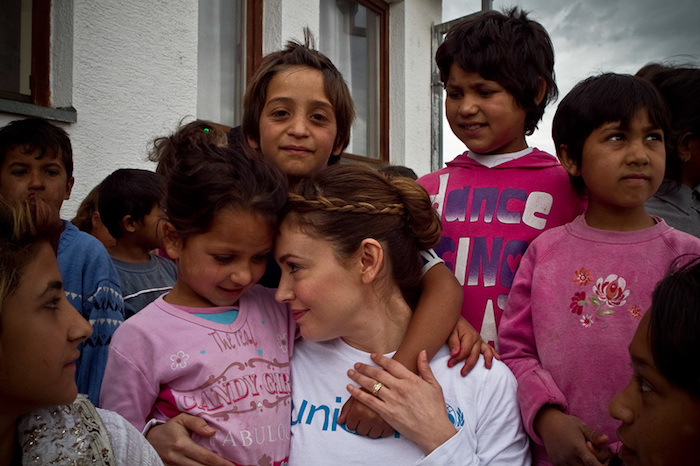 Help girls grow up in safety, with dignity by making a 100 percent tax-deductible donation to UNICEF.

Banner photo, top: Cynthia, 21, a migrant from Delta State, Nigeria at a safe house on the outskirts of Taormina, Sicily, Italy on April 27, 2017. Cynthia was smuggled into Europe by sex traffickers, who first promised her work at a pharmacy, but then forced her into prostitution.  © UNICEF/UN063817/Gilbertson VII Photo