The COVID-19 pandemic is threatening decades of progress in the fight to eliminate FGM. UNICEF is working with partners to protect girls from this cruel practice once and for all.

Excruciatingly painful and internationally condemned, female genital mutilation (FGM) remains a frightening reality for girls and women around the world. At least 200 million women and girls worldwide are living with the lifelong consequences of this gender-based violence. In most cases, girls are mutilated before their fifth birthday.

Even before the start of the COVID-19 pandemic, 68 million girls worldwide were estimated to be at risk of FGM between 2015 and 2030. Now, countries already grappling with rising poverty, inequality and rising conflict are seeing the impact of the pandemic further threaten years of progress in the fight to end the brutal practice. As the pandemic continues to disrupt programs that help protect girls from FGM, an additional 2 million cases may occur over the next decade. 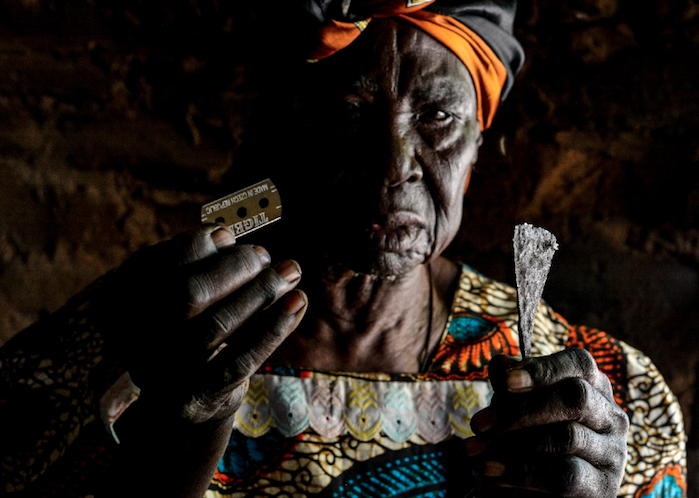 Odmangal C. has performed more than 1,000 FGM procedures on children in Chad. She has never cleaned the blades. She believes doing so would destroy their magic. © UNICEF/Sebastian Rich

FGM is practiced in countries around the world

FGM is practiced around the world; 27 countries are considered "high prevalence" by the World Health Organization. The practice persists in diaspora immigrant communities throughout Europe and the United States as families bring the custom with them from their countries of origin.

"When you don't know otherwise, you just adopt the traditions," said 11-year-old Angela* [her name has been changed to protect her privacy], who ran away from her home in Uganda, where FGM has been outlawed since 2010, and traveled to Kenya with friends in search of someone who would perform the procedure. "We decided it was normal to be cut, so we also wanted it."

FGM differs across regions and cultures, often involving life-threatening health risks. It is almost always carried out on minors between infancy and age 15. Defined as "all procedures involving partial or total removal of the female external genitalia or other injury to the female genital organs for nonmedical reasons," FGM inflicts severe pain and causes extreme emotional trauma that can last a lifetime.

FGM is a severe violation of girls' and women's human rights

FGM also increases the risk of deadly complications during pregnancy, labor and childbirth, endangering both mother and child. It reflects the low status of girls and women and reinforces gender inequality. There are no health benefits, according to the World Health Organization. In every case, FGM is not just an "old custom" — it is a cruel violation of girls' and women's human rights.

UNICEF is co-leading a global fight to stop FGM

Working in partnership with the UNFPA on the largest global effort to eliminate the violent practice, UNICEF fights FGM at every level. Social workers stand up for vulnerable young girls on a one-on-one level. Trained leaders organize community outreach programs. Policy advocates encourage governments to change health care practices, human rights policies and legislation. UNICEF also provides medical care for girls who have been harmed and traumatized by mutilation.

Women AND men oppose FGM, even in countries where it is still common

Age-old traditions die hard, but public opinion is gradually shifting against the ritual mutilation of young girls' bodies. According to UNICEF data, 67 percent of girls and women and 63 percent of boys and men say they want the practice to end.

It's time to end the cycle of violence and protect girls from female genital mutilation. Please donate.