"Let's have the sport of basketball be the flag and bring attention to the cause." — Marcelo Correa

As March Madness unfolds with a national championship on the line, more than a dozen basketball players have a different prize on their minds — building futures for Syrian children affected by the country’s terrible war, now entering its seventh year.

For these players, it’s personal. They may be American, Syrian, even Brazilian; some are former NBA, some former NCAA —  but all played ball in Syria and have a deep concern for the country’s children. They’ve come together to support UNICEF’s efforts to aid Syrian children, and for the next three weeks, they'll be sharing the Play For Syria Facebook fundraiser with friends, family, and basketball teammates; at tournament viewing parties; and through their social networks. The goal: provide Syrian children with desperately-needed water, nutrition, health care, protection and education — both a present and a future.

The Play For Syria team was put together by Damond Williams, founder of the Chicago Basketball Academy. A one-time star for the McNeese State Cowboys, former Harlem Globetrotter and well-traveled international shooting guard, Damond spent three seasons playing for top Syrian clubs. In 2009, he won a championship with Al Jalaa, a team from the city whose name is now synonymous with Syria’s suffering — Aleppo. 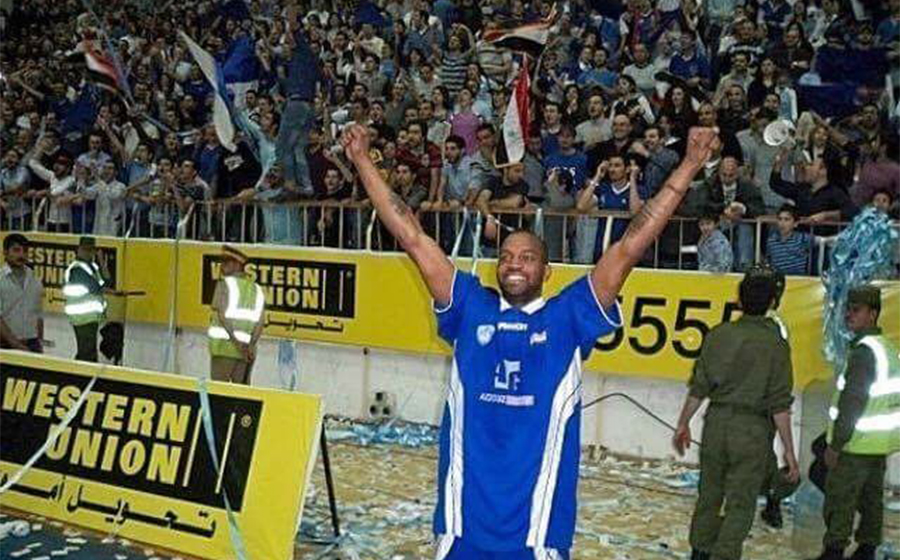 “I loved living there,” says Damond, “people cared for one another. I felt a strong sense of culture and history that made me want to learn more. And I was amazed at how dedicated fans were to the game. It means so much to them. In Syria, basketball is livelihood, brotherhood, lifestyle, respect, honor.”

I loved living there. People cared for one another ... and I was amazed at how dedicated fans were to the game — Damond Williams

7-foot center Christien Charles, who also played in Aleppo, was similarly affected by his experiences on-and-off the court. “Playing in Syria opened my eyes to a lot of misconceptions about Muslims in the Middle East. The people were very warm and lived simple, peaceful lives. It was one of the most meaningful experiences I've had playing abroad. My teammates treated me as a brother and always made sure that I felt comfortable and at home.”

Family — it’s a common theme among Play For Syria teammates. “They consider you family when you play there,” says Kris Gibbs Smith, who played in Homs for two seasons and Damascus for third. “When I first arrived I was very nervous, but by the time I left, I felt like it was a place I was very welcome.”

Adds Kenyon Gamble, who played for Al Ittihad, “The thing that I remember most vividly is their kindness. Syrians would offer you the food off of their plate, the shirt off of their back, and the money out of their pocket.  They always wanted to make sure I was well taken care of, and I don’t just mean the Ittihad fans.”

These children have done nothing to deserve what is happening  ... If we do not step up and help, who will? — Kenyon Gamble

Playing in Syria could be challenging. John Thomas, who captained a NCAA Final Four Minnesota Gophers squad and wore numerous NBA jerseys, remembers a game where the gym was so cold he could see the steam coming off of his body. 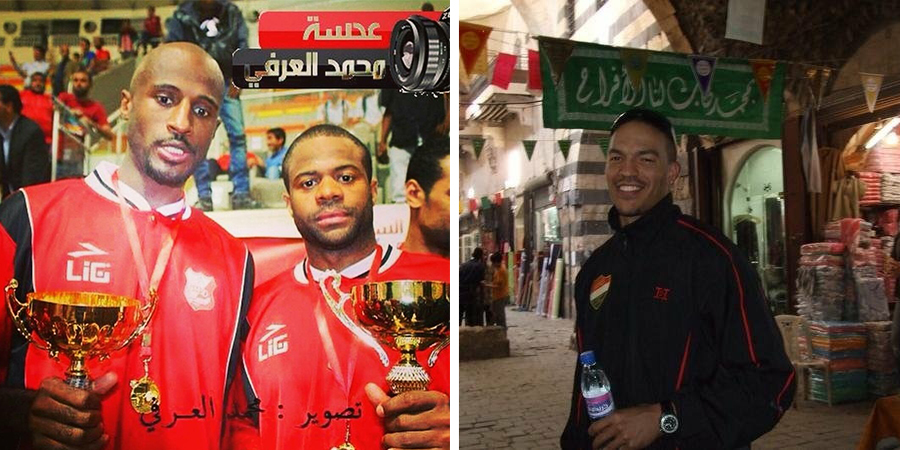 Ryan Holmes (L) with a teammate; Jay Joseph in syria.

“Aleppo’s infrastructure was limited even before the war,” he says. “With rolling power blackouts and low water pressure, the struggle was definitely real. But I remember the kind people and the great food.  My teammates and I would go to this special chicken spot and I promise you, it was the absolute best place to get wood-fired chicken.  I’d put that place against any in the world because it was truly amazing!”

Syrian children are waiting ... no electricity, no school, they don’t have the most basic things in life — Sharif Sharif

For Jay Joseph, who played for Al Ittihad in the 2009 Asian Championships, a local coffee shop became a special oasis. “It was an awesome place.” Wayne Oliver, who spent two seasons in Syrian arenas, longingly recalls the restaurant called Hattab, “The best shawarma I ever had.”

These memories, of favorite local haunts; of cold gyms and warm hearts; of living in welcoming communities; of playing with supportive teammates in front of dedicated young fans; this is what make the devastation in Syria so heartbreaking for the Play For Syria teammates and propels their desire to help the country’s children. Says Brazilian-born Marcelo Corrêa, who played in Syria for six years and only left reluctantly after the first bomb exploded in Aleppo, “The Syrian people accepted me and my family completely.  If it wasn't for the war, me and my wife would still be there without a doubt. The love for basketball was amazing. The singing and the cheering at the games I will never forget — an energy that will stay close to my heart forever.”

“It was one of the most peaceful places I ever lived ... the genuine love shown to me on a daily basis was like nothing I had ever experienced,” says Gamble.

For Sharif Sharif and Sari Papazian, former members of the Syrian national team, there is added motivation: the determination to help reconstruct a future for the country in which they were both born and raised.

“Syrian children are waiting,” says Sharif. “Life under the bombs. No electricity, no school, they don’t have the most basic things in life. Adds Papazian, “Living in Syria was beautiful. It’s impossible to put in words unless you have experienced it. I think that’s why a lot of foreigners that went to Syria like Damond are so willing to help.”

Ryan Holmes, who played in Syria in 2008, agrees fully, “Being given the opportunity to help them is a blessing and something I wouldn't pass up."

You can donate to the Play For Syria fundraiser through April 17, 2017. Funds raised will support UNICEF programs for children in Syria and Syrian child refugees.

My message to Syria's children:  you are loved and cared about by people throughout the globe especially people who've had the opportunity to live amongst you and experience the spirit of the Syrian people. — Christien Charles

The UNICEF Play For Syria Team