A Malnutrition Tragedy Averted in Afghanistan

Last November in the west of Afghanistan, a very frail 4-year-old girl named Parwana was diagnosed with severe acute malnutrition (SAM). A UNICEF mobile nutrition team nursed her back to health with Ready-to-Use Therapeutic Food (RUTF), and she has since made a full recovery.

"One year ago, I was afraid she wouldn't make it," says Sam Mort, UNICEF Afghanistan's Chief of Communication, Advocacy and Civic Engagement. "Today, Parwana skips, giggles and nags her mum to get her to school in time."

Below, Mort recalls her recent visit to catch up with Parwana and her family at their home in a camp for internally displaced people outside Herat.

No sooner had I sat down on the floor in the tiny family room, than Parwana skipped towards me and sat down on my knees. Spontaneously, she threw one arm around my neck and hugged me with such warmth and affection that I could barely believe that just one year ago, this little girl was so weak she barely had strength to lift her head and look at me.

Her warm hug couldn’t distract me, though, from the fact that she sat entirely in the nook of my arm, like a small bird. She is very, very small for her age. In medical terms, she is stunted. This means not only is she short for her age, but her physical and cognitive development has been hindered due to lack of nutrition. 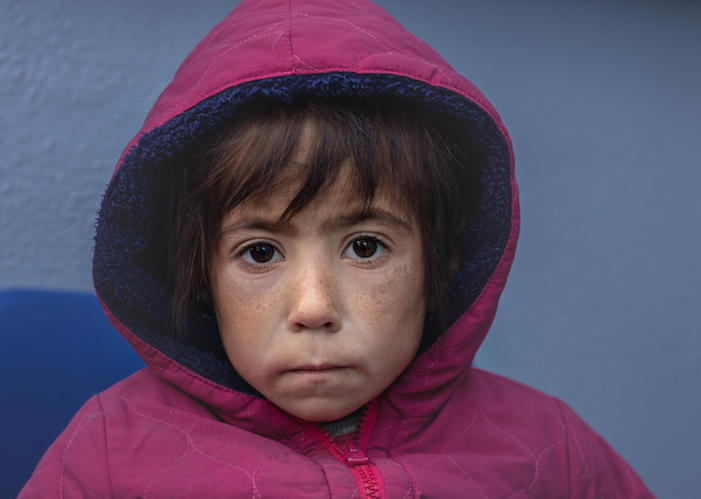 Four-year-old Parwana weighed just 20 pounds when her mother brought her to a UNICEF-supported health clinic in Herat, Afghanistan, on Nov. 11, 2021. © UNICEF/UN0551776/Bidel

Last November, in a health clinic in Herat, I sat with a nutrition counselor when a frail, pale and anxious mother walked in carrying what looked like a big red winter coat. It took us a few moments to realize that inside, there was a child.

Malika gently placed her daughter on the chair. She didn’t move. Her head drooped awkwardly to one side, and she stared at the same spot on the ground despite my best efforts to engage her with smiles and tickles. At 4 years old, she weighed around 9 kilograms (less than 20 pounds). 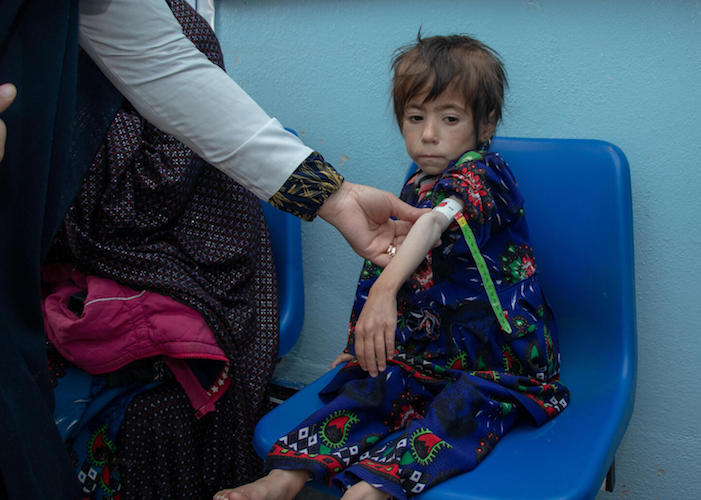 We checked up on Parwana a few months later. After what had been a hopeful start with a kilogram (2.2 pounds) weight gain, she was, sadly, even smaller, weaker and less responsive. Her parents told us she suffered diarrhea every day.

When the UNICEF-supported mobile health and nutrition team had tried everything they could, she was referred to a specialist who diagnosed a wheat intolerance – celiac disease. No more bread for this little girl. But for a family so impoverished they eat bread and tea for two meals a day, that was a challenge for her parents.

Although, her father quickly told me, “It’s a relief to know what’s wrong with Parwana so that we can give her the right food and watch her recover.”

Sitting in the dark sitting room, a tiny window affording the only light, I found myself unable to look away from Parwana’s chubby wee cheeks. This time last year, they were hollowed out. I remember her skin was stretched so tight over her cheekbones and jawline, I worried it would tear. Years of severe malnutrition and sickness have taken their toll on this little girl.

A World Food Program survey found that, on average, 92 percent of Afghan household income is spent on food

Parwana, left, in a photo taken on Nov. 6, 2022, remains much smaller than her younger sister, Afsana. Severe acute malnutrition and sickness have stunted her physical and cognitive development. © UNICEF Afghanistan/2022/Omid Fazel

No one would believe that her sister, Afsana, a foot bigger than her, is her younger sibling.

When I ask Parwana what the best thing about being healthy is, she smiles and says, “School!”

In grade 1, alongside Afsana, the girls love going to the UNICEF-supported community based school in the camp for internally displaced people, just outside Herat, where they live.

I want to be tall! I need more food and medicine. — Parwana, age 5

While I chat with her mum, Parwana interrupts to say, “I want to be tall! I need more food and medicine.”

When I think of all the material things children her age want – dolls, toys, clothes, electronic devices – her request is, by comparison, so humble.

I ask Parwana’s father, Mohamed, how he is preparing for the brutally cold winter months.

“I’d buy wood first to keep the family warm, then oil, then rice." 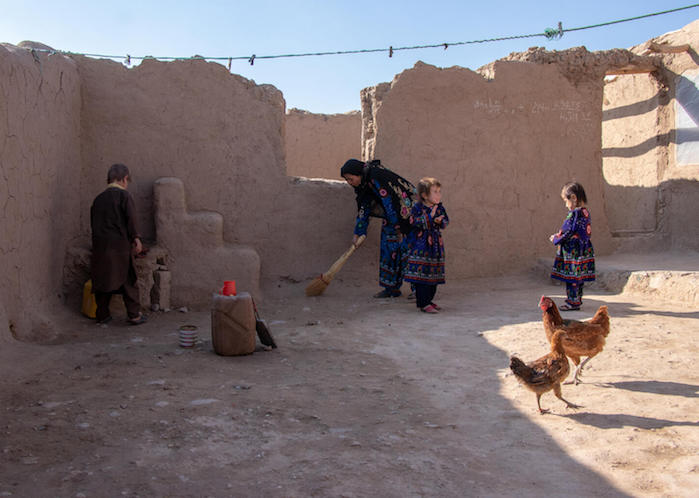 Parwana and her family in the courtyard of their house in an IDP camp just outside Herat, Afghanistan, in 2021. © UNICEF/UN0551779/Bide

Under the previous Government, Mohamed was a policeman. It was a job he loved. He felt proud that he could provide a decent living for his family. That all changed when the Taliban seized power last August. In the past year, he has worked a total of three days. Laboring on a nearby saffron farm, he earned $2.50 per day.

So, how is he surviving? Until now, loans from relatives. But he tells me, “They won’t give me any more.”

Mohamed has no prospect of employment.

Malika is especially worried about what the winter months will mean for their baby, 6-month-old Rahanna. “The weather changed four days ago,” she tells us. “It’s so cold at night. We all sleep wrapped up in blankets, with the baby close to us. But I’m scared.”

As we begin talking about something else with Mohamed, the translator notes that Malika sighs quietly, “Life is miserable.” 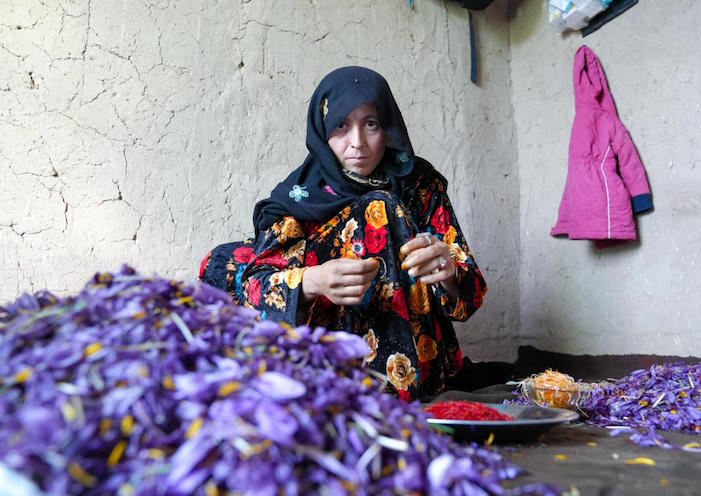 Malika, above, and her husband, Mohamed, work day and night cleaning saffron flowers to buy what little food they can afford for their children. Eight hours of work pays less than 50 cents. © UNICEF Afghanistan/2022/Omid Fazel

Malika looks tired. For the last week, from early morning to late at night, she and Mohamed have been ‘cleaning saffron flowers.’ This intricate, back-breaking job involves gently removing the three yellow saffron stems from the dried saffron flower. For every kilogram of saffron, they receive less than 50 cents. It takes them around 8 hours of work to earn that. And, yet, they are grateful to have, they hope, two more weeks of work from the local saffron farmer.

With this hard-earned money, Mohamed says he will buy gas with which to cook. In the evenings, he tries to give the children rice and vegetables to eat but he shakes his head as he speaks.

Your contribution will help UNICEF reach more children with the emergency assistance they need to survive and thrive. Please donate.

Learn more about UNICEF's response to the humanitarian crisis in Afghanistan.