Malnutrition Crisis in Afghanistan: One Girl's Journey to Recovery

At 4 years old, Parwana weighed less than 20 pounds. Then a nutrition counselor started her on a regimen of Ready-to-Use Therapeutic Food (RUTF), a fortified peanut paste, and she began to regain strength. As malnutrition rates rise, UNICEF is on the ground in Afghanistan, ramping up its response as the country's sole RUTF supplier, among other interventions.

Little Parwana had come with her mother to the UNICEF-supported health facility in Herat, Afghanistan, in the nick of time. She had little energy, her skin dry and wrinkled, her cheeks hollow. She weighed less than 20 pounds, half the recommended weight for her age and height.

As the nutrition counselor measures Parwana's upper arm circumference — a quick way to determine whether a child is malnourished — her diagnosis is confirmed: severe acute malnutrition. A Mid-Upper Arm Circumference (MUAC) measuring strip is used to quickly diagnose malnutrition in children. Above, a health worker at the UNICEF-supported Bab-e-Bargh Comprehensive Health Center in Herat city, Afghanistan, monitors the nutritional status of 4-year-old Parwana, who is being treated for severe acute malnutrition. © UNICEF/UN0551775/Bidel

Across Afghanistan, an estimated 3.2 million children under the age of 5 are expected to suffer from acute malnutrition in the coming year. Without urgent action, UNICEF warns, over 1 million of them could die. 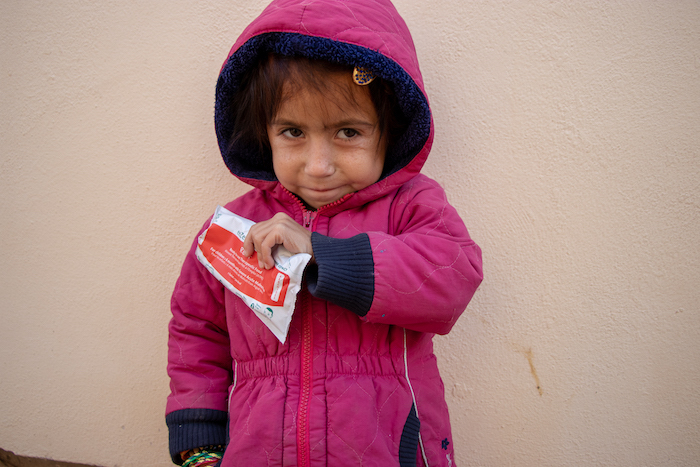 UNICEF, the sole provider of RUTF in Afghanistan, has been sending hundreds of thousands of the lifesaving packets — which have a long shelf life and do not need to be refrigerated — all over the country as the number of children who need treatment rapidly increases.

A dire situation for families in Afghanistan

Malnutrition risks deepen as families go hungry. After a dry winter, a weak harvest and drought, almost half of the people in Afghanistan do not have enough food to eat. Many do not know where their next meal is coming from.

Parwana’s mother says that since her husband lost his job, the family has struggled financially. He used to buy chickens from farms and sell them in the market, but some days there are no customers — and no money. On those days, a glass of hot tea and a loaf of bread is the only sustenance the family has. 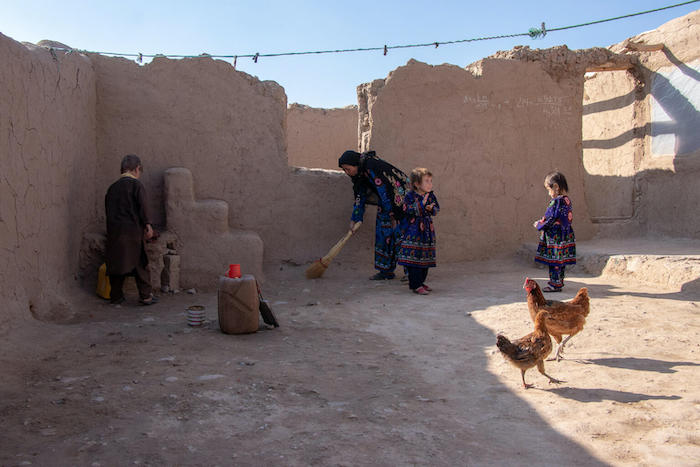 Parwana, 4, right, at home with her mother and brother in Shahrak-Sabz IDP settlement in Herat city, Afghanistan. Parwana was diagnosed with severe acute malnutrition, the most extreme form of malnutrition. She is one of an estimated 1 million children in the country who urgently need treatment. © UNICEF/UN0551779/Bidel

As a result of prolonged hunger, Parwana’s stomach would hurt, and she would wince and cry, her mother tells us.

Once Parwana begins treatment at the clinic, the change in her is almost immediate. Energized by the RUTF, and feeling a little stronger, Parwana begins to interact with people around her. Lifting her head, she gently smiles and squeezes the finger of a UNICEF staff member.

The nutrition counselor asks Malika to return to the clinic with her daughter every week for more tests and more RUTF until Parwana has made a full recovery.

Two weeks later, as Parwana comes in for another check-up, she is visibly healthier. Her cheeks are rosier; her upper arm circumference measures 1 centimeter larger and she has gained over 2 pounds. She leaves the clinic with another armful of the nourishing RUTF.

In addition to distributing RUTF, UNICEF is also doubling the number of nutrition counselors and mobile health and nutrition teams on the ground so that children in Afghanistan's most remote areas can be tested for malnutrition and treated.

UNICEF also provides supplies and funding to 1,400 nutrition sites across the country to support nurses and health workers as they identify and treat children quickly. UNICEF plans to expand these services further in 2022.

Learn more about what UNICEF is doing to meet the urgent needs of vulnerable children and families in Afghanistan.