A longstanding partnership between MSNBC's Lawrence O'Donnell and UNICEF is educating and empowering Malawi's next generation.

To date, the K.I.N.D. (Kids in Need of Desks) Fund partnership between MSNBC's Lawrence O'Donnell and UNICEF has raised more than $21 million, making a significant impact on the lives and educations of thousands of young students in Malawi. One of those young people is Joyce Chisale, the smart, dynamic and exceptionally talented young woman O'Donnell first met in 2016. Since then, she has captivated America with her poetry, her dedication and her dream of becoming a doctor. Chisale graduated high school this past spring, and while she prepares to apply to college and follow her dream to attend medical school, she shared some personal reflections on her experiences.

Thanks and congratulations to all those who donated to the K.I.N.D. Fund: your generous contributions have helped Chisale on her journey from eager young student to confident poet and aspiring doctor. Join Lawrence O'Donnell and UNICEF in supporting the education and empowerment of other young women like her.

I was very excited to go to a boarding school because I had not been away from my parents for more than a week. When departure day arrived, my parents escorted me to school and paid my yearly school fees — 65,000 Malawi Kwacha (around $90) — almost half of my father’s annual salary. As my parents bid farewell to me, I found myself wanting to cry. My excitement was gone and I had to face new people alone.

Things were difficult as a year 1 student, and though I found the subjects hard, I tried my best because I had a goal of being top of my class. This wasn’t easy, as there were a lot of brilliant students in the class. When end of term results came out, I emerged as the first position! Outside of classes, there were other challenges. For instance, at the cafeteria, we had to wait for students in upper classes to receive their meals and we were always the last ones to eat and get water. 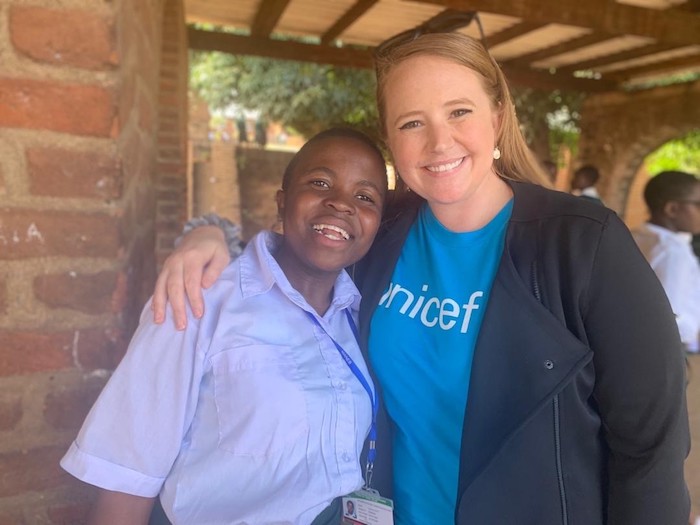 In Malawi in 2019, UNICEF USA Director of Public Relations Lauren Davitt caught up with student Joyce Chisale, who graduated from high school with support from the K.I.N.D. Fund. © Lulutani Tembo

In year 2, I was more accustomed to life at school, but the annual fees increased to 80,000 kwacha ($110). My life was no longer the same, because it was difficult for my father to pay for my school fees. Shortly after, Mr. Lawrence O’Donnell visited and told me and my father that he would be paying for my school fees. I was very excited because I knew that I would no longer be sent home due to lack of school fees. Since that day, I made up my mind that I will work extra hard and always emerge in position one.

That was also the day I recited my poem “Little by Little” for Lawrence, and told him that apart from school, I also write poetry. I was very happy when I heard that my poem was aired on Lawrence’s show. I was also able to attend a writing and blog training during holiday break. It was very awesome. I met a lot of people and made new friends.

During the second term of year 3, I was selected to be one of the representatives for our school in the national quiz competition. Our school won the National Championship! That same term was also the happiest moment of my life, for I visited the USA for the first time. It was so exciting that I was going outside the country for the first time, flying for the first time, and was the first person in my family to go overseas. The trip to NYC and Boston was an amazing adventure because I met so many people and I had a lot of fun. And, after coming back from the USA, my friend and I were chosen to represent our school at a science fair.

Form 4 was the most difficult year academically, as there were a lot of things to cover and I was also planning to sit for national exams. I had to adjust my schedule to make sure I could spend as much time as possible preparing. One of the most exciting moments came on graduation day, a colorful event for everyone. I was so excited to receive the award of an overall performer and head girl (top marks in the class). After two weeks of exams, I was very happy to go back home.

My parents are proud of me, and I'm proud of myself for finishing school and passing with flying colors.

The K.I.N.D. Fund scholarship helped me a lot since it provided me with supplies and opportunities and helped me avoid some of the challenges facing girls in Malawi, including being forced to get married before completing studies, traveling long distances to reach their schools and more. My parents are proud of me, and I’m proud of myself for finishing school and passing with flying colors. Now that I have completed my secondary education, I am looking forward to tertiary education. I would like to enroll in medical school, so I can achieve my goal of becoming a doctor. I will also continue writing poems because I want to share my voice through them.

Lawrence O'Donnell, host of MSNBC's "The Last World With Lawrence O'Donnell," created the K.I.N.D. Fund with UNICEF in 2010 to give more girls and boys in Malawi the chance to pursue their dreams. You can help give them the future they deserve.

Top photo: The K.I.N.D. Fund, a partnership between MSNBC's Lawrence O'Donnell and UNICEF, helps students like Joyce Chisale attend school in Malawi. Chisale met O'Donnell in 2016, when this photo was taken. Now a high school graduate, Chisale plans to study medicine so she can fulfill her dream of becoming a doctor. © Eldson Chagara for UNICEF USA