How UNICEF USA Is Building a Coalition for Children's Rights

UNICEF USA supporters convened on Capitol Hill in March to ensure that the U.S. maintains its support for UNICEF's lifesaving programs.

More than 400 UNICEF USA supporters visited Capitol Hill on March 13, 2018 to hold 200 meetings urging congressional leaders to maintain support for UNICEF's lifesaving programs. The need is greater than ever before: Across the globe, 50 million children have been uprooted from their homes, with 28 million fleeing brutal conflict and millions more escaping extreme poverty. Nearly 1.4 million children are on the brink of starvation in South Sudan, Somalia, Nigeria and Yemen. And every single day, 15,000 children under the age of 5 die of causes that we can prevent.

A child in need knows no politics

A child in need knows no politics. UNICEF is the world's leading voice for children, working in more than 190 countries and territories, providing health care and immunizations, safe, clean water and sanitation, education, nutrition, emergency relief and more. For more than 70 years, UNICEF USA has also been on Capitol Hill, enlisting supporters from across the nation to help give a voice to vulnerable children around the world. The U.S. government's annual contribution to UNICEF provides funds which enable the organization to respond quickly to emergencies, finance innovation and invest in long-term solutions for kids. This funding is more critical than ever as children and families across the globe are facing threats to their lives and livelihoods on a scale the world has never seen. 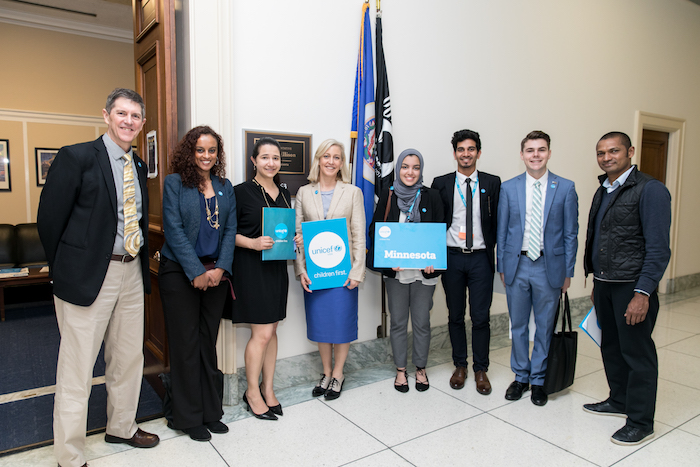 A collective voice on Capitol Hill

On April 4, 2017, nearly 350 UNICEF USA supporters from 32 states convened in Washington, D.C., making it the largest advocacy day in the organization's history. In an effort that truly demonstrated the power of collective action, UNICEF USA board members, student leaders, volunteers and staff held 176 meetings with members of Congress. In these meetings, and in over 15,000 letters sent on that date, constituents asked their senators and representatives to vote in favor of maintaining the U.S. government's annual contribution to UNICEF.

Martin Rendon, UNICEF USA's Vice President of  Public Policy and Advocacy, noted that in his 23 years in Washington, he had "never seen a more impressive day of outreach, engagement and activism with the House and Senate offices on behalf of UNICEF and the world's children." Building on last year's success, the voices of UNICEF supporters continue to carry through the nation and the halls of Congress, sustaining the movement to put children first. 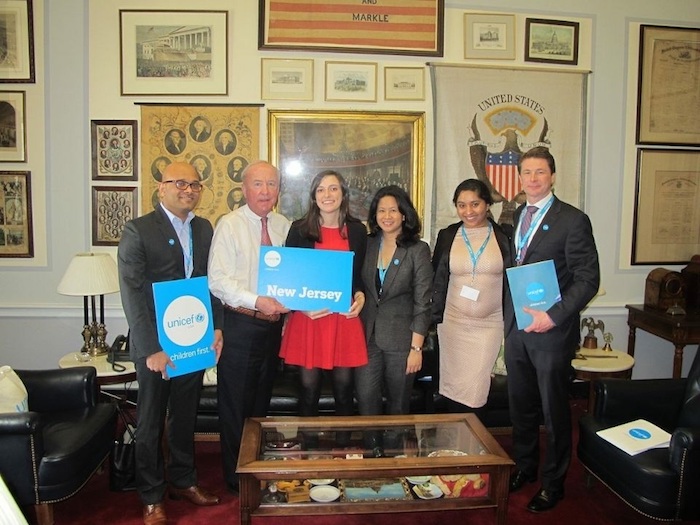 Rep. Rodney Frelinghuysen (second from left), a Republican from New Jersey who is chairman of the appropriations committee, met with UNICEF USA advocates in April 2017 to discuss how best to work together for the world's children.

The United States has traditionally provided more unrestricted funding to UNICEF than any other government, offering lifesaving assistance that reflects universal values of caring for the world's most vulnerable and emphasizes our nation's long history of global leadership on children' issues. Fabienne Pierre, a UNICEF USA Congressional Action Team leader from New York, noted, "When it comes to children and their basic needs, there is no party line. There's no distinction between Democrats or Republicans. Bipartisanship is essential."

Many 2017 Hill Day participants encountered broad bipartisan support for UNICEF. The New Jersey team conducted six visits that day, one of which included Rep. Rodney Frelinghuysen, a Republican who is Chairman of the House Appropriations Committee. Frelinghuysen expressed support for UNICEF and its work around the globe, offering his own ideas on how best to work together to put children first. After the meeting, he even tweeted a photo of the group, affirming that UNICEF provides critical support for the eradication of global poverty.

The success of this historic day became evident when Congress completed action on the Omnibus Appropriations Bill for Fiscal Year 2017, which was signed into law in May. Despite requested budget cuts in many categories of Federal foreign aid, the House and Senate Appropriations Committees agreed to sustain UNICEF's $132.5 million in funding, further reinforcing that there is bipartisan, bicameral support for UNICEF's lifesaving work.

UNICEF USA has achieved such legislative success, year after year, because of the vast array of constituents across the country who dedicate their time, resources and voices to children, helping to ensure they receive the support they need to survive and thrive. The fact that concern for the welfare of the world's children continues to rise above parties and politics gives us hope for the future and for a world that will continue to put children first.

Top photo: During a busy schedule packed with 176 meetings, UNICEF USA advocates took a moment to gather outside the Capitol Building in April 2017. © UNICEF USA