For children who are fortunate enough to take education for granted, the rare days when schools are closed because of bad weather are nearly always cause for rejoicing.

But in the world’s largest refugee camp, in Cox’s Bazaar, Bangladesh, monsoon rains and wind can't keep 10-year-old Roshidullah from his studies. As long as the UNICEF learning centers are open, he tries his best to get there — though sometimes he probably shouldn’t. "The route to school gets slippery," Roshidullah said, taking a break from practicing his upper and lower case Bs. "One time I fell down and hurt my elbow trying to get to class. I went to the doctor, who gave me bandages and medicine."

For many children, migration to another country can open up a world of possibilities — a chance to get a better education, receive higher quality health care and flourish thanks to the new opportunities and better jobs their parents hope to find. But for the children of the Rohingya, who've been forced by violence to start over in an overcrowded refugee camp, it's hard to hold out hope for a better future when daily life is such a struggle.

Victims of one of the fastest growing humanitarian crises in the world, 700,000 Rohingya were driven from their homes in Myanmar by a brutal military crackdown last August. A stateless Muslim minority discriminated against for decades, they came with horrific tales of family members tortured, raped and slaughtered and villages burned. Famished and exhausted from days fleeing on foot, they set up camp on the steep sandy slopes of Cox's Bazaar with no way of providing for themselves.

The Bangladesh government opened its borders and has been generously providing for them since violence first broke out in 2016. But the needs of this enormous refugee population — which quadrupled over a two-month period — far outstripped the developing nation’s capacity to help, requiring massive humanitarian assistance by UNICEF and its partners.

Meet the Rohingya families UNICEF is working to keep learning, healthy and safe.

Though the focus these past few months has been upon fortifying the camps to withstand the heavy rains that began in June, UNICEF has been on the ground since the crisis began, working to meet children's food, water and sanitation, education and protection needs.

After days and weeks on the run from the Myanmar military, many families arrived in the camps with malnourished children. So far UNICEF and partners have screened nearly 263,000 children for malnutrition but the harsh living conditions and monsoon season make nutrition an ongoing concern.

To ensure all children suffering from Severe Acute Malnutrition (SAM) are identified, UNICEF is fitting those already screened with red identification bracelets. Large stocks of essential nutrition supplies, including therapeutic formulas, Ready-to-Use Therapeutic Food and amoxicillin have been prepositioned for any monsoon season spikes in malnutrition, with the capacity to treat 35,000 children.

Equally as important, Mobile Nutrition teams are on the move to provide health and nutrition services to those families who can’t make it to treatment centers. 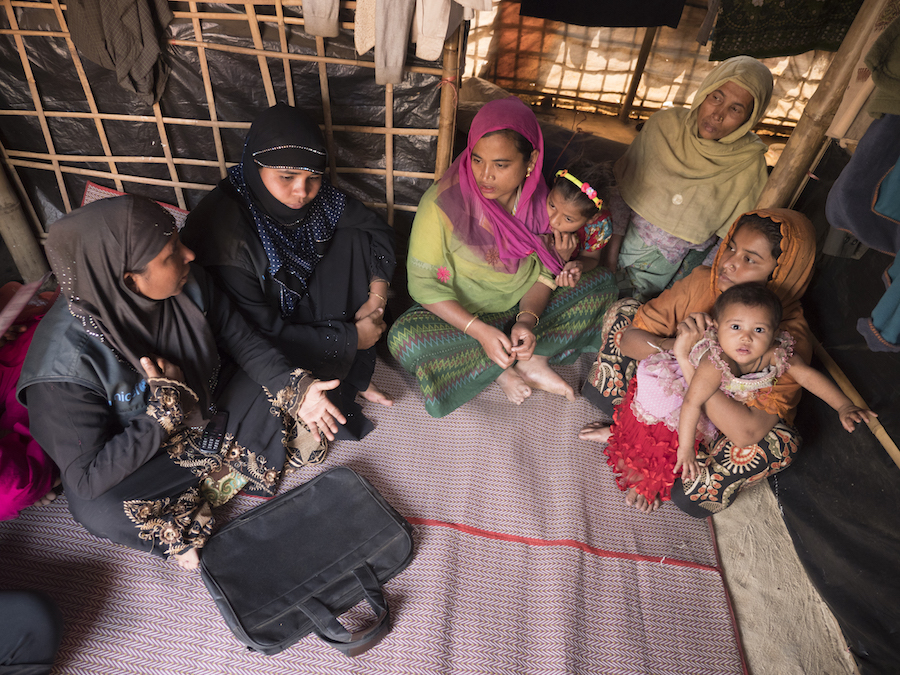 UNICEF Model Mother Johora is one. Above, she checks on 16-month-old Taslima, who is recovering from severe acute malnutrition. Children like him are particularly vulnerable during monsoon season. “Today I’m telling them about the mobile vaccinations,” says Johora, who’s visited at least 1,000 homes since she became a Model Mother. “I also tell them how important it is for the children to wash their hands before and after eating and going to the toilet. We talk a lot about the rains. Everyone is afraid.”

To protect families from cholera, diarrhea and other waterborne illnesses, immunization campaigns have been launched via mobile vaccination units and at health centers. So far, UNICEF has helped  immunize 900,000 children and adults against cholera and trained community health workers go door to door to give families vital information about how to stay healthy during monsoon season. Speaking the Rohingya language has helped community health worker Justna Akther, above left, convince many families to take part in the Bangladesh government’s routine immunization program, which is now open to families in the camps. “Many refugees have never heard about vaccination. They always welcome me into their homes but, at first, are usually a little suspicious about vaccination. It takes a few visits to persuade them of the benefits of immunization.”

Some parents, however, don’t need convincing. Mustapha fled Myanmar with her husband and nine children seven months ago after her village was attacked. Today her six-week-old son, Rachal, will receive three vaccines to protect him from polio, diphtheria, tetanus, whooping cough, hepatitis B, pneumococcal and haemophilus Influenzae type B diseases. 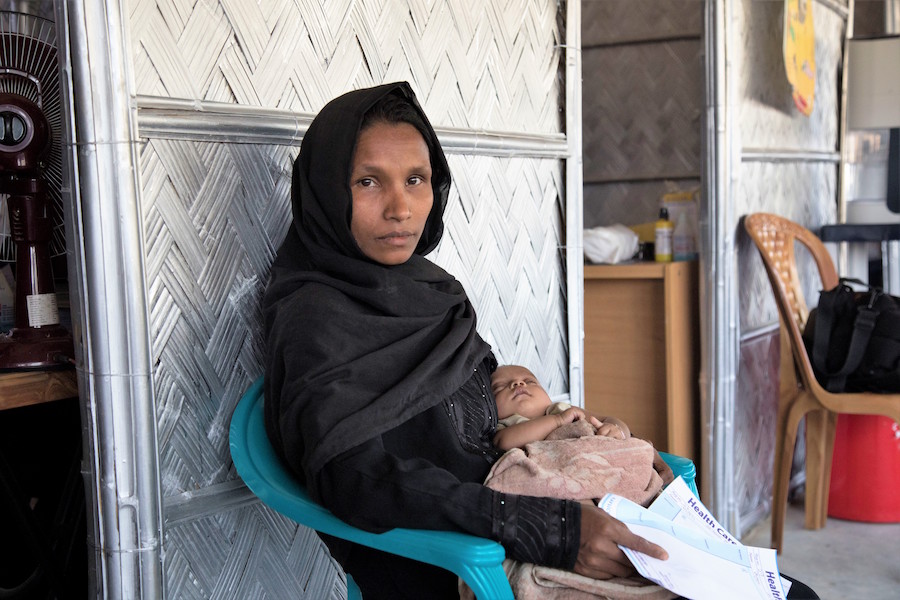 “I had never heard of vaccination before, but people were walking around the camp with microphones explaining why it is important so I decided to bring my children to the health center,” she explains. Now all of Mustapha’s children have been vaccinated.

Keeping children healthy through monsoon season and daily life in the camps is top priority as is giving them the chance to spend time how every child should — learning. UNICEF and partners' goal is to give 530,000 children between the ages of 4 and 18 access to education by the end of this year. 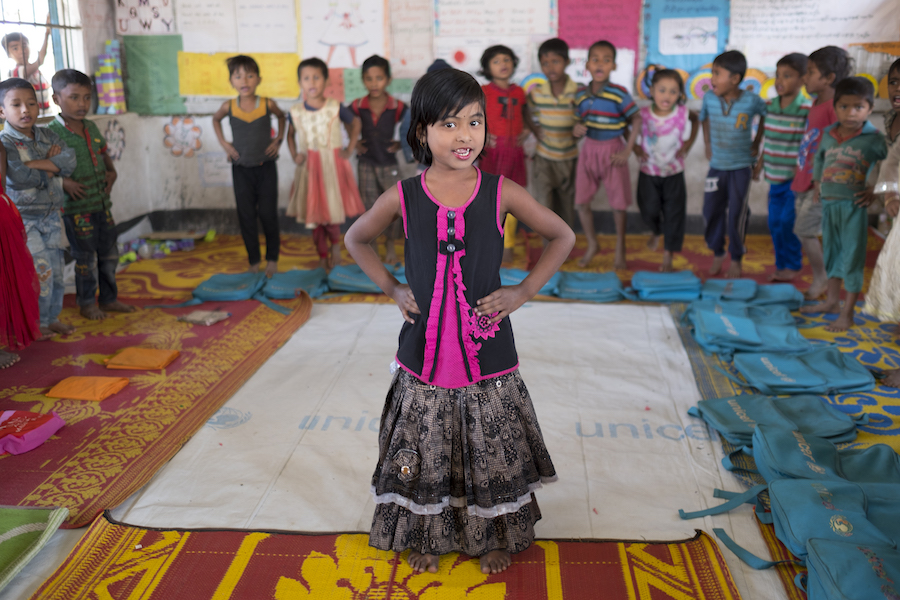 Sehera, 6, attends one of the 795 learning centers UNICEF supports.  “When I dance and sing, I am the most happy!" says Sehera, who studies and plays with her friends at the learning center, while also getting important hygiene lessons designed to teach her how to stay healthy in the overcrowded camps where poor sanitation can easily lead to disease. © UNICEF/UN0157355/Nybo

The opportunity to learn also gives children a chance to experience the healing power of friendship. 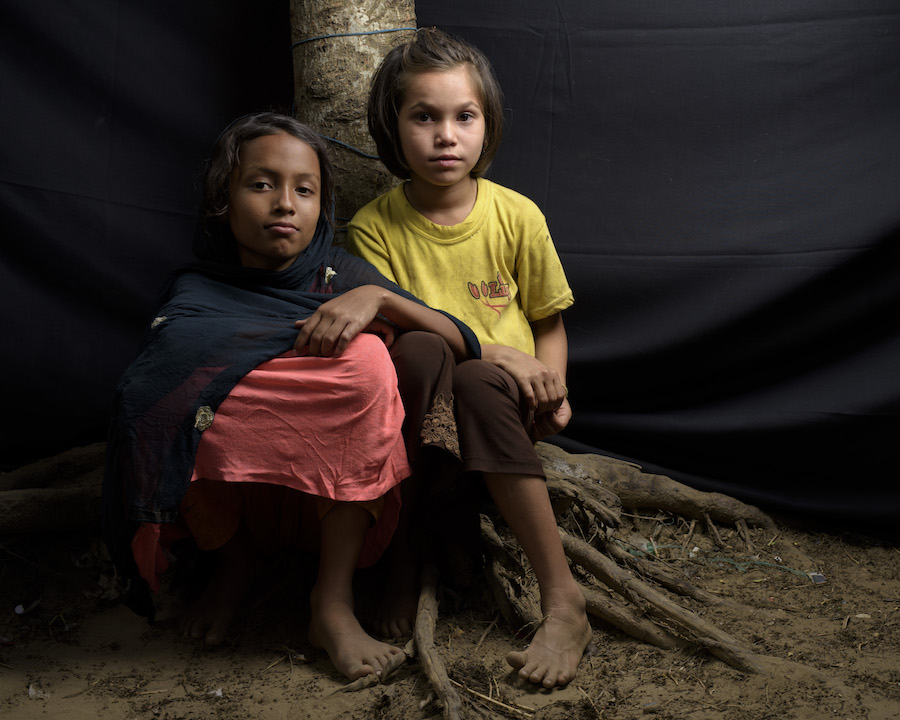 "I feel strongest when I am with my best friend,” says Romayasa (above, right). Only 9 years old, she and her friend Anowara have experienced horrors no child should. But thanks to UNICEF and its partners, they have survived and are moving forward. “We met here in the camp six months ago, and I’m stronger now than when I arrived."

The targeted violence that has left the Rohingya trapped in limbo is only the latest trauma inflicted upon a vulnerable people. For decades, the Rohingya have endured attacks on their cultural identity and legal nationality, forced to watch their children grow up without access to such basic human rights as education, healthcare and even food.

Though the horrors that brought the Rohingya to Bangladesh will be with them forever, in UNICEF, the Bangladesh government and other partners, their children have powerful champions, committed to keeping them healthy, learning and safe.

UNICEF works to provide that same care and protection to children on the move around the world in order to break down any legal, procedural, financial, social or cultural barriers they face as migrants or refugees.

You can help children on the move stay learning and healthy by supporting UNICEF's six-pronged plan to address the greatest dangers faced by child refugees and migrants: