Children lose more than shelter when they're forced to leave home. They lose health care, education, social services — and sometimes, their lives.

Devastating hurricanes, melting glaciers and spreading wildfires may be some of the most recognizable signs of climate change, but there is another critical, yet often overlooked effect: Forced migration. Every year, millions of people leave home because of natural disasters or other ramifications of climate change. This number is expected to rise, with projections ranging from 25 million to 1 billion climate migrants by 2050.

A milestone: On December 10th, 2018, more than 160 nations signed the first international agreement on the migrant and refugee crisis. The United Nations Compact for Safe, Orderly, and Regular Migration, or GCM for short, marks a rare moment of unity on this fraught topic. For the first time ever, climate change has been officially recognized as a driver of migration. Climate change doesn’t just force people to migrate. It fuels poverty, insecurity and even conflict. As in all crises, children are the most at risk physically and emotionally. And when families are forced from their homes, children are more likely to become separated from their parents, increasing their susceptibility to violence, exploitation and abuse.

According to the United Nations Office for Disaster Risk Reduction (UNDRR), sudden onset disasters leave 14 million people homeless each year. Developing nations in the global south are the least likely to contribute to climate change, but the most likely to suffer its consequences. Those in developing nations are the most at risk because they often live in disaster-prone areas and have the most difficulty recovering and adapting to climate shock-related damage. 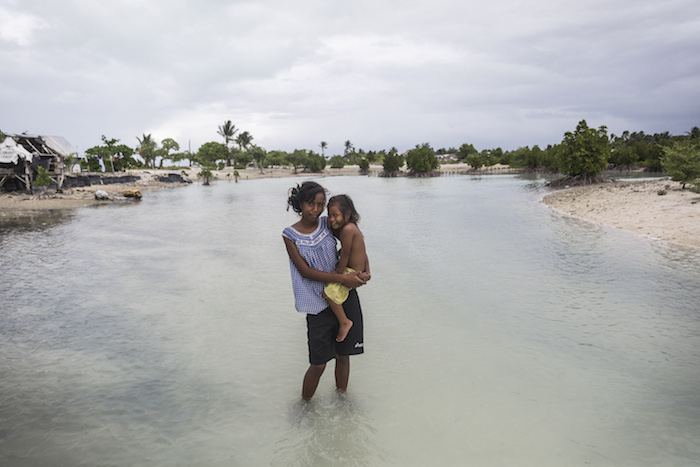 Taronga, 16, holds her two-year-old sister Teaborenga while standing in a flooded area in the village of Eita, South Tarawa, Kiribati on January 28, 2016. © UNICEF/UN056626/Sokhin

Natural disasters are dramatic proof of the rising perils of climate change, but there are other devastating forces at work as well. Slow onset climate change — for example desert expansion and sea-level rise — can do far more damage than a single storm.

The environmental factors that cause people to migrate are complex. Some fall squarely into the "crisis" category, while others are less visible. Slow onset climate change spurs conflict and its corresponding displacement, often due to dwindling resources. In Syria, drought was the initial driver, but political tensions and lack of opportunity ultimately led to today's Syrian refugee crisis. In the Sahel region of Africa, conflict is intensifying as natural resources become scarcer. 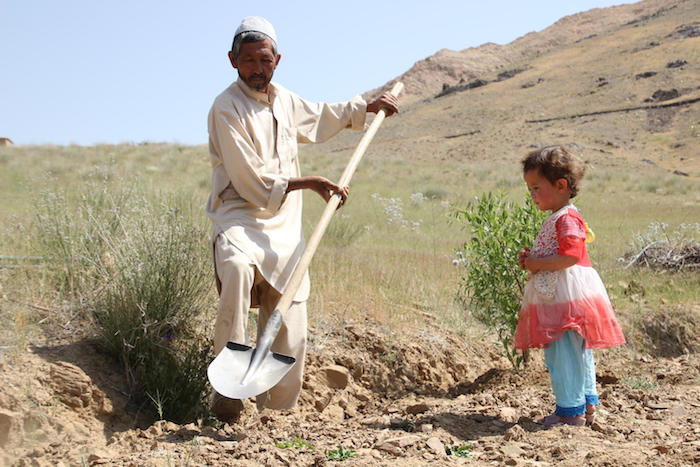 "The drought has destroyed everything," 55-year-old Khair Mohammad said in frustration in June 2018. The father of seven children is no longer able to feed his family in Daykundi Province, Afghanistan. To survive, his children have all dropped out of school to look for work. © UNICEF/UN0220450/Adrak

Migration is the greatest single consequence of climate change

The U.N.’s Intergovernmental Panel on Climate Change (IPCC) cited migration as the greatest single consequence of climate change as early as 1990. Most recently, in October, the IPCC enlisted a “final call” on rising global temperatures, as the planet will reach a threshold as early as 2030 if we don’t act now. The predicted consequences look familiar: extreme drought, rising sea levels, wildfires and food shortages. All of which, conclusively, have caused and will prompt further forced migration.

Droughts kill more people than any other single weather-related catastrophe and conflicts among communities over water scarcity are increasing. Over 1 billion people today have no access to safe water, and demand will increase by 30 percent by 2030. Desertification can be equally fatal and threatening: There are estimates that some 135 million people may be displaced by 2045 as a result of desertification.

Rumana, 2, is led by a community worker as she and her family are relocated to a safer, new extension area of the Kutupalong-Balukhali camp, part of the refugee settlement sheltering more than 800,000 Rohingya refugees in Cox's Bazar, Bangladesh in June 2018. © UNICEF/UN0219088/Modola

In Bangladesh, hundreds of thousands are routinely uprooted by coastal flooding and river erosion. Desertification in West Africa has empowered terrorists and displaced more than 4 million people. Rising sea levels in the Pacific and Oceania islands, where one in 10 have migrated in the past decade, leave residents trapped or threaten their very statehood. In America, thousands displaced by Hurricane Maria still have no housing.

Around the world, approximately 1 in 45 children are on the move. Nearly 50 million boys and girls have migrated across borders or been forcibly displaced within their own countries. Climate-related events and impacts already contribute to these staggering numbers — and they’re expected to grow. UNICEF is working to protect children on the move, providing water and sanitation, nutrition, medical care, education and more, and upholding their rights enshrined in the U.N. Convention on the Rights of the Child (UNCRC).

Photo at top: Children on the road in Bamba 2 Village on the outskirts of Bangui, Central African Republic, September 2018. Two-thirds of African cities face 'extreme climate risk,' according to a recent United Nations analysis. The three most at-risk African cities are Bangui, the Congolese city of Mbuji-Mayi and Liberia's capital, Monrovia. © UNICEF/UN0239557/Gilbertson VII Photo