Nearly 325,000 children under age 5 are suffering from severe acute malnutrition in Yemen. SAM is life-threatening, but it is also treatable. An appeal for support to help UNICEF reach every child in need.

Acute malnutrition rates among children in Yemen have hit their highest levels since 2015, according to the latest UN data — the result of over five years of conflict and socio-economic collapse, compounded by the COVID-19 pandemic.

“Yemen is on the brink of a catastrophic food security crisis," said Lise Grande, the UN's Humanitarian Coordinator for Yemen. "If the war doesn’t end now, we are nearing an irreversible situation and risk losing an entire generation of Yemen’s young children." A 7-month-old baby boy recovering from severe acute malnutrition at the UNICEF-supported 22 May Hospital in Sana'a, Yemen is given Ready-to-Use Therapeutic Food (RUTF). UNICEF is the world's leading procurer of the peanut-based, micronutrient-enhanced "miracle food" that has proven to be highly effective for treating children with SAM in clinical and community settings. © UNICEF/UNI312546/Alghabri

Nearly 350,000 children under age 5 in Yemen are suffering from severe acute malnutrition (SAM), which is life-threatening. At least a quarter of a million pregnant or breastfeeding women are also in need of treatment for malnutrition.

"Acute malnutrition can be treated and prevented with a package of key services," said Philippe Duamelle, UNICEF's Representative in Yemen. "But for that, we need urgent action and support."

Yemen has long battled with some of the highest malnutrition rates in the world. Ongoing response efforts by UNICEF and others, including emergency food assistance, have been able to prevent an even more dramatic deterioration. But now these hard-won gains are being lost, UN officials warn.

In addition to rising food insecurity, the pandemic has further strained Yemen's health care, education and social protection systems, all of which were already severely weakened by years of conflict. UNICEF and partners have been on the ground meeting humanitarian needs since hostilities first escalated, creating the world's worst humanitarian crisis. 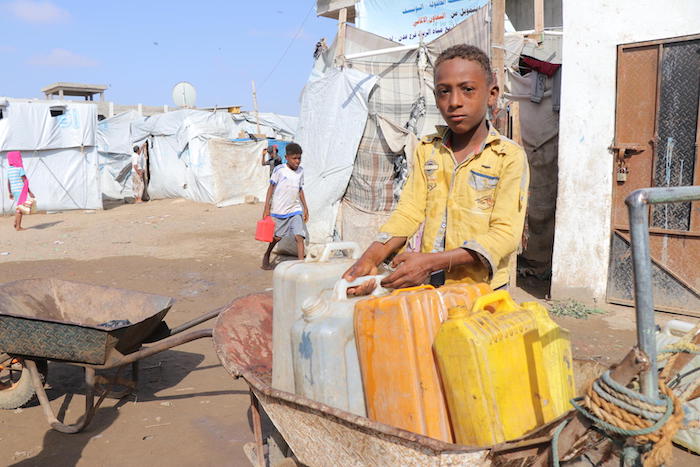 Mohammed, 13, has been living with his parents and siblings in the Ammar Bin Yasser camp for displaced families in Aden, Yemen, since 2018. © UNICEF/UNI324038/

"Yemen is a country beset by violence, pain and suffering," said UNICEF Executive Director Henrietta Fore. "The economy is in shambles. The health system has been on the verge of collapse for years. Countless schools, hospitals, water stations and other crucial public infrastructure have been damaged and destroyed in the fighting. Disregard for international humanitarian law is shockingly blatant."

UNICEF needs more than $50 million to urgently scale up its Yemen nutrition programs, including treatment for kids with SAM. Other urgently needed interventions are also under-funded, according to the most recent situation report.

"Children in Yemen need peace," said Fore. "An end to this brutal conflict is the only way they can fulfill their potential, resume their childhood and, ultimately, rebuild their country."

Over 24 million people in the country — 80 percent of the population — require some form of humanitarian assistance and protection. As the end of the year approaches, UNICEF's humanitarian appeal has received just $237 million of the $500 million required, a funding gap of almost $300 million.

Top photo: Food is scarce at the displaced persons camp in Yemen's Marib governate, where Moharram Al-Oshari, left, and his family have lived since violence forced them from their home. His 2-year-old daughter, Bulqis, holds a packet of Ready-to-Use Therapeutic Food, used to treat severe malnutrition. She was diagnosed by a UNICEF-supported mobile team that provides health care to children in the camp. © UNICEF/UNI337477