Fighting the Exploitation of Children in Travel and Tourism | UNICEF USA

Fighting the Exploitation of Children in Travel and Tourism

"I am a child and not a commodity" reads the sign held by a 14 year old victim of human trafficking. Unfortunately, the sexual exploitation of children is a problem that exists in all regions of the world and is closely tied to the travel and tourism industry.

With July now upon us, many travelers are preparing to embark on trips and getaways to destinations within the United States and across the world. While tourism provides benefits to local businesses and industries, an influx of visitors can also serve as a catalyst for the endangerment and exploitation of vulnerable local youth. A form of human trafficking, the “Sexual Exploitation of Children in Travel and Tourism”, referred to as SECTT, is a violation of children’s rights that has been found to occur in every region of the world.

SECTT is defined as the act of “sexual exploitation of children embedded in the context of travel, tourism or both” (The Global Study, p. 20). While the typical offender of SECTT is often thought to be a wealthy Western male, the Global Study on Sexual Exploitation of Children in Travel and Tourism, conducted in 2016, found that offenders include both domestic and international travelers of varying ages, races, and genders. Additionally, the Global Study demonstrated that children of all backgrounds and genders are vulnerable to SECTT, although indigenous children, displaced children and children living in poverty were found to be especially at risk. For all children who are victimized, the effects of sexual exploitation are physically and emotionally devastating, and can include sexually transmitted infections, pregnancy and substance abuse.

“SECTT not only consumes its child victims, it also fractures families and local cultures, and undermines the future prospects of entire communities.”

SECTT on the Rise:

Due to the secretive nature of SECTT, exact figures regarding the prevalence of SECTT are impossible to obtain. However, the comprehensive investigations done by the Global Study revealed the sexual exploitation of children to be increasing globally due to a number of factors. Firstly, in recent years, the number of travelers has increased tremendously across the globe. According to the United Nations World Tourism Organization, the number of international tourist arrivals grew from 25 million in 1950 to 980 million in 2011, and this figure is expected to nearly double to 1.8 billion by 2030. With this explosion in the number of travelers comes greater numbers of offenders, and thus, increased exploitation. In addition, the rising popularity of voluntourism (the trend in which tourists participate in volunteer work, often including working closely with disadvantaged children) and increased anonymity provided by recent developments in communication technologies were identified by the Global Study as trends that have left children even more vulnerable to exploitation.

Despite the increase in SECTT, a number of recent campaigns have demonstrated the power of NGOs and the travel industry to successfully fight the exploitation of children. In 2014, the End Child Prostitution in Asian Tourism organization launched a campaign in Brazil to fight the sexual exploitation of children during the World Cup. By displaying messages throughout Brazilian airports, hotels and restaurants, the campaign reached over 3 million travelers and provided a hotline to report suspected cases. That year, there was a 15% increase in the number of cases reported, and 75% of reports occurred during the World Cup. Reaching similar success through a different approach, country specific organizations like the Fundación PANIAMOR-ECPAT Costa Rica have worked directly with children and families living in cities with high levels of tourism and provided education and training to prevent sexual exploitation. Additionally, UNICEF works within the government sector, as well as with local communities, schools and faith-based organizations to spread awareness about, and prevent, the exploitation and trafficking of children.

What Can You Do?

Within the U.S., the National Human Trafficking Hotline provides a confidential, 24/7, toll-free number which can be used to report tips or suspected cases of human trafficking. 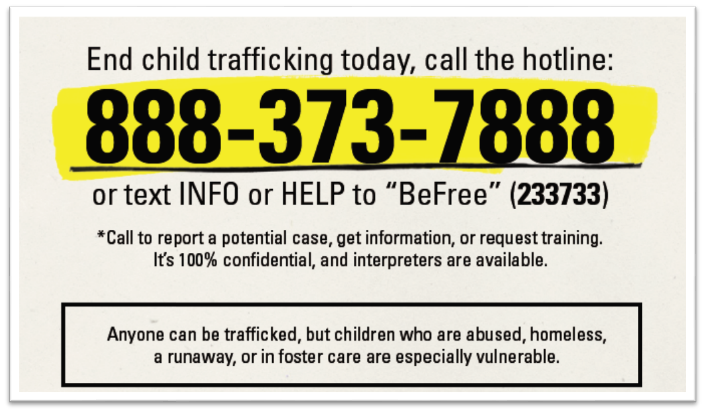 When choosing between the abundant hotels, airlines, travel agencies and tour outfitters available to travelers, commit to supporting companies that have made a stand against the exploitation of children by becoming members of the Code of Conduct for the Protection of Children Against Sexual Exploitation in Travel and Tourism. The Code, an initiative within the tourism industry, provides “essential steps” that organizations can take to protect children, which include:

In becoming members of The Code, organizations ranging from small hostels and surf camps to global corporations commit to following these steps to fight the sexual exploitation of children. By choosing to support these organizations, you can play a role in protecting the rights of children and fighting sexual exploitation within the travel industry.

The End Trafficking project is UNICEF USA’s initiative to raise awareness about child trafficking and mobilize communities to take meaningful action to help protect children. We do this by conducting workshops, facilitating film screenings, advocating for federal and state legislation and educating the American public on UNICEF’s work to protect children globally.