If you or someone you know is in an unhealthy or abusive relationship, you are not alone. Please contact the National Domestic Violence Hotline at 1-800-799-SAFE (7233) or TTY 1−800−787−3224 for support. Resources are available in Spanish and for those that are deaf, deaf-blind, or hard of hearing. If you are in immediate danger, contact 911.

Human trafficking takes on a variety of forms, and may intersect with domestic violence in multiple ways. For example, when an individual is trafficked by an intimate partner, family member, or other member of the household, domestic violence often also occurs. Additionally, domestic violence at home may become a 'push factor' that causes someone to become vulnerable to trafficking. Even their definitions have similarities (bolded below), including overlapping forms of experienced violence and abuse.

Human trafficking is defined using an "A-M-P Model," meaning that it is the:

The Department of Justice defines domestic violence as:

"a pattern of abusive behavior in any relationship that is used by one partner to gain or maintain power and control over another intimate partner.  Domestic violence can be physical, sexual, emotional, economic, or psychological actions or threats of actions that influence another person. This includes any behaviors that intimidate, manipulate, humiliate, isolate, frighten, terrorize, coerce, threaten, blame, hurt, injure, or wound someone." 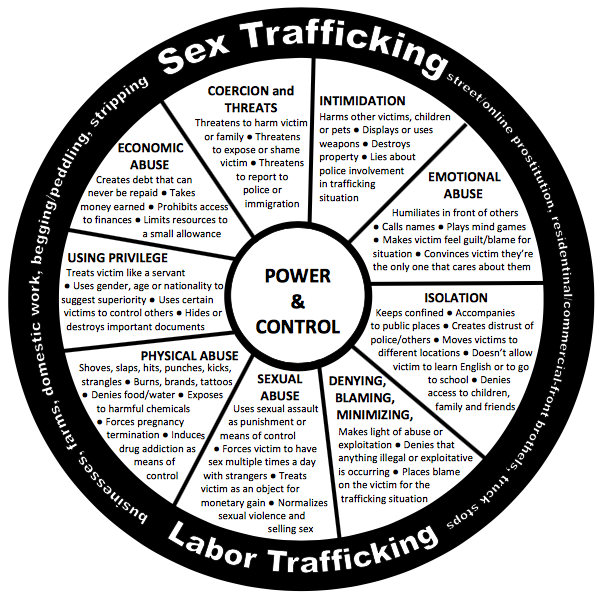 The Polaris Projects' “Human Trafficking Power and Control Wheel” (above) depicts the methods employed by a trafficker to maintain influence over a victim. This model was adapted from research on domestic violence and highlights shared experiences of domestic violence and trafficking survivors. When a trafficker is exploiting an intimate partner or family member, the familial relationship itself may be used to perpetuate an exploitative power imbalance. Sex traffickers may also utilize language that mimics familial relationships, such as insisting that a victim refers to him as ‘Daddy’ or other individuals he is exploiting as the victim's ‘family.’ Use of this language is meant to reinforce loyalty and strengthen the psychological ties between a trafficker and victim. When paired with other forms of or threats of abuse, leaving an exploitative situation becomes incredibly difficult.

In addition to shared experiences of abuse and manipulation, domestic violence is a demonstrated 'push factor,' making individuals vulnerable to trafficking. The 2009 U.S. State Department Trafficking in Persons Report cited a London-based study, which found that almost 70% of adult female trafficking victims experienced domestic violence prior to being trafficked. Children exposed to domestic violence in the home may run away in order to avoid abuse; research indicates that runaway and homeless youth are at particular risk of being trafficked, with the National Center for Missing Exploited Children showing that one in six of reported runaways indicated signs of experiencing sex trafficking.

In the United States alone, approximately 12 million people will experience intimate partner violence this year. Abusive power dynamics are often further exacerbated in cases of child marriage. According to the International Labour Organization, forced marriages have already placed over 5.5 million children—the majority of them girls—at increased risk of experiencing forced labor, sexual abuse, and all forms of domestic violence. Regardless of age, identifying trafficking in the context of a married relationship is often difficult due to cultural norms surrounding domestic duties and gender roles. These social assumptions may mask the presence of trafficking, especially forced labor, within married couples.

Note: Much of this article has been drawn and adapted from the presentation, "Human Trafficking: Intersections with Domestic Violence," by the National Human Trafficking Resource Center (NHTRC).