Across Syria, families struggle to maintain traditional celebrations, to give their children a sense of normalcy and hope for the future.

Children usually wear new clothes on Eid-al-Fitr, the feast marking the end of the fast of Ramadan. They receive gifts, play happily and visit their extended families.

But for Basma Ourafli, a UNICEF Communication Officer in Aleppo, Syria, memories of Eid include children standing in long lines under the scorching sun, waiting to collect water for their families, and the constant fear of mortar fire.

"I recall during Ramadan last year, as we were ready to break our fast, intense shelling started," she wrote in 2016. "It was dark, and we were bewildered, not knowing whether to flee or not. The only question running through my mind was, 'Will we survive the day?'"

At midday during #Ramadan children collect water from a tank at Teshreen collective shelter in #Aleppo, #Syria pic.twitter.com/cvzTGnabQq

After eight years of conflict in Syria, children are paying the heaviest price. More than 5.5 million children require some form of humanitarian assistance.

Across the country, families struggle to maintain traditional celebrations, to help their children regain a sense of normalcy and to give them hope for a better future. There may not be money for gifts this year, but there are memories of better times, and hopes for a brighter future. 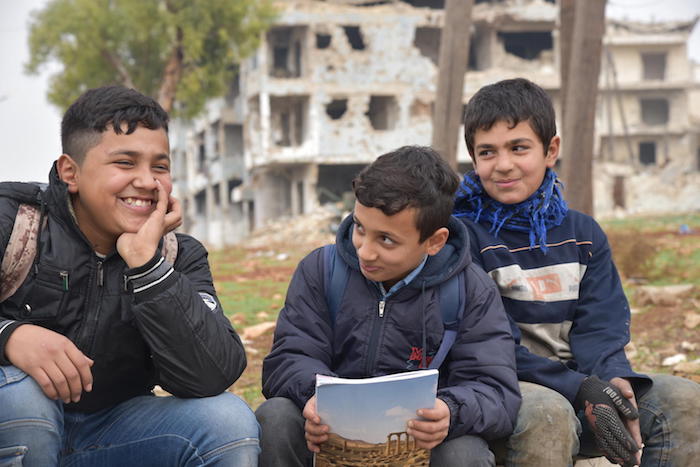 From left: Hussein and Mohammed are enrolled in school in Aleppo, but their friend Mustafa, 12, dropped out to help support his family. © UNICEF/UN0287094/Grove Hermansen

So much has changed for Syria's children. Many have missed out on years of school, because their families were displaced by the fighting. When their neighborhood became too dangerous, Mustafa, 12, (pictured above, far right) and his family left Aleppo to live with his uncle. Now they've returned, but instead of being back in school, Mustafa is working in a plastic factory to help support his family.

The heavily bombed city of Aleppo is full of dangers, from mortar and rocket fire to collapsing war-damaged apartment buildings. Mustafa and his friends have to be very careful to avoid landmines. "My parents tell me to avoid walking around," he said. "I have to go straight from where we live to work and back. And they say that we cannot pick up things." 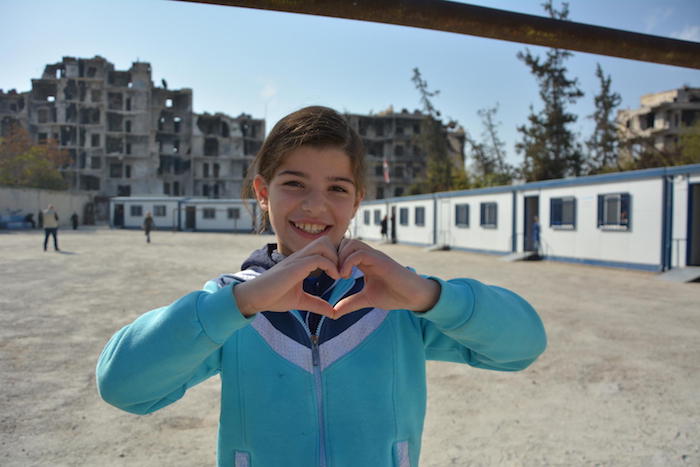 Wahida was 10 when her parents were killed by shelling in 2016. Displaced twice, she lost a year of school before enrolling in UNICEF-supported Maysaloon School in eastern Aleppo. The school building was damaged, so UNICEF set up prefab classrooms in January 2017 to help students get back to learning as soon as possible. © UNICEF/UN0145457/Charbonneau

"I wish that Aleppo could be like before the crisis, with no damage," 11-year-old Wahida (above) told UNICEF staff in 2017. Both Wahida's parents were killed by shelling in 2016.

A student at UNICEF-supported Maysaloon School in eastern Aleppo, Wahida dreams of becoming an Arabic teacher when she grows up. "I wish I could return to my old school," she said. "I want all children in Syria to be safe."

Top photo: Children play at the Eid theme park as they celebrate Eid-al-Fitr, which marks the end of Ramadam, in beseiged East Ghouta, rural Damascus, Syria in June 2017. Despite being surrounded by destruction and war, children in East Ghouta celebrated Eid, restoring a sense of normalcy into their lives. © UNICEF/UN069963/Al-Mohibany