For Children Caught in Conflict in DRC, Education and Hope for Peace

Faced with ongoing violence, acute food shortages, malnutrition, natural disasters and disease, children in the Democratic Republic of the Congo are growing up in one of the world's most difficult and long-running humanitarian crises. Decades of intercommunity violence — including attacks on civilians — have forced nearly 5 million people from their homes in eastern DRC.

On April 5, 2022, UNICEF Executive Director Catherine Russell visited the Rhoe camp for internally displaced people in Ituri province, an area hard-hit by conflict. Approximately 63,000 people — including 36,000 children — have taken refuge in the camp. Many arrived in November 2021 after being chased out of another camp for the internally displaced in the nearby town of Drodro that was attacked by men wielding machetes.

At Rhoe camp, Russell visited the UNICEF-supported school and met with children who had come face-to-face with the brutal violence. Fourteen-year-old Blukwa (his name has been changed to protect his identity) described how he narrowly escaped being killed in Drodro, only to see his best friend lose his life to the attackers.

"[Blukwa] told me that after witnessing the murder of his best friend, he wanted to die as well," said Russell. "No child should ever experience such tragedy and horror. Over the last two decades, countless children in DRC have suffered terribly due to conflict and persistent attacks on civilians. They need an urgent political solution to this crisis so they can live in peace." 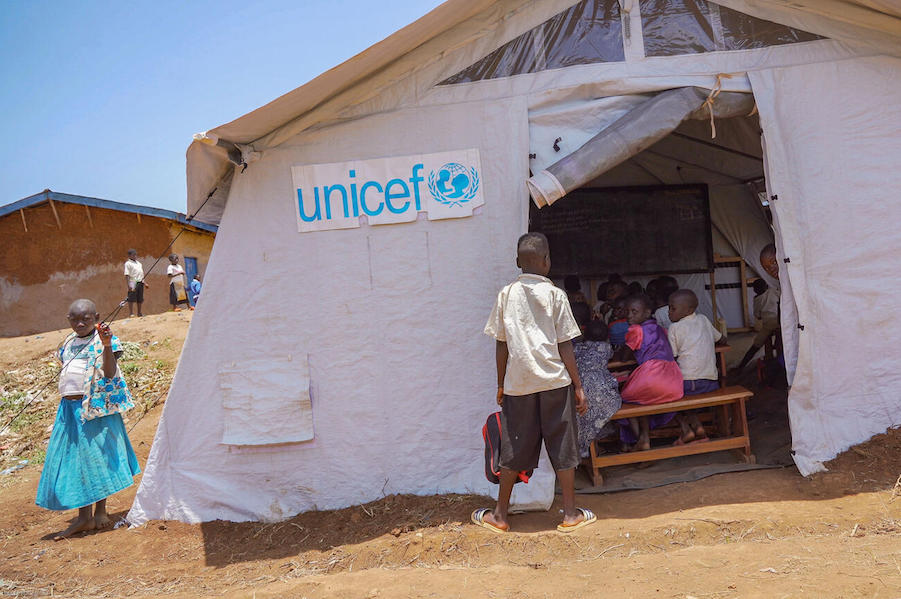 Blukwa, above looking into a UNICEF temporary classroom, is regularly attending school in the camp. With psychosocial support, he is gradually coming to terms with the trauma of seeing his friend killed. He and 60 other children, all separated from their families during the attack in Drodro, have since been reunited with their loved ones through the work of AJEDEC, a Congolese NGO supported by UNICEF.

"People are weary of these conflicts that never end," said Russell. "This problem is still here and these people are still suffering, and we need to help them."

UNICEF has been present in the DRC since 1963, reaching the most disadvantaged children, defending their rights and helping them reach their full potential. Your contribution can make a difference to children in need. Please donate.