“[Cyclone Winston] is truly a disaster for Fiji,” explains UNICEF Pacific Representative Dr. Karen Allen. “It is now clear that a staggering 40 percent of Fiji’s children are very much at risk. The immediate and long-term implications for their health, safety, education and development are colossal.” 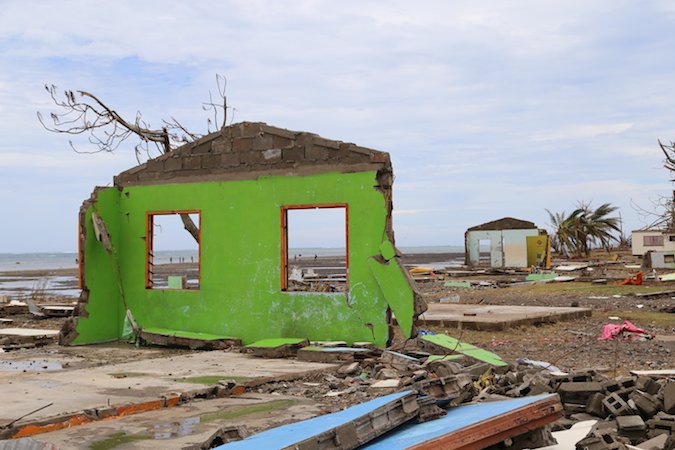 The Category 5 storm — which hit Fiji on February 20 and was the strongest cyclone ever to strike this Pacific island nation — has left a trail of devastation in its wake. 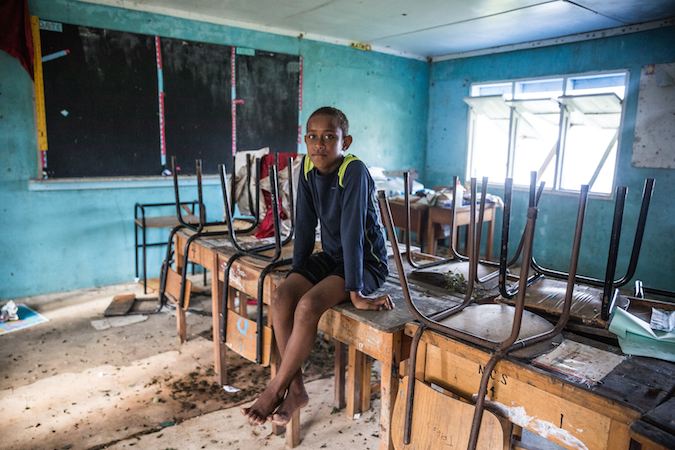 Eremodo, 12, sitting in his damaged school on Vuaki Island, says: "I came here to help out [my] teacher to clean the classroom so we can have our classes soon again. My school bag is missing; I don't even have a pen to write." © UNICEF/Sokhin 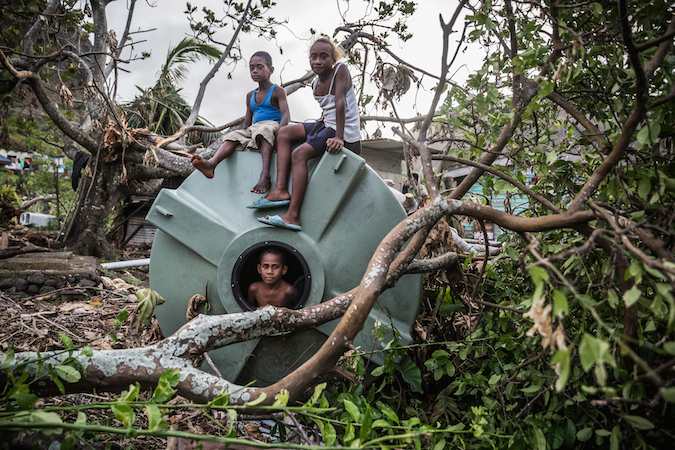 After Cyclone Winston's record-breaking winds flattened thousands of trees and homes, children hang out in a downed water tank. © UNICEF/Sokhin

Dr. Allen added: “We have met far too many children who have lost literally everything; their possessions, their home[s], the family’s crops that they depend on for food and possibly income, their school[s] and their community health clinic[s]. Many of these children don’t have safe drinking water, power or a roof over their heads. They need urgent and comprehensive assistance.” 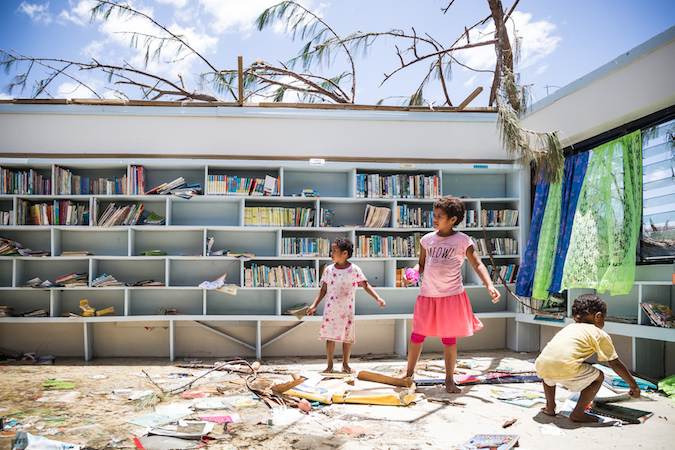 Eight days after the storm, children play in the library of the severely damaged Nabau District School in Fiji's Ra Province. © UNICEF/Sokhin

Cyclone Winston’s devastation becomes even clearer when you talk to Fiji’s children.

Thirteen year-old Adi, from Yaqeta village in the outer Yasawa Islands, recalls the cyclone: "I saw our house starting to collapse. I grabbed my brother and we ran. I was so scared. We ran from house to house three times. Now, I am heartbroken to see the house where I was born and raised in, in pieces." 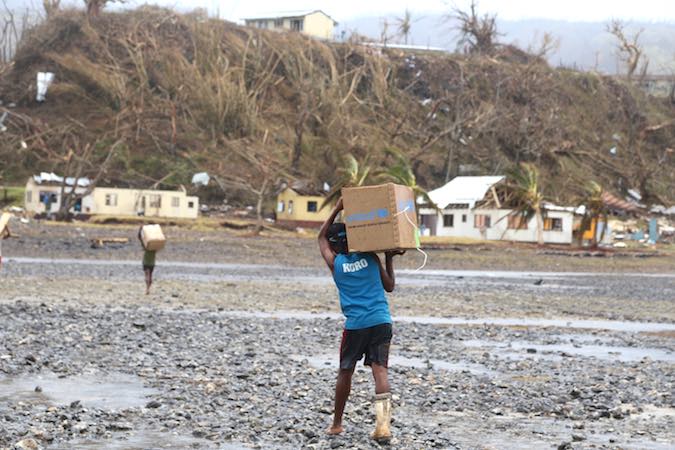 UNICEF continues to provide much-needed supplies — such as water, sanitation and hygiene kits, school tents and teaching materials — to ensure that thousands of Fijians have access to safe water and that children can return to school.

In addition, UNICEF and its partners have initiated key child healthcare activities, such as providing psychosocial support for post-traumatic stress and broadcasting urgent public health messages.

UNICEF staff are also assisting Fiji’s government and other partners with emergency procurement, logistics and technical and cash assistance to strengthen service delivery.

After Cyclone Winston (a Category 5 storm) left Fiji earlier this week, thousands of families started to recover from the devastation, including searching for loved ones, returning to—and in some cases rebuilding—their homes, and beginning the huge task of clean up and reconstruction.  All parts of the country experienced strong winds, tidal surges, flooding, power cuts and/or water cuts.

UNICEF spoke to children and their families across the country to understand the cyclone's impact.

Makereta N., 13, for instance, sat in her now flooded bedroom and told UNICEF: “It was the most terrifying night of my life. Our family had to move to three different places during the storm at night.” 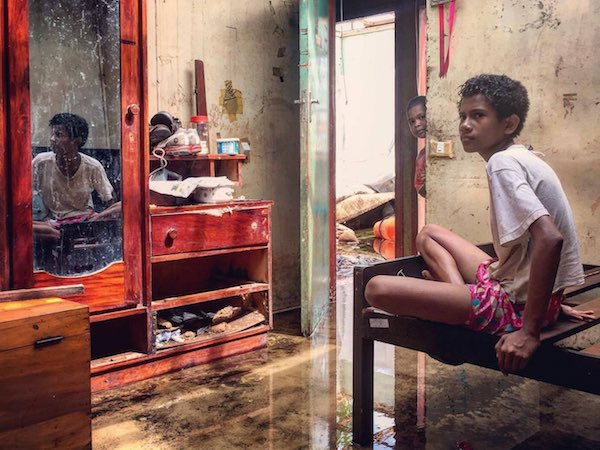 Makereta N., 13, sitting in what used to be her bedroom after it was devastated by Cyclone Winston, which hit Fiji on February 20, 2016. © UNICEF

For several years, UNICEF has supported emergency preparedness and disaster response training in Fiji for district health and education officers. Last year, UNICEF facilitated training for the Ministry of Women, Children and Poverty Alleviation to protect children in emergencies. These skills are now being put into practice in evacuation centers across the country.

In addition, UNICEF had already pre-positioned emergency supplies in Fiji, which are now being distributed.

However, UNICEF urgently needs financial support for freight and logistics, especially for the delivery of supplies to seriously affected outer islands, some of which are accessible only by boat.

"We certainly felt the impact of TC Winston in Suva with destructive, howling winds and the sound of rivets lifting from roofs a constant throughout the night.

We can't say for sure yet how the rest of the country fared but rapid assessments will be undertaken by the Fiji Government to determine the full impact and what response will be required. It is likely that smaller villages across Fiji will have suffered the most, given their infrastructures would be too weak to withstand the power of a category 5 cyclone. 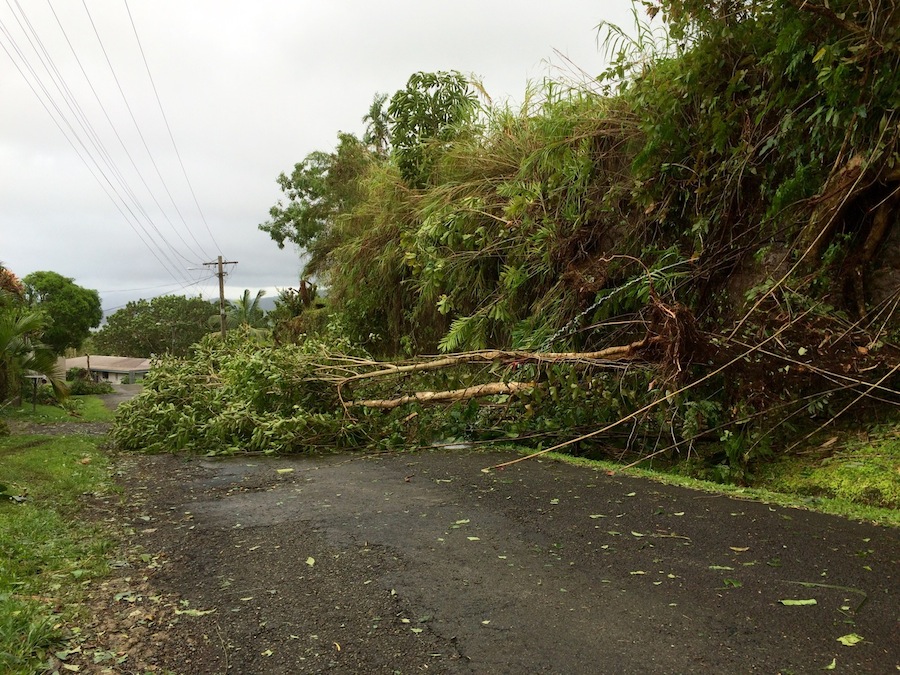 Downed trees are a common sight in the aftermath of Cyclone Winston's ferocious landfall in Fiji. Assessments of damage and humanitarian needs are ongoing. © UNICEF

Families may have lost their homes and crops leaving them without shelter, food and a livelihood. Those families will have lost everything. There is also considerable risk for those that live by the sea or rivers as flash flooding and river flooding could occur due to heavy rains.

Preparedness messages from all sectors of society ensured people were informed and as prepared as they could be. Just last week 25 teachers and senior officials from the Ministry of Education were trained by UNICEF as first assessors and responders so their training will immediately be put to use.”

Tropical Cyclone Winston hit the Republic of Fiji at 2 a.m. February 20, battering the islands with winds of almost 162 miles per hour and gusts of nearly 200 miles per hour. Listed Severe Category 5, the cyclone is the worst to land on the region in 50 years, and according to CNN is "the strongest ever recorded in the Southern Hemisphere."

About 18 hours before Cyclone Winston touched ground, NASA captured an image of the storm over the South Pacific Ocean, and warned of  a "15 nautical mile wide eye circled by a thick band of thunderstorms." 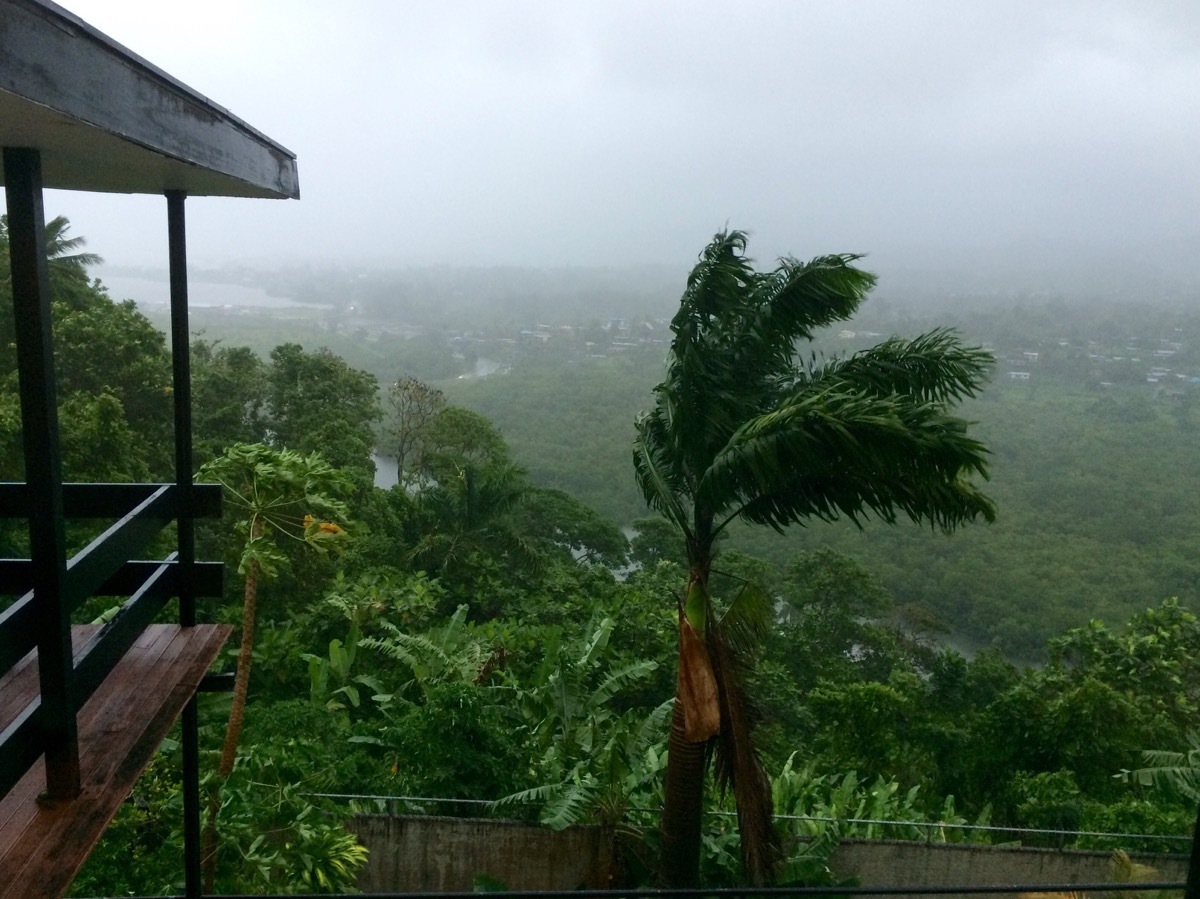 Preparing in advance for the cyclone

UNICEF has mobilized in advance of the storm, broadcasting warnings to the residents of the islands and positioning emergency supplies in Nadi and the capital of Suva: health kits, water containers and purification tablets, tarpaulins and school tents. The Government of Fiji has activated emergency operation centers and 758 evacuation centers, and closed the two major airports. 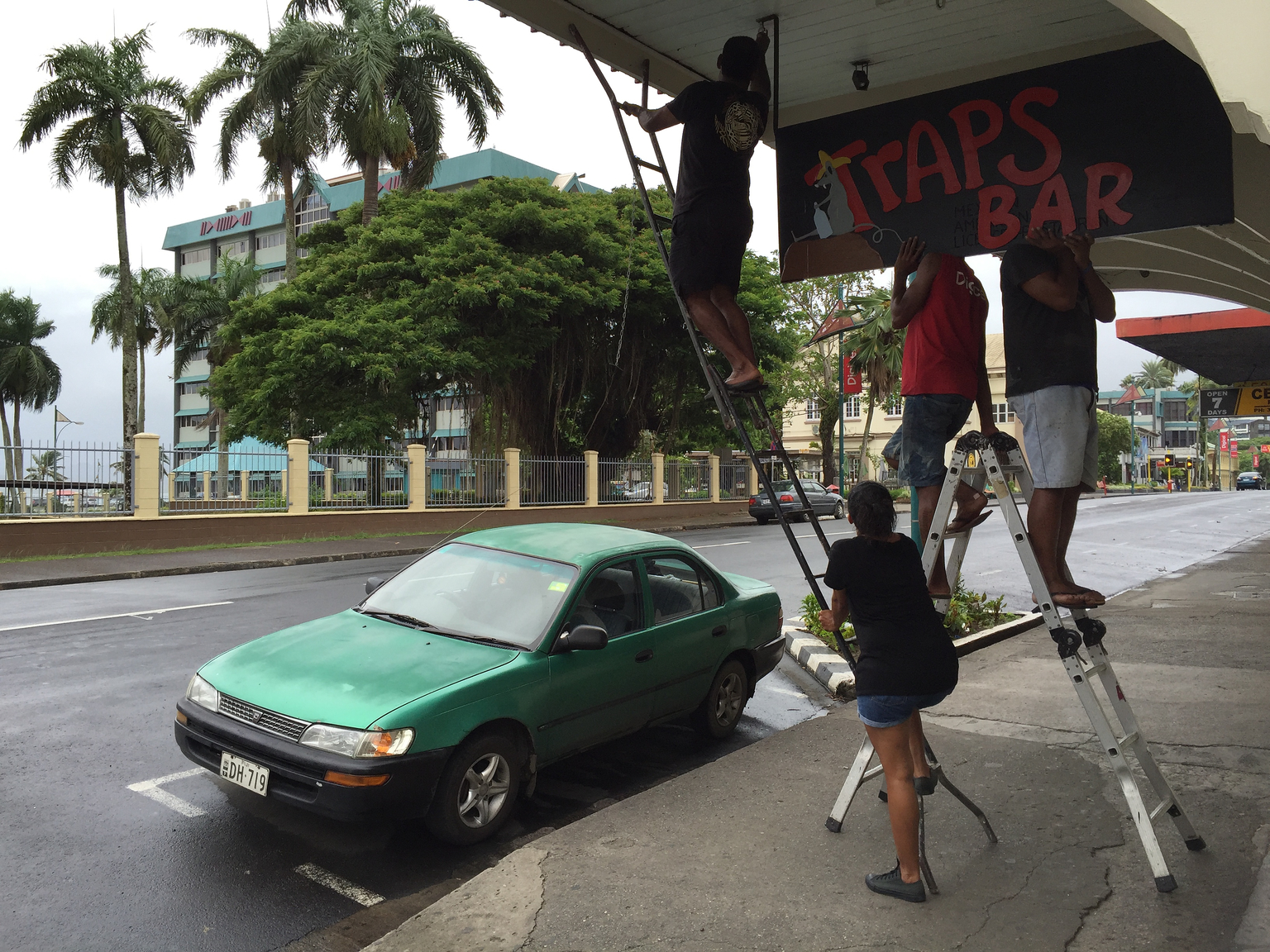 "Winston has already impacted other Pacific nations so here in Fiji we are hoping for the best, but preparing for the worst," said UNICEF Pacific communications specialist Alice Clements from her base in Suva, Fiji.

"For the last few days we have been sharing emergency preparedness messages encouraging people to take precautions ahead of the cyclone hitting this weekend."

UNICEF has also worked directly with the Fiji government through the Get Ready initiative, which encourages people to be fully disaster prepared and resilient through household preparedness kits, family immunization, water safety and information sharing.

Founded in 1946 to help children suffering in the aftermath of World War II, UNICEF provides children and families with disaster relief whenever emergencies strike. Learn more about UNICEF's humanitarian response to provide aid and relief to children in need. Or, donate now to help UNICEF aid children caught in natural disasters.