Amid Migration Surge, UNICEF Acts to Protect Kids at Every Step | UNICEF USA

Amid Migration Surge, UNICEF Acts to Protect Kids at Every Step

A sharp increase in the number of children traveling through the dangerous Darien Gap, the only land route north from South America, prompts swift action by UNICEF and partners to meet urgent humanitarian needs, part of a larger regional emergency.

More and more children are migrating through the Darien Gap, a dangerous stretch of jungle between Colombia and Panama, prompting UNICEF to scale up relief programs to respond to the growing needs of those transiting through the area.

Children now make up over a quarter of all migrants passing through the dangerous Darien Gap. © GIF by Tong Su/UNICEF USA

UNICEF is also urging governments to do more to both address the root causes that lead families to migrate in the first place and to promote integration of migrants within host communities — both long-standing pillars of UNICEF's mission in the region.

"Unless the international community provides more humanitarian support to address the root causes of migration, more and more families with children are likely to be left with no other option but to venture on this perilous journey through the Darien Gap in search of a better life," said Jean Gough, UNICEF Regional Director for Latin American and the Caribbean.

Over 46,500 migrants from a number of different countries of origin — including roughly 6,240 children — have braved passage through Darien, the only land route north out of South America, since 2017, coming from countries as diverse as Haiti, Bangladesh and Somalia. And they are expected to keep making the week long, 60 mile-plus trek, despite the route's treacherous terrain, despite the insects and other wildlife, despite the presence of armed guerillas and drug traffickers — and despite COVID-19.

In the Darien Gap, the only land route north from South America there are multiple threats to migrants' safety, but more and more families are willing to risk it for a chance to escape violence and poverty in their countries of origin. © GIF by Tong Su/UNICEF USA

The number of children making this journey has increased more than 15-fold since 2017. Children and adolescents — now accounting for more than a quarter of those migrating through Darien, up from just 2 percent four years ago — and pregnant women are especially vulnerable.

I've seen women step out of the jungle carrying their babies in their arms after walking for more than seven days without water, food or any kind of protection. — Jean Gough, UNICEF Regional Director for Latin American and the Caribbean

“I’ve seen women step out of the jungle carrying their babies in their arms after walking for more than seven days without water, food or any kind of protection,” Gough said following a two-day field visit to the Darien border in March.

“These families are pushing their own limits and putting their lives in danger, often without realizing how much of a risk they are taking. Those who manage to eventually cross this perilous border are physically and mentally devastated. Their humanitarian needs are immediate and immense." 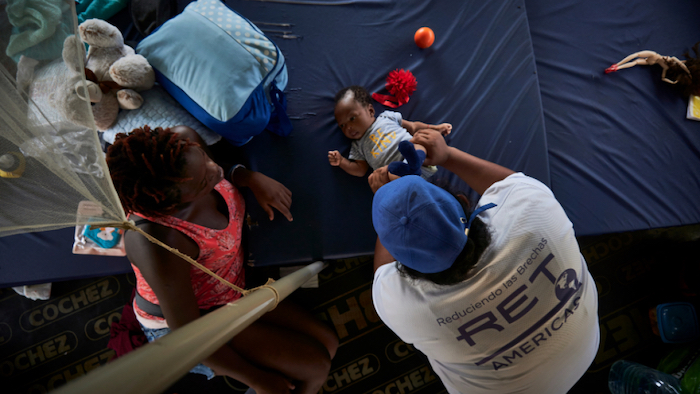 A specialist with RET Americas, a UNICEF partner providing services to migrant children and families on the Panama side of the Darien Gap, demonstrates with baby Jhon early stimulation techniques and other ways to ensure healthy development as Jhon's mother Rael, left, looks on. Rael is one of hundreds of pregnant women who made the dangerous trek from Colombia to Panama in 2020. Read Rael's story (in Spanish). @ UNICEF Panama 2020/Urdaneta

Host communities facing their own hardships are overwhelmed, Gough added. The village of Bajo Chiquito, for example, a community of 400 on the Panama side of Darien, is currently hosting about 1,400 migrants.

COVID-19 pandemic lockdowns and mobility restrictions implemented in 2020 to curb the spread of the novel coronavirus depressed migration flows for a time, but did not stop them entirely. Most migrants are families who are fleeing violence and poverty exacerbated by the socioeconomic impacts of the pandemic. Many face unemployment, racism and xenophobia along the way.

In March 2020, an 8-year-old named Mickenson journeyed through Darien with his father Enau, who is originally from Haiti and migrated to Venezuela in 2011, risking swift currents, silty trails, jaguars, snakes and criminal gangs to migrate north in hopes of a better life.

Then international borders closed in response to the COVID-19 pandemic, stranding them in La Peñita, along with about 1,700 other people who had come through the Darien Gap, about one-third of them children. 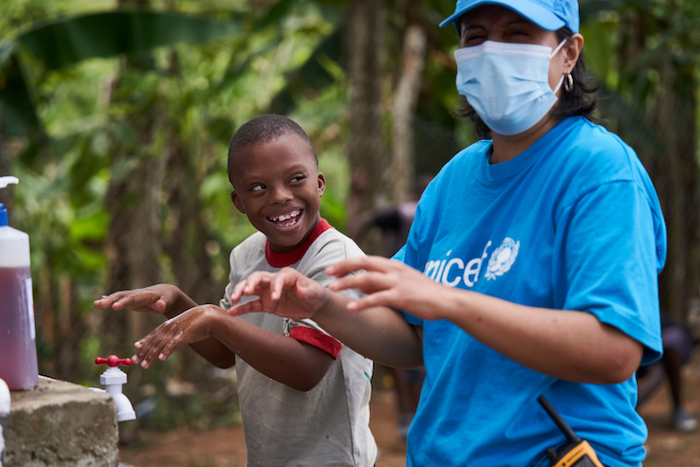 Mickenson, 8, learns the correct way to wash his hands in a UNICEF Child-Friendly Space at the Migrant Reception Station in La Peñita, a rural community on the Panamanian side of the Darien Gap. In March 2020, Mickenson crossed the Darien jungle with his father Enau, ending up in La Peñita — staying for eight months while borders were closed due to COVID-19. Read Mickenson's story (in Spanish). © UNICEF Panama 2020/Urdaneta

UNICEF and partners are helping to meet the basic needs of migrants staying in La Peñita and elsewhere on the Panama side of Darien, providing safe water, food and health care. UNICEF is also supporting Child-Friendly Spaces where kids can get psychosocial support through a range of games, art projects and other activities, math homework and other forms of learning support, and instruction in COVID-19 prevention.

Every migrant child spending time at the Child-Friendly Space in La Peñita has experienced some form of trauma migrating through the Darien Gap, said Mónica García, a UNICEF staff coordinator. “Children and adults killed, by the river or eaten by an animal. A woman who dies giving birth in the jungle and the newborn baby survives her. Those are the things they live and see before arriving here." 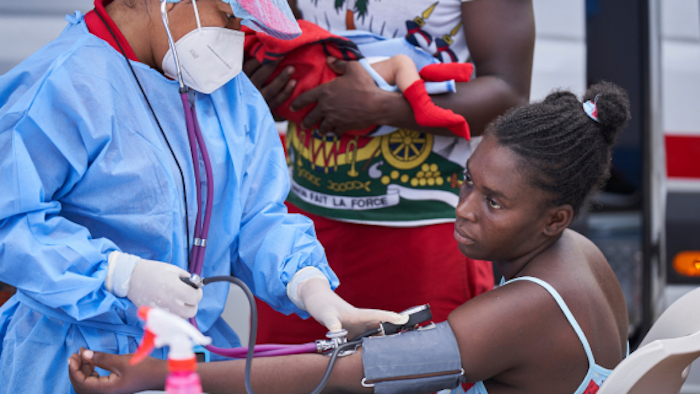 Franchette, 31, receives postpartum maternity care from a UNICEF-supported mobile health team in La Peñita, Darien, Panama, while her husband holds their baby, born a few days before at the migrant reception center. The family had journeyed through the Darien Gap when Franchette was 36 weeks pregnant. After a few days their shoes fell apart so they walked barefoot most of the way. Still, they witnessed far worse things befall others, like the mother holding two small children who was carried away by a strong current. Franchette's child was one of 85 babies born at the migrant reception center in La Peñita since the start of the COVID-19 pandemic. "The pandemic has deteriorated the mental health of the migrant population, particularly women," said Margarita Sánchez, a UNICEF official in Darien. Read Franchette's story (in Spanish). @ UNICEF Panama 2020/Urdaneta

UNICEF is providing for children and families on the move at and around the Darien border in coordination with the International Organization for Migration, the UN Refugee Agency (UNHCR) and the Panamanian National Frontier Service. From October 2019 to February 2021, over 15,600 people, including 3,367 child migrants, refugees and members of host communities, received humanitarian assistance from UNICEF and partners.

The efforts are an extension of UNICEF's larger emergency response to migration in the region. Hundreds of thousands of people have been on the move in recent years along the Northern Central American migration corridor that includes Guatemala, Honduras, El Salvador and Mexico, seeking protection within their countries or crossing international borders to flee "a tangle of dangers," as UNICEF Executive Director Henrietta Fore noted in a recent statement.

UNICEF estimates that there are over 10 million people in need of urgent assistance in the region, and that one in three of the displaced are children. 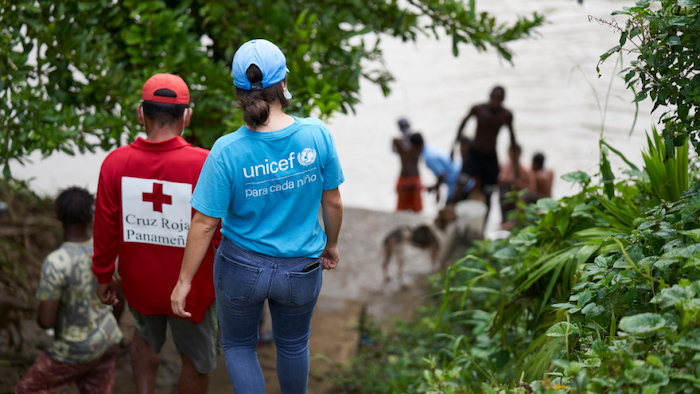 Margarita Sánchez from UNICEF and Arsenio Ballester, a water specialist with a UNICEF partner agency, approach the Chucunaque River to collect water to be purified and then provided to migrant families for drinking. @ UNICEF Panama 2020/Urdaneta

Since the beginning of this year, Fore noted, there has been an “alarming surge” of migrant children arriving in Mexico from Central America — from 380 to nearly 3,500, a nine-fold increase — and half of them are travelling without a parent or other adult.

"These children arrive after perilous journeys of up to two months —alone, exhausted and afraid," Fore said. "Every step is a risk of violence and exploitation, recruitment to gangs and trafficking.”

Two years ago, a young woman in San Pedro Sula told me, 'We are not migrating to have nicer lives — we are migrating to survive.' — UNICEF Executive Director Henrietta Fore

COVID-19 lockdowns and restrictions have made a bad situation worse by keeping 11 million children out of school, "missing out on all the hallmarks of a normal childhood — learning, safety, routine, hope,” Fore said, reiterated UNICEF’s commitment to “making mobility safe” and ensuring that basic needs are met. 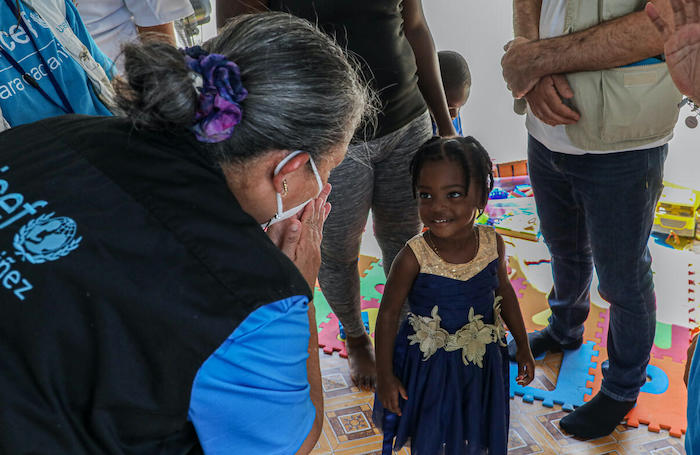 Jean Gough, UNICEF Regional Director for Latin America and the Caribbean, meets Maleyles, 3, at a UNICEF-supported Child-Friendly Space at the migrant reception center in San Vicente, Darien, Panama, during a two-day field visit to the Darien border. Maleyles traveled through the Darien Gap with her parents, a traumatic trip that lasted for seven days. © UNICEF/UN0433692/Moreno Gonzalez

Working with country teams and other partners in countries of origin, transit and destination, UNICEF is delivering mobile health care, including immunizations and nutrition screening and support; providing shelter and safe spaces for mothers and children to access physical and mental health care; and creating alternative pathways to education for out-of-school children. UNICEF also conducts family tracing and reunification for child migrants to connect them to family members.

As part of its ongoing efforts to address the root causes of migration, UNICEF is also working in countries of origin to:

During a virtual briefing on April 20, Fore called on the global community to help UNICEF do more. She urged support for the UN Commission for Latin America and the Caribbean's comprehensive development plan for Northern Central America — "an important opportunity to build needed infrastructure, spur economic activity and address the root causes of migration" — and for the Mexican government as it implements legal reforms to protect and support migrant children and phase out detention.

"Help us amplify our call to all states to guarantee the rights of people on the move — within countries and across borders," Fore said.

"A child is a child first. Their rights do not disappear when they’re pushed from their homes. They need and deserve support — whether travelling alone or with their families — at every step."

Support UNICEF's efforts to save and protect migrant and refugee children. Your contribution can help make a difference.

Top photo: A father and child arrive in Bajo Chiquito, Panama, after crossing the Darien Gap, one of the most dangerous migration routes in the world. The number of children migrating making this journey between Colombia and Panama has increased more than 15-fold since 2017.© UNICEF/UN0433742/Moreno Gonzalez