After Years of Civil War, Child Marriage Is on the Rise in Yemen

In a nation on the brink of social collapse, a campaign to protect girls from early marriage stalls.

When Nujood Ali walked into a courthouse in Yemen to demand a divorce from her 30-year-old husband in 2008, the judge looked at the 10-year-old girl and said in astonishment, "You're married?!" Less than a month later, 9-year-old Arwa Abdu Muhammad Ali ran to a local hospital and complained that she was being raped and beaten by her husband, 35.

The stories of Nujood, Arwa and other girls like them spurred international and local activists to start a campaign calling for an end to the longstanding tradition of child marriage in Yemen, encouraging girls to stay in school and proposing 18 as the minimum age for marriage.

Yemen is in crisis

Today, that trend is reversing. A deadlocked civil war has exacerbated an already critical economic and social situation. Even before the conflict escalated, Yemen faced widespread poverty, food insecurity and lack of health services. Today, the country's infrastructure has been destroyed, leaving more than 20 million people — including more than 11 million children — in Yemen without health care, safe water and adequate sanitation. A cholera outbreak poses a major health risk. More than 80 percent of the country's population are in urgent need of humanitarian assistance and protection.

In the midst of this national catastrophe, desperate families are increasingly turning to child marriage: Today, more than two thirds of girls are married off before the age of 18, compared to 50 percent before the crisis began.

Parents marry off their daughters to be relieved of the cost of their care, or because they believe a husband's family can offer better protection. Families also sell their daughters for dowry payments to cope with conflict-related hardship. Child brides are especially common in parts of Yemen that host large numbers of displaced people: Millions of Yemenis have been forced out of their homes by the war.

Married off when she was only 13, a young girl in Yemen speaks out against the practice of early marriage and its harmful effects on girls. "Mother would beat me whenever I refused marriage," she says. "When I got married, I got sick. They took me to the hospital. I kept bleeding for two months. Once I wanted to stab myself, but my husband stopped me."

Yemen, the poorest country in the Middle East, does not criminalize marital rape. It remains one of only a handful of nations in the region without a legal minimum age for marriage.

Noora Al Shami was excited to get married in 1989, just after her 11th birthday. She had no idea what was in store for her after her wedding to a distant cousin in his 30s in the Yemeni port city of Al Hudaydah. "I was allowed to wear adult clothes, to put on jewelry, to accept presents," she told The Guardian in 2013. "What had not dawned on me was that I would be abused by a violent criminal."

The rise in child marriages is a clear indication of the war's disproportionate impact on children. Child marriage can cause immense physical and psychological harm to girls. Girls forced into early marriage are denied a childhood. Their educations are disrupted and their opportunities are limited. Child marriage is a fundamental human rights violation; it increases a girl's risk of violence and abuse, and jeopardizes her health.

"I was a child dreaming of everything good," a young Yemeni girl who was married at 13 told a UNICEF video crew (see video above). Her husband was 20 years older. "Many people say if a girl is eight years old, she is good for marriage. Girls are always wronged," she says, starting to cry. "I wish I could finish my education. But I was destroyed by early marriage. They destroyed my life." 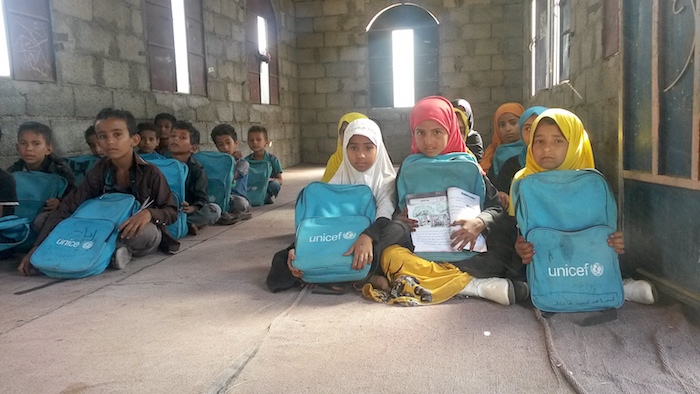 Third-grade students, between the ages of 8 and 10, sit on the floor of a temporary classroom in Taiz, Yemen. The number of out-of-school children has ballooned in Yemen, the Middle East's poorest country. Teachers are not being paid, and millions of children have been affected by school closures. UNICEF is working to provide all the children of Yemen with basic educational services. © UNICEF/UN057341/Al-Karim

Yemen's children did not start the war, but they are paying the highest price

Yemen's children did not start the war, but they are paying the highest price. Every child deserves a healthy childhood, a quality education and hope for the future. UNICEF and partners have been on the ground in Yemen since before the conflict escalated in 2015, delivering lifesaving services and supplies, and supporting and strengthening family coping mechanisms. UNICEF will continue to stand with the girls of Yemen, and with all children affected by war and poverty.

Help UNICEF give hope to the children of Yemen. Your contribution can make a difference.