When it comes to natural disasters, Haiti is the fifth most vulnerable country in the world — and third least able to cope. Yet, since 2010, Haitians have been sorely tested.

On January 12, 2010, a 7.0-magnitude earthquake struck, killing over 300,000 people and injuring 300,000 more. Nine months later, cholera broke out in Haiti for the first time in more than a century. The worst in recent history, the outbreak caused 820,300 suspected cases of the disease, claiming 9,762 lives over the next eight years.

Since then, Haiti has had little relief from disaster and deprivation. In 2016, Hurricane Matthew killed at least 1,000 people. The Category 4 storm, which caused considerable damage and polluted the water supply, was a harsh reminder of just how vulnerable Haiti’s families and children remain.

In 2019, the chronic food and fuel shortages sent thousands of protesters into the streets demanding action. The resistance and ongoing unrest culminated in country-wide shutdowns, first in February, then again in September and October. The turmoil disrupted children’s educations and further endangered their health and well-being by blocking their access to hospitals and other essential social services. According to the UN Office for the Coordination of Humanitarian Affairs, high inflation and rising food prices in Haiti are expected to push the number of Haitians who lack sufficient food over the four-million mark in 2020.

Due to these deteriorating conditions, Haiti now ranks last among the Caribbean and Latin American nations for guaranteeing children’s rights. In 2020, 4.6 million people need humanitarian aid, including 1.9 million children.

Why support UNICEF? It’s the smart way to make your money go further for children

Meet the Children of Haiti 12-year-old Rosemaine Jean knows far more about cholera than any child should, since her 13-year-old brother, Alexis, came down with the waterborne disease. "He washed his hands with dirty water, and then ate," she explains. During a weeklong stay in a medical clinic, Alexis nearly died. After watching him suffer, Rosemaine took it upon herself to learn how to treat her family's well water with UNICEF-provided purification tablets so she could wash their water jugs, food and clothes. Keeping herself and her 10 siblings disease-free is a chore Rosemaine relishes. It’s also helped shape her future plans: "I'd like to become a nurse after I finish school." 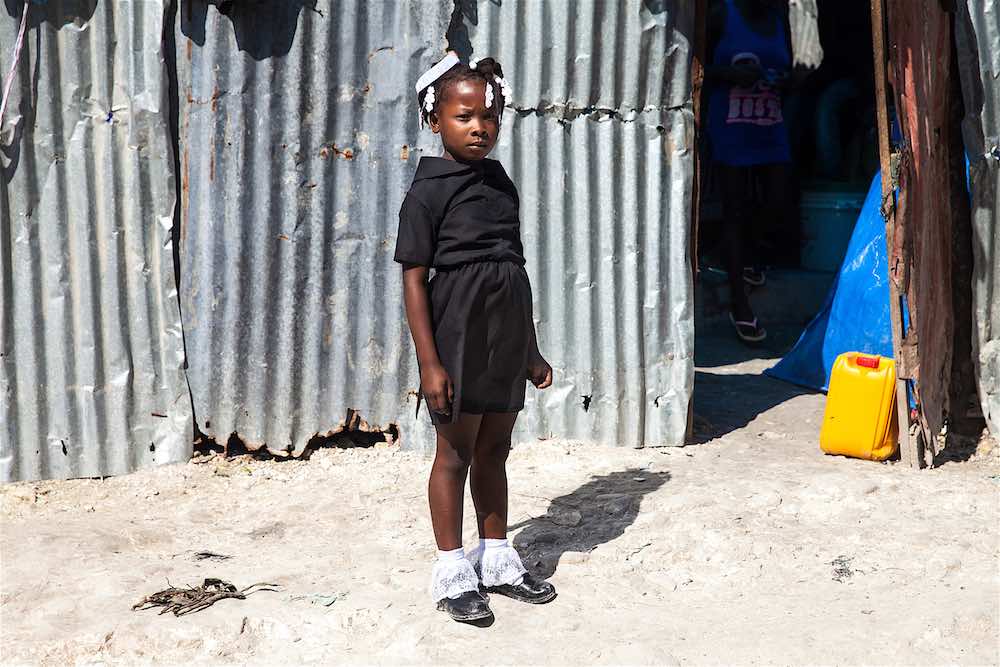 When Hurricane Matthew passed over Haiti in early October 2016, it devastated entire neighborhoods and destroyed livelihoods. Eight-year-old Loudina was orphaned by the hurricane. "I miss my mom. She took good care of us," she says. "The wind came and a house fell on top of her.” After the hurricane, UNICEF set up Child-Friendly Spaces so Loudina, her siblings and children like them would have a place where they could receive support from caring adults who are trained to help children recover from trauma. UNICEF Child-Friendly Spaces provide children with a safe environment to receive counseling, learn, play and heal after disasters. When Sabrina was just a toddler, her biological mother abandoned her, sick and malnourished, at a hospital. A UNICEF partner placed her with a foster family, so she didn’t have to be institutionalized. Tragically, most of the Haitian children living in orphanages today are there because their parents cannot provide for them. UNICEF supports the foster family network, so more kids can grow up in a loving home. Now 7, Sabrina has been living with her family for five years, happily attends school, and studies hard because she has big plans for her future: “I want to become a professor one day.”

UNICEF and partners are working tirelessly all over the world to save and protect children. With a presence in 190 countries and territories, UNICEF has helped save more children’s lives than any other humanitarian organization in the world.