“We are witnessing a worrisome trend. Cyclones, droughts and other extreme-weather events are increasing in frequency and intensity. As we have seen in Mozambique and elsewhere, poorer countries and communities are disproportionately affected. For children who are already vulnerable, the impact can be devastating.” –UNICEF Executive Director Henrietta Fore

What is a cyclone?

A cyclone, also known as a tropical cyclone, occurs when winds rotate inwards to low atmospheric pressure over warm tropical or subtropical waters.

The terms “cyclone” and “tropical cyclone” are synonymous and used to identify both the general weather phenomenon (circulating winds over bodies of water) regardless of wind strength and the formation location of intense cases (differentiating itself from hurricanes and typhoons).

Tropical cyclones fall into three categories, depending on wind speed:

In short, tropical cyclones are similar, if not the same, to hurricanes and typhoons. However, their main differentiator is the location where the tropical cyclone is formed.

Over 500 million children live in extremely high flood occurrence zones. When a cyclone hits, heavy rains and flooding can devastate coastal and inland areas and cause landslides, conditions that can easily turn fatal for children.

With entire communities and cities swallowed whole, children have no choice but to leave their homes in search of safety—sometimes even orphaned and alone.

Further, flooding can also disable sanitation facilities and contaminate water supplies, breeding grounds for deadly waterborne diseases. Without adequate supply, sewage systems fail and there is insufficient water for basic hygiene needs. Access to safe water to maintain proper hygiene and sanitation is critical, and even more so amidst COVID-19.

While cyclones can develop at any point, most are common around harvest season, which can have a major impact on agriculture. If crops are destroyed, kids are most likely to suffer from malnutrition, especially when damaged roads and bridges keep humanitarian aid from reaching the families and children who need help.

Cyclones can be so brutal that the United Nations World Food Program declared Cyclone Idai (2019) as one of the world’s toughest humanitarian crises, ranking the emergency as Level-3—on par with Yemen and Syria. In Mozambique alone, floodwaters from Idai covered an area the size of New York City, Washington, D.C., Chicago and Boston combined, damaging up to 50 percent of Mozambique’s annual crops just before harvest.

Cyclones rob kids of the security they need to stay healthy, develop and grow. In times of disasters, children are disproportionately affected. "This is not business as usual," said Gautam Narasimhan, UNICEF Senior Advisor on Climate Change. "Climate change is linked to rising sea levels and the increase in rainfall associated with cyclones, thus causing more devastation in coastal but also inland areas. In the short term, the most vulnerable children are at risk of drowning and landslides, deadly diseases including cholera and malaria, malnutrition from reduced agricultural production and psychological trauma — all of which are compounded when health centers and schools are impacted. In the long term, cycles of poverty can linger for years and limit the capacity of families and communities to adapt to climate change and to reduce the risk of disasters."

"Soon after the wind and rain started, we heard a large rumbling sound, the likes of which we had never heard before.”

This is the beginning of 15-year-old Praise Muferi's painful recollection of the day that Cyclone Idai barreled through her hometown, Ngangu, in Zimbabwe March 2019. She and her 10-year-old sister, Morefaith, were at home in bed when they heard the noise then rushed outside, where they discovered water and boulders tumbling down the mountain toward their house. Though the girls tried to flee, Morefaith's feet got stuck in the mud and when the avalanche caught up with her, she was buried in the rubble. 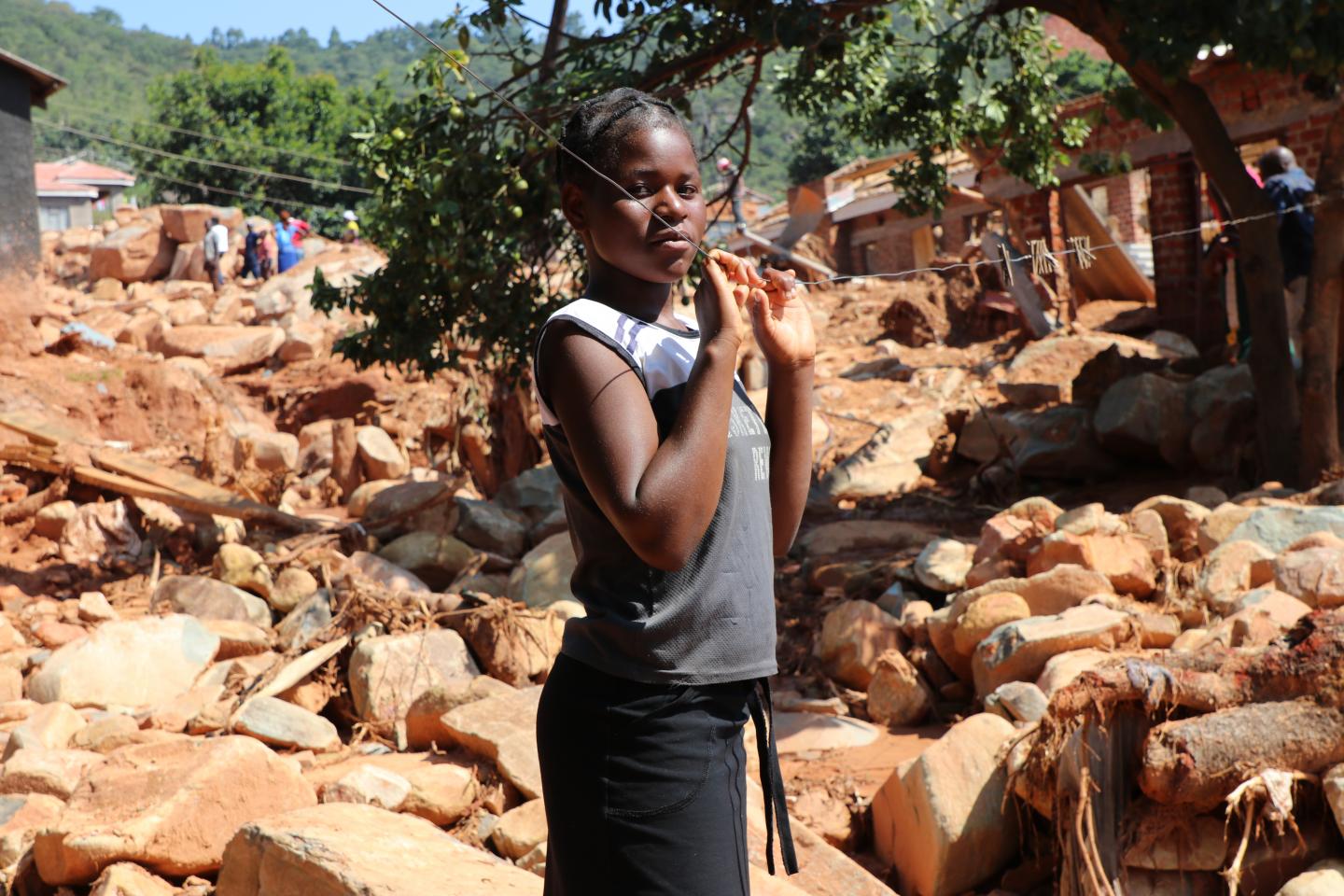 Praise stands among what used to be her neighborhood in Ngangu Township. Most houses have been completely buried by the rocks that tumbled down the mountain when Cyclone Idai hit. ©UNICEF Zimbabwe/Elizabeth Mupfumira

UNICEF responds to an average of 300 emergencies a year, including some of modern day’s worst cyclones.

When cyclones and other natural disasters strike, UNICEF is among the first on the ground—sometimes even days before to preposition supplies—and the last to leave. UNICEF hosts the largest humanitarian supply warehouse in the world, and through its network, UNICEF is able to deliver lifesaving supplies to anywhere within 48­–72 hours.

Once the immediate crisis has passed, UNICEF works to prepare communities for the next emergency by assessing risks and helping strengthen health care systems, schools and other community services to become more extreme-weather resilient.

Help cyclone victims rebuild their communities and prepare for the next emergency here. 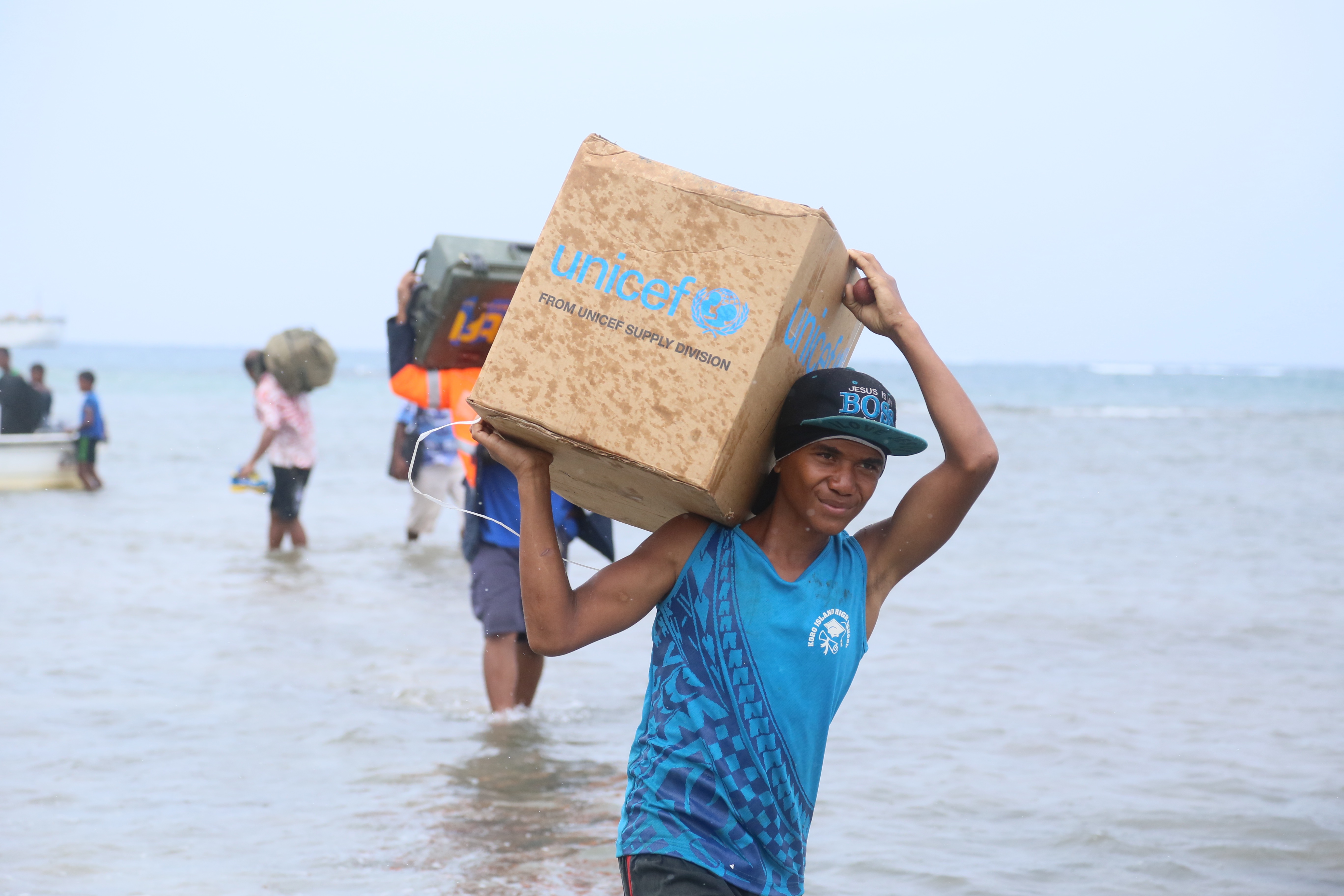 Category 5 Tropical Cyclone Winston made landfall in Fiji on February 20, 2016. In the wake of Cyclone Winston, UNICEF's main concern was for children, pregnant women and breastfeeding mothers across Fiji. Pictured above are UNICEF water, hygiene and sanitation (WASH) supplies being offloaded to Koro Island, one of the worst affected islands hit. ©UNICEF/UN011310/Hing